Mamelodi Sundowns head coach Pitso Mosimane says securing a berth in the CAF Champions League knockout stage early is a huge relief to the system of a team that is also bidding for the defence of the Absa Premiership title.

Speaking shortly after Sundowns’ 2-1 win over USM Alger of Algeria in Pretoria on Saturday, Mosimane said the result panned out the way his side had anticipated, given the Brazilians’ solid start to the group stage campaign where they remain unbeaten in four games.

“The game went as we expected. We knew that their goal would come from crosses and might not come from interplay and that’s exactly how we conceded the goal. Fortunately we managed to cancel their goal as quickly as possible.

“But what’s important was to qualify and we’ve done that with two games to go. I’m happy with that,” Mosimane told the media during a post-match conference at Loftus Versfeld Stadium, where Sundowns heaved a sigh relief after the Algerians squandered a chance for an equaliser when they missed a penalty six minutes from regulation time.

With their feat, the Brazilians reached the quarterfinals with two games to spare, courtesy of first half goals by Thapelo Morena and Sibusiso Vilakazi that shot their side to 10 points on top of Group C.

The win also extended Sundowns’ unbeaten home run in the premier continental club competition to 17 matches since 2017 as they attained a fourth knockout stage qualification in five years.

While the remaining two matches later this month against Pedro de Luanda of Angola and Morocco’s Wydad Athletic are academic, the Sundowns versus Wydad final pool clash on January 31 should determine who wins the group.

In the draw for the quarterfinals, the winners across the four groups will be seeded, meaning they will host the second legs.

“There’s Esperance, Al Ahly, Zamalek, TP Mazembe, Raja Casablance, Etoile du Sahel [in the running] ... qualification is good but these teams are strong. But we have the experience. You know when they come to Pretoria it’s not easy. We control the game and we have a chance to win at home.”

Like Sundowns, DR Congo powerhouse Mazembe are the only other side to have reached the last eight with two group games remaining after the weekend’s fixtures.

Added Mosimane: “If you want to win the Champions League, you have to through Al Ahly, Esperance, Mazembe, maybe Zamalek, Raja... but they’ll also have to cancel each other [en route to the final].

“We can’t say much but you’ll have to face any of those five/six teams if you want to progress to the last four. In 2016 nobody knew us. Now for the last three years they know us now and we gained a little bit of experience.

“I mean it’s the first time in history we qualify [for the knockout stage] with two games to go. But not the first time we beat a north African team home and away because we did that with Zamalek in 2016.”

Mosimane’s concern, however, is his side’s struggle to win away from home especially against north African opposition until their 1-0 win at USM Alger last month.

The Clever Boys lost 2-1 to Libyan side Al-Nasr who staged the game at a neutral Pedro Stadium in Cairo, Egypt owing to political instability in Libya.

Wits are without a win after four pool matches. 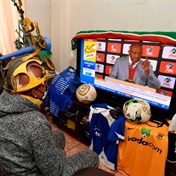