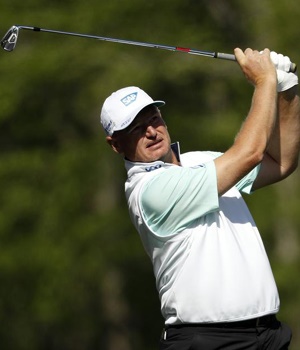 Ernie Els hits his tee shot on the 12th hole during the first round of the 2016 The Masters golf tournament at Augusta National Golf Club. Mandatory Credit: Rob Schumacher/USA Today Sports
Ernie Els made history at the Masters yesterday by recording the highest-ever score at the par-4 first hole after six-putting for a nine.
The four-time major winner earned a lot of respect after his round on the Augusta National Golf Club as he faced the press, trying to explain what went wrong after playing his third shot to within two metres of the hole. He then needed six putts to finally sink the ball.
“I can’t explain it. It is just something that is short up there somewhere. You just can’t do what you normally do. It is unexplainable, a lot of people have stopped playing the game getting that feeling. I have made thousands of three-footers. I just could not get the putter back and then I sort of lost count out there.”
In his interview, he kept on repeating that it was unexplainable.
“I can putt with a stick, but if you have snakes and stuff going up in your brain, it is difficult. It is something that withholds you from doing your normal thing.
“It is a very tough situation. I am not sure how I did it, but I stayed out there.”
Els then bogeyed the fourth to go six over, but pulled one back at the fifth. His poor putting form continued on the back nine as he double-bogeyed 11 and dropped two further shots at 17 and 18. His sole birdie on the back nine came on the par-5 13th as he ended the day on 8-under.
After his round, he said that he was still hoping to make the cut. “I’m going to try to regroup for tomorrow. Check what the scoring is and see what I have to shoot to make the cut and then go from there.”
On a disappointing day for South Africans, none of them failed to break par, as defending champion Jordan Spieth takes a two-shot lead into the second round. The 22-year-old shot a 66 to be six-under and lead by two from Danny Lee and Shane Lowry.
Louis Oosthuizen is the best of the South Africans after carding a par 72.
He said that he struggled with the strong wind and could not play the par-5s as aggressively as he would have liked to. “You always feel like you have to birdie the par-5s. That’s where you feel you need to score, but you need to be careful as well. You can easily just make a bogey and that’s going to put you back on the field.
“I hit it well today, I was 3-under on the par-5s, but I made a few stupid mistakes on some of the par-4s where I couldn’t really even have a chance for par I left myself plenty of length for par. The par-5s are key, but you need to make sure, especially in these conditions.”
He said that he would not change his game plan for Friday’s second round.
“It’s tough to be really aggressive around here in these conditions. You can so easily play yourself completely out of the tournament. I think that you got to play it the way you see it.
“But hopefully you make a few 20- to 30-foot putts and get up there. I think aggressiveness is probably going to start late Sunday, if you really have a chance to win and you’re two or three behind, then you’re probably going to take a few more pins on than you were going to.”
The 2011 Masters winner Charl Schwartzel was on even par after the 14th, but then dropped four shots – including a double-bogey on the 15th – coming in. His score of four-under sees him tied in 59th and in danger of missing the cut.
Branden Grace was just one shot better after signing for a 75, while the 2008 champion Trevor Immelman, who has been struggling with injuries since then, is on five over.
We live in a world where facts and fiction get blurred
In times of uncertainty you need journalism you can trust. For only R75 per month, you have access to a world of in-depth analyses, investigative journalism, top opinions and a range of features. Journalism strengthens democracy. Invest in the future today.
Subscribe to News24
Related Links
South Africans are on form. It’s time one wins a golf major – Louis Oosthuizen
Can Spieth give another masterclass?
Schwartzel wants others from Mzansi to conquer the US
Next on City Press
Tim Spirit | So far so good, but Broos must be more tactful