Winning Rugby Championship would boost Boks ahead of World Cup 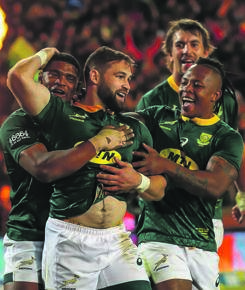 The Springboks are on the verge of winning the Rugby Championship. Picture: Gordon Arons / Gallo Images

Rassie Erasmus’ Springboks find themselves on the verge of winning their first Rugby Championship if they win their match against Argentina in Salta on Saturday.

Winning the Rugby Championship in a World Cup year has always been a curse because the winning team has not gone on to find victory at the major event.

The Springboks have had trouble playing Argentina in Argentina recently. Why is that?

I don’t think that should be the norm, but, as you say, it’s come to a point where it’s not a surprise. For years, we did not even lose to Argentina. I think Heyneke [Meyer] was the first to lose to Argentina. It was almost a case of 99.9% of the time, we’d beat Argentina.

They have become a difficult beast to beat in Argentina but, although that’s generally been the case, we’ve always been good enough to beat them anyway.

So we’ve probably not been as good as we should have been.

To be fair, when they had not beaten the Boks, there was always an aura of belief in our camp and doubt in theirs.

What’s different now is their belief that they can beat us, when, in the past, they always doubted they could.

But I believe the Boks are a different beast now because what they’re doing against New Zealand is making them a powerhouse.

What makes the Boks a different beast for you?

The two things that have stuck out for me are how they scramble and fight for each other defensively, which is a sign of a happy team. The second thing is how they just don’t give up – just look at how often they’ve come back in games.

Those are things you can’t really coach, it comes with the ambience and the vibe in the group. From a technical perspective, they’ve gone back to what they’re good at, things that South African rugby does well. Sometimes that’s playing without the ball – there’s nothing to be embarrassed about regarding that – look at how many games we win when we don’t have possession because we defend very well.

Rassie’s also created a serious bench by playing seniors such as Frans Steyn and Beast Mtawarira off the bench, which gives them and the public much more confidence. What’s the secret ingredient to troubling the All Blacks as the Boks are doing at the moment?

The way the Boks have played has kept that scoreboard close for long periods of time and, eventually, the All Blacks start to doubt themselves.

It sounds negative, but if the test match is “boring” it actually suits us. If it’s 6-3 after 60 minutes, South African teams like it because that’s not what New Zealand teams are used to.

A guy like Beauden Barrett will miss two or three kicks, but they’ll win 55-17, so it never looks like it’s poor.

But if you hold them to one try and he misses, as he did last weekend, then, all of a sudden, that pressure is different pressure.

If the Boks win in Argentina they’ll probably win the Rugby Championship for the first time since winning the Tri-Nations in 2009. But no team has won a Rugby Championship in a World Cup year and gone on to win the World Cup, so would it be a good or bad thing?

There are a lot of ways of looking at it; this year’s tournament is shorter than the Tri-Nations years when we still played home and away, so I don’t think that’s relevant this time.

In the absence of the Super Rugby momentum your team had, when the Bulls and the Sharks contested the final in 2007, will winning the Rugby Championship be that momentum?

That’s what you can’t underestimate. That’s why people can say what you’ve just said about teams that win the Rugby Championship in World Cup year – it’s because we have not won it.

If we’d won the Rugby Championships in those years, we’d have won the World Cup as well because we’re a nation that plays off momentum.

Having seen the first two games, what areas would you be looking at to fix in the Boks’ next three games before the World Cup?

We can lose to New Zealand in the opening game at the World Cup, but that’ll be irrelevant because we’re going to need to win three games after that from the quarterfinals.