Sin bins have been used in rugby for years. The idea – for those of you who are not of this planet or have been living under a stone – is a means whereby a player, instead of being banned from taking further part in a game, is forced to leave the field of play for 10 minutes.

Once the time has elapsed, he can return to the game. I say he, but this also applies to women who play rugby.

It’s been bandied around for some time now that this system should be introduced in football.

And it appears as if the idea is gaining more traction and might be used in the not-too-distant future.

But the question is: Will it work?

I’m talking about the premier league, of course.

In my opinion, football players are getting away with far too much in the modern game. They appear to have a free hand. You don’t have to be an expert lip-reader to understand the abuse they aim at match officials.

In my time, foul and abusive language was a straight red card, hence my dismissal (red card) of the former Manchester United and England captain, Bryan Robson, at Ellis Park in 1993.

Today, it has been downgraded to a yellow card. This gives unruly players the freedom to say what they like and just get a yellow card.

This was a big mistake, in my opinion, and I guess we’ll pay for it in the years to come.

Getting back to the issue of sin bins.

In Ireland, we have our own local Gaelic football and hurling. They have a system whereby a player guilty of a serious misdemeanour gets a black card. Referees still carry the yellow and red.

If a player gets a black card, he is removed from the field of play, but can be substituted, thereby restoring the team to full strength.

The other system applies when a player gets a red card and cannot be substituted. And, of course, two yellows equal a red.

In theory, I guess sin bins will give a player time to cool down before coming back on to the field.

However, on the other hand, he could be more angry and want to take retribution on the opponent who was the cause of his being sent to the sin bin in the first place.

An interesting statistic was found in the UK.

Of the 31 league matches that are being trialled with sin bins, 84% of referees, 77% of managers and coaches, and 72% of players are in favour of the system being brought in permanently.

Cards will still be used with cautions for foul play and unsporting behaviour; the yellow card will be used to indicate a sin bin, complemented by the referee pointing clearly to the sidelines with both arms.

If a player is sin-binned for a second time in a match, the player will not be allowed to return to the field of play, but can be substituted.

Football Association chief executive Mark Billingham said: “Dissent is a key part of the game that needs to be tackled, and our pilot phase has proved that sin bins work well. The trial showed such a huge effect on behaviour that we want to roll it out to the whole game and make it more enjoyable for everyone.” 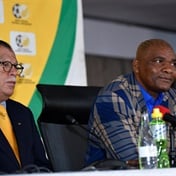 Read more on:
football
ON MY RADAR
for subscribers
On My Radar | Take care as you step into the metaverse