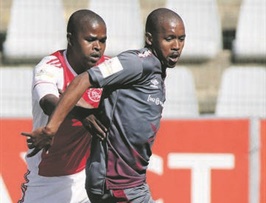 D-Day in the GladAfrica Championship is here. The iconic Swallows could complete their resurrection from the ashes today, while the legendary Jomo Cosmos could go down to the ABC Motsepe League.

But a disciplinary case, which will be heard urgently this morning, could put a spanner in the works in the battle for survival.

City Press can reveal that the matter between two Mpumalanga sides – Mbombela United and TS Sporting – regarding the registration of eSwatini international Sabelo Ndzinisa is going for arbitration before the final round of matches this afternoon.

But, at the summit of the NFD table, neither Swallows nor Ajax Cape Town will this afternoon complete an emphatic comeback to the premier division. The two sides have gone through hardships in the past few seasons and, for fundamentalists of local football, the return of either bodes well for the local game.

The two teams are tied on 54 points, with a game remaining. The contenders from Soweto are ahead by one goal. It does not get any closer than this.

Swallows close their season against Tshakhuma Tsha Madzivhandila (TTM) at Makhulong Stadium, while Ajax face Mbombela United at Rand Stadium. Both matches kick off at 1.30pm.

Although on top, even with a win Swallows could still slip up and finish second if Ajax improve their goal difference.

For this to happen, Ajax will need to better Swallows’ tally by at least one goal. If they score more goals than Swallows, the Urban Warriors will be in a better position to gain automatic promotion.

Whichever club does not earn automatic promotion will get a second chance to regain a spot into the top flight via the playoffs alongside TTM and the 15th-placed finisher in the Absa Premiership.

Swallows coach Brandon Truter said the team had exceeded the mandate he was given, of finishing in the top eight.

I got the team when they were 14th on the log. The target was to finish in the top eight. At the time, the team had five points and many people thought the writing was on the wall. Of course, Swallows have a history in South African football and the pressure was there to get them up. The league [title] is now there for the taking. It’s for us to lose now; it’s in our hands
Brandon Truter, Swallows coach

“I got the team when they were 14th on the log. The target was to finish in the top eight. At the time, the team had five points and many people thought the writing was on the wall. Of course, Swallows have a history in South African football and the pressure was there to get them up. The league [title] is now there for the taking. It’s for us to lose now; it’s in our hands.”

Truter has played rescuer for several teams in the division, including Richards Bay, Royal Eagles and Cape Town All Stars.

He explained what makes the NFD so difficult: “The first division is tough because it’s a promotional league. It’s a difficult league that everyone wants to win,” Truter said.

“Coaches don’t get two- or three-year contracts usually. Once you finish outside of the promotion spot, it’s seen as a failure. Owners invest lots of money and expect instant results.”

On the other hand, Ajax coach Calvin Marlin will be crossing fingers that Swallows slip up.

Fight until the end

The Mother City club have been at the top of the standings since January.

Marlin said his team would fight until the very end.

“It’s not over yet. There is still a lot to fight for. In football, anything can happen. So we need to make sure that we give our best so that fortune can favour us,” Marlin said.

Meanwhile, at the bottom, Cosmos are one point ahead of TS Sporting. Only a victory over the University of Pretoria will secure their spot in the NFD for next season.

Royal Eagles have already been relegated and one team has to go down with them. Sporting have 29 points, while Ezenkosi are on 30.

We live in a world where facts and fiction get blurred
In times of uncertainty you need journalism you can trust. For only R75 per month, you have access to a world of in-depth analyses, investigative journalism, top opinions and a range of features. Journalism strengthens democracy. Invest in the future today.
Subscribe to News24
Related Links
Swallows fly in to challenge as they edge Ajax 1-0 in top-of-the-table Championship clash
What’s keeping Jomo Cosmos at the bottom?
New-look Swallows ready to take off
Next on City Press
It’s a big game and we’re up for it, warns Bucs’ Mosele ahead of epic clash with Sundowns