Simo Dladla’s Natal Rich Boyz back in the spotlight 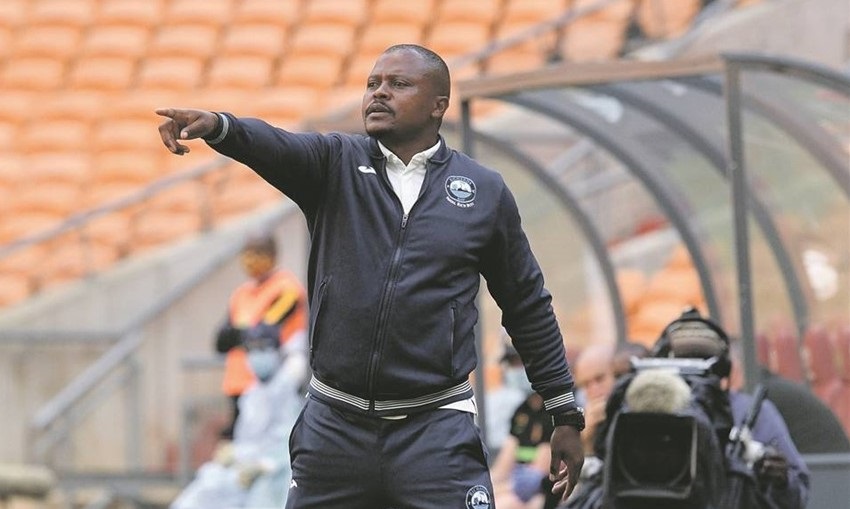 Richards Bay head coach Simo Dladla is a trailblazer of note in the NFD. Not only did his team slay Kaizer Chiefs in the Nedbank Cup last 32, but the Natal Rich Boyz are also on top of the GladAfrica Championship table.

For the man who plotted the win over Amakhosi though, being a professional coach was not always part of his plans.

The 41-year-old, whose team earned new admirers following their elimination of Chiefs from the Ke Yona Cup at FNB Stadium three weeks ago, went into coaching as a last resort following a difficult chapter in his life.

The former Manning Rangers and Bush Bucks player suffered a career-ending quad injury while playing in China a decade ago.

After that forced him into early retirement in 2010, Dladla invested his life’s savings in a trucking business that later went bust. He lost everything and returned home to KwaNyuswa in Botha’s Hill in KwaZulu-Natal.

While idling at home, he assembled a team of local youngsters and started coaching them while trying to figure out his next move.

“I invested about R500 000 of my savings in a trucking business and lost all my money. Throughout my playing career I was saving and I lost it all due to the failed venture,” Dladla told City Press.

“Things were tough and I moved back home. While I was sitting at home I decided to put a team together and coach.

“My team comprised players who nobody wanted and I was able to turn them into a strong team. I didn’t really know where that would take me. That’s when I realised I should pursue coaching.”

In 2013, Dladla earned his CAF B licence and joined Real Kings in the ABC Motsepe League. He was assistant to Siyabonga Mdluli before becoming the head coach the following year. In 2016, he guided Kings to the NFD promotion.

Without doubt we want to see ourselves playing in the Premiership. It’s high time we got promoted
Simo Dladla

“I did a bit of everything when I was at Kings. I was the coach, general manager, contract negotiator ... I learnt a lot about running a football club,” said the tactician who counts Mamelodi Sundowns boss Manqoba Mngqithi as a friend and mentor. After five seasons with Kings in the second tier of South African football, Dladla joined Richards Bay as coach early last year as a replacement for the well-travelled Ian Palmer.

In his first full season at Bay, Dladla has made an immediate impact. This season they are gunning for promotion to the lucrative DStv Premiership.

“Without doubt we want to see ourselves playing in the Premiership. It’s high time we got promoted. I do not want to go to the Premiership by being appointed an assistant coach at one of the clubs,” he said.

At the halfway mark of the season, Bay are the bookies’ favourites for promotion. Mid-week they defeated Uthongathi 2-1 to solidify their grip atop the standings with 27 points from 15 games – four points ahead of trailers Sekhukhune United, JDR Stars and Royal AM, who are all on 24 points.

Dladla is hoping to go as far as possible in the Nedbank Cup, a competition that has proved to favour the so-called small clubs.

“Although our main goal is to gain promotion, I would never prepare my team to go into a game to lose. We will give this cup competition our best and whatever it takes to push through.

“We have already beaten Chiefs so I don’t see why we cannot defeat the other teams,” said Dladla, ahead of their all-first division match against Sporting at Mbombela Stadium in Mpumalanga.

Bay’s elimination of Chiefs from the R7 million competition remains their greatest achievement so far, according to Dladla.

“Indeed, everyone was on cloud nine after we beat Chiefs. That victory was a great achievement for us and it proved to us that we can compete with premier division teams.

“It doesn’t get bigger than Chiefs. They are a big club in the country and in Africa,” Dladla said.

We live in a world where facts and fiction get blurred
In times of uncertainty you need journalism you can trust. For only R75 per month, you have access to a world of in-depth analyses, investigative journalism, top opinions and a range of features. Journalism strengthens democracy. Invest in the future today.
Subscribe to News24
Related Links
Resurgent TTM face test against high flying Swallows in Nedbank Cup
Experience helps Pirates overcome a gutsy Uthongathi
Ke Yona upsets could be on the cards as Pirates and Chiefs face tricky NFD opponents
Next on City Press
Siyabonga Nomvethe helps reawaken sleeping hometown giant at AmaZulu