Steyn and co dream of taking on Lions 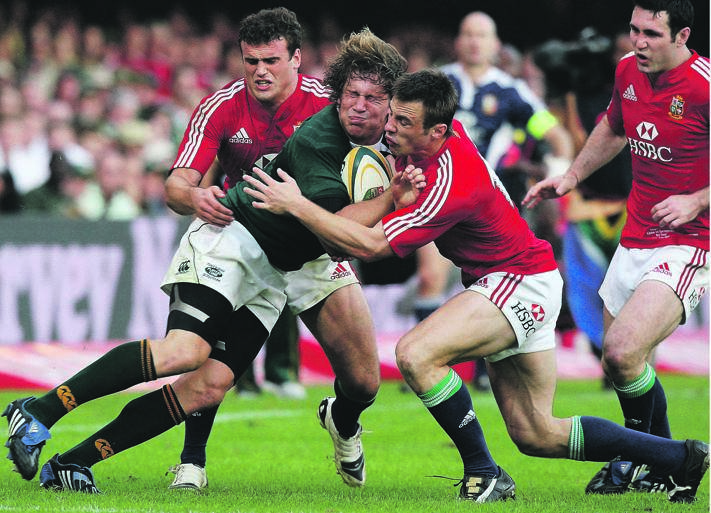 Frans Steyn, who featured for the Springboks against the British & Irish Lions at Kings Park Stadium in 2009, could make history if he features in next year’s tour. Picture: David Rogers / Getty Images

IN PARTNERSHIP WITH THE BRITISH & IRISH LIONS

History beckons for Springboks utility back Frans Steyn in next year’s test series against the British & Irish Lions.

Steyn, who kicked the most glorious of penalties to ensure the Springboks’ 15-12 win against England in the 2007 World Cup final in Paris, France, and played a significant part in last year’s World Cup success, has returned to South Africa after several years of playing club rugby in France and Japan.

His reason: the British Irish Lions.

Steyn wants the double as much as he wants to give back to South African rugby.

The British Irish Lions only tour South Africa every 12 years and Steyn would be the exception in playing them twice during an international career.

The first Springbok centurion and test points record holder, Percy Montgomery, made his test debut against the Lions in 1997, but retired in 2008.

He immediately joined the Boks coaching staff and enjoyed the 2-1 series win over the Lions in 2009. But Montgomery will tell you that he remembers the series he lost as a player more than the one he won as a coach.

The Lions are huge in South African rugby history and last year’s World Cup Rugby player of the year Pieter-Steph du Toit told SA Rugby magazine that the Lions series was even bigger than the World Cup because it happens so rarely. Rassie Erasmus, SA Rugby’s national director of rugby and the Springboks’ World Cup-winning coach, concurs on the challenge of the Lions.

As a player, Erasmus made his test debut against the Lions in 1997 in what he describes as his international career highlight. A traditionalist known for his appreciation of what matters in rugby, he has always subscribed to the magnetism of the Lions.

Privilege of wearing the jerseys

“There are players who have been to three World Cups and finished their careers with a winner’s medal and yet never got to play against the Lions,” said Erasmus.

“They only come around every 12 years for our players, and only a few of them ever have the privilege of wearing the Springbok jersey in a Lions series. The Lions have not lost a series since they were last here a decade ago, and they will present a next-level challenge.”

Last year’s World Cup-winning fly half Handré Pollard was just 15 when the Lions last toured South Africa. He admitted that, outside of a World Cup final, there couldn’t be a bigger occasion for a South African player than a test series against the Lions.

It is a childhood dream of mine to play for the Springboks in a Lions series.
Handré Pollard

“It was probably the first thing we spoke about after we won the Rugby World Cup,” said Pollard.

“We said to each other: ‘Listen, the Lions are coning next year and it is going to be awesome.’ It is a childhood dream of mine to play for the Springboks in a Lions series. I was just 15 when Morné Steyn kicked over the penalty at Loftus to clinch the 2009 series. I was just a young boy dreaming of playing for the Springboks, but that feeling has stuck in my head and never gone away.

“The possibility and realisation of being part of something like that would be like a dream come true, really. The Lions series will be epic.”

“We will play in traditional and new venues against the world champions. It will be an unforgettable experience for the players and travelling supporters. We are very much looking forward to touring this wonderful country,” Gatland said.

Ian McGeechan, who played for and coached the Lions in South Africa, said that being in the country as part of the Sea of Red was an experience never to be forgotten.

South Africa has a special atmosphere that you simply can’t find anywhere else
Ian McGeechan, former Lions player and coach

“South Africa has a special atmosphere that you simply can’t find anywhere else,” he said.

The British & Irish Lions tour next year will be the biggest sporting event this country has seen since the 2010 Soccer World Cup. The famed Lions supporters will add flavour to the landscape and a much-needed boost to the country’s economy. But South Africa’s accessibility and affordability have been at the forefront of the ticket-pricing structure. – Staff reporter

We live in a world where facts and fiction get blurred
In times of uncertainty you need journalism you can trust. For only R75 per month, you have access to a world of in-depth analyses, investigative journalism, top opinions and a range of features. Journalism strengthens democracy. Invest in the future today.
Subscribe to News24
Related Links
Some coaches embrace six-two split that Boks used in Japan
Springboks play catch-up ahead of Championship
Side Entry: Why Rassie could be tempted to move to England
Next on City Press
Silver in the bag: Tatjana Schoenmaker delivers SA’s first medal at Tokyo Olympics

Sign-up to our newsletters and get the latest results and info in your inbox.
Voting Booth
The Electoral Commission of SA (IEC) has accepted the report by former Deputy Chief Justice Dikgang Moseneke proposing that South Africa’s local government elections be postponed to February.
Please select an option Oops! Something went wrong, please try again later.
I was looking forward to the elections in October
38% - 66 votes
Postponement makes sense
48% - 83 votes
They should be later than February
13% - 23 votes
Previous Results
The best of 2020
Can you guess who featured in our most popular articles from 2020?