‘Thank you, God, for soccer, for Maradona’ 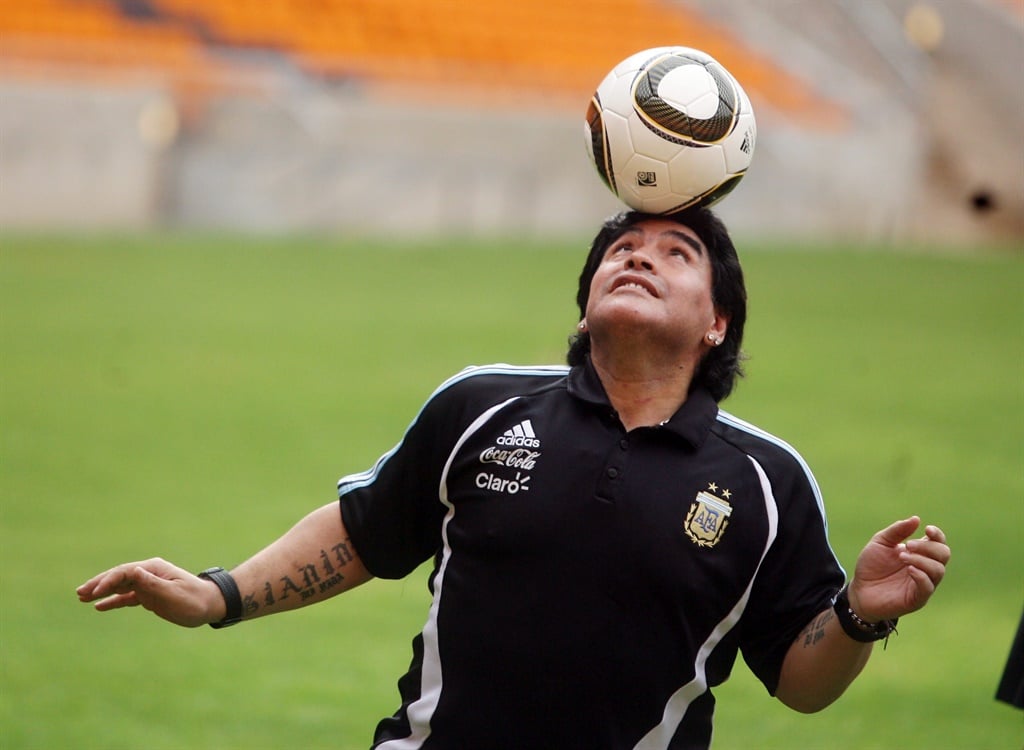 Maradona, arguably one of the best football players ever to grace a professional pitch, whose wild swings in fortune came to personify the flux of his home nation Argentina suffered a heart attack in Tigre, Buenos Aires, after undergoing surgery to remove a blood clot from his brain earlier this month, according to the Clarin newspaper.

Maradona led Argentina to the 1986 World Cup and won league championships in Italy and at home, granting him the sort of iconic status normally reserved for war heroes.

His scoring prowess and flair in slaloming past opponents vaulted him into the hall of soccer fame, but he struggled to cope with the adulation and his battles with addiction became regular global news.

“I saw Maradona do things that God himself would doubt were possible.” After retiring, Maradona developed heart problems caused by cocaine addiction, and he endured wild weight and fitness swings that seemed to reflect his do-or-die attitudes to both soccer and life.

Argentina’s “golden boy” is best remembered for the two goals that dumped England out of the 1986 World Cup.

The quarterfinal in Mexico City was eagerly anticipated, coming just four years after the Falklands War between the United Kingdom and Argentina.

Maradona made sure it was a game few would forget. 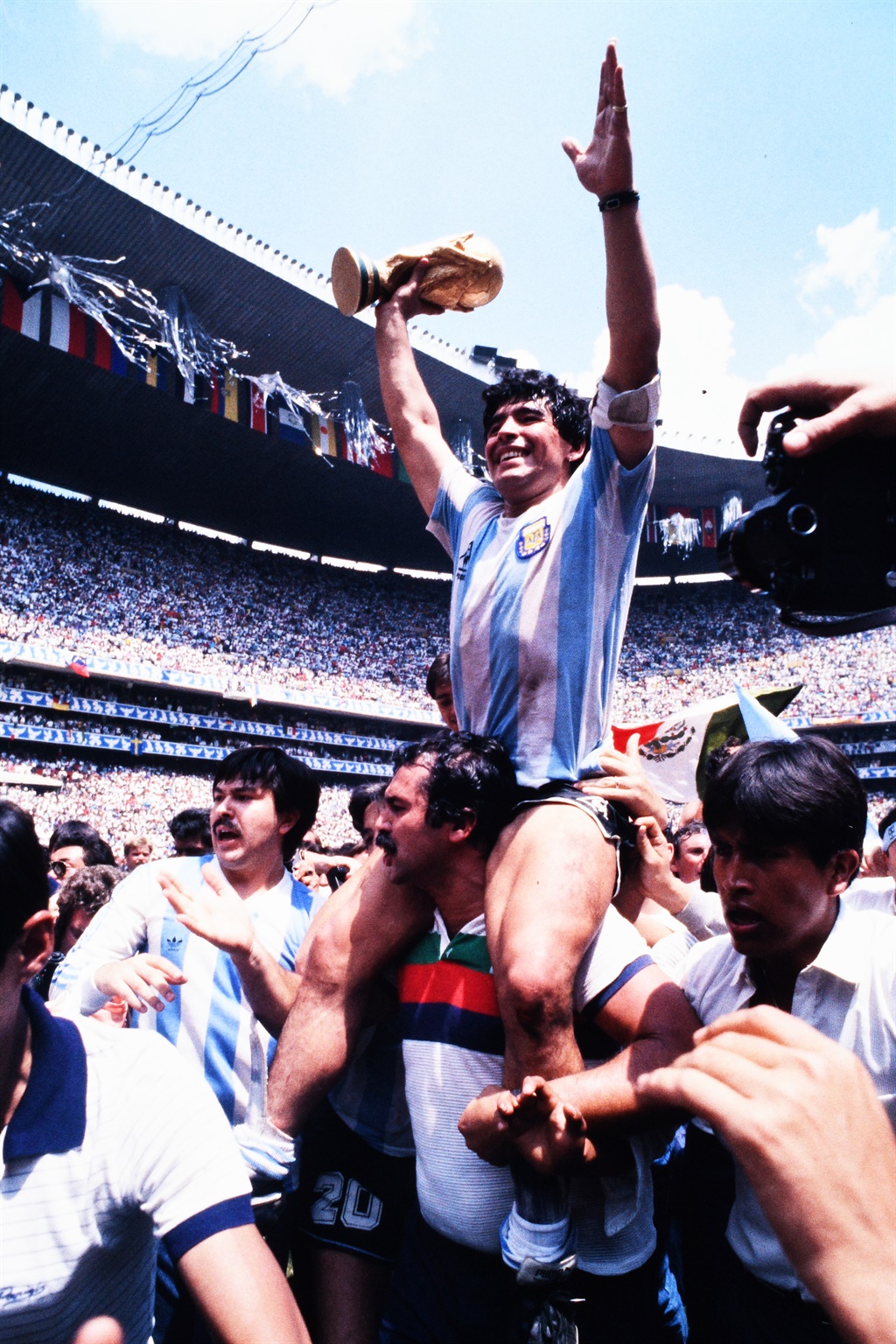 Maradona of Argentina is lifted by his team mates and staffs after winning the Fifa World Cup Mexico final between Argentina and West Germany on June 29, 1986 in Mexico City, Mexico. Picture: Etsuo Hara/Getty Images

Six minutes into the second half, England’s Steve Hodge miscued a clearance, sending the ball high into his penalty area.

Maradona, at 5-foot-5, leapt above 6-foot England goalkeeper Peter Shilton as he tried to punch the ball clear.

Replays showed that Maradona fisted, rather than headed, the ball into the net, a foul the referee missed.

The Argentine No. 10 dedicated the goal to the “hand of God.”

Goal of the Century

While that goal has become one of the most infamous in soccer history, Maradona’s second in the game was voted the best of the 20th century in a 2002 vote held by Fifa, the sport’s ruling body.

After collecting a pass inside his half, Maradona dribbled at full speed past four England players, shimmied around Shilton and rolled the ball into the net from a tight angle just as defender Terry Fenwick slid in to tackle him.

The emotion with which local announcer Victor Hugo Morales called the second goal is etched into national memory.

“What planet did you come from?” he shouted. Then, as he ran out of breath: “Thank you, God, for soccer, for Maradona.”

Argentina won 2-1 and Maradona, its captain, went on to lift the World Cup after a 3-2 victory over West Germany in the final.

Four years later, Maradona guided the national team to another final against the Germans, but this time they lost 1-0.

The 1986 title is the last time soccer-mad Argentina celebrated being world champions despite continuing as a breeding ground for virtuoso offensive players, including Lionel Messi. 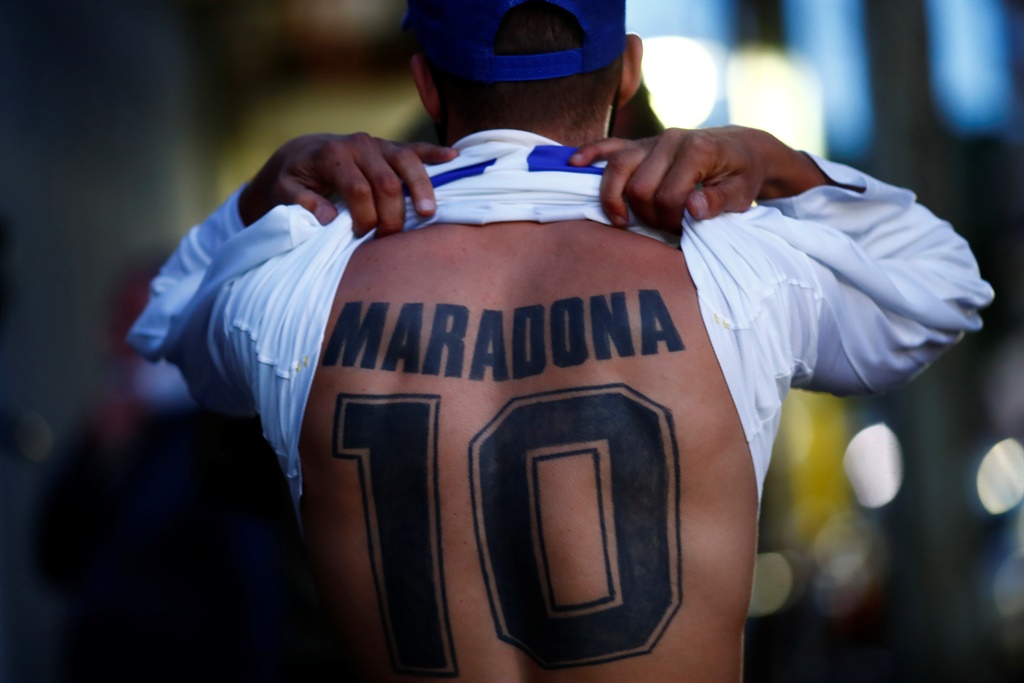 A fan of Maradona shows a tattoo on November 3 2020 in Olivos, Argentina. Personal doctor of Maradona, Leopoldo Luque, confirmed the former footballer will underwent surgery to treat a clot in his brain. Maradona turned 60 on Friday October 30 spent the night of that Monday hospitalized after being admitted with symptoms of depression. Picture: Marcos Brindicci/Getty Images

Born October 30 1960, Diego Armando Maradona’s preternatural talent was noticed when he was just eight on the hardpan fields of Villa Fiorito, a Buenos Aires slum.

Sepia video footage of Maradona as a boy juggling a soccer ball attest to the ease with which he took up the sport, and he nurtured his genius by playing with friends into the night.

Trainer Francisco Cornejo was first to spot Maradona’s potential, signing him for Argentinos Juniors’s youth team, which he led to a 136-game unbeaten run.

Maradona made his debut in the country’s top tier in 1976, 10 days before turning 16, and was the league’s leading scorer for three consecutive seasons from 1978.

But because he was so young, Cesar Luis Menotti, the Argentine coach at the time, left Maradona off the 1978 World Cup roster.

In 1981 he moved to giants Boca Juniors, helping them to win the league championship. View of a mural dedicated to Diego Maradona in the surroundings of the Alberto J Armando Stadium before a match between Boca Juniors and Talleres as part of the third round of Copa Liga Profesional 2020 at Estadio Alberto J. Armando on November 15 2020 in Buenos Aires, Argentina. Picture: Marcelo Endelli/Getty Images

Maradona began an 11-year stretch in Europe in 1982, first with Barcelona, where Menotti would soon arrive, then at Napoli.

In doing so he was a trailblazer, swinging open the gates for the lucrative business of moving young South American stars across the Atlantic.

Barcelona and Napoli paid world-record fees to sign him.

In eight years at Napoli Maradona steered the team to its only two Italian titles and its sole continental silverware, the Uefa Cup.

The team hasn’t won either competition since. Fans in Naples, unused to such success, hoisted Maradona to the status of demigod.

And it was his time there - at least for his supporters - that helps place Maradona above modern-day prodigy Messi on the podium of soccer greats.

While Maradona heaved a mediocre side to glory, Messi has always operated in relative comfort, accompanied by other star players at Barcelona.

Likewise, those who argue Maradona was better than Pele, the legendary Brazil striker, often pivot their argument on Pele’s unexotic club career: He played almost entirely for Santos, in Brazil, only briefly moving to the New York Cosmos when he was past his peak. A fan of Maradona shows a tattoo on of the legend. Picture: Marcos Brindicci/Getty Images

It was also at Napoli that Maradona’s ordeals with managing fame and adulation were exposed.

He became addicted to cocaine and after a 15-month ban for using the drug, he left for Sevilla in Spain in 1992.

A year later, Maradona returned to Argentina with Newell’s Old Boys, though controversy continued to surround him.

He was handed another 15-month suspension for using ephedrine at the 1994 World Cup.

And just months earlier, he fired an air rifle at reporters outside his Buenos Aires home, a crime for which he eventually received a suspended jail sentence.

He ended his 679-game professional career, which included 346 club and international goals, in 1997 after a second stint at his beloved Boca. Maradona’s gyrations continued well into his retirement from playing.

And, in many ways, the extreme highs and lows of perhaps Argentina’s most famous son embody the travails of the nation itself: A boom in the 1990s - after the return to democracy - imploded spectacularly at the turn of the century; Argentina then rode the wave of a commodities rally in the early 2000s but stumbled again as parties on either end of the political spectrum flip-flopped between interventionist and market-oriented policies.

Maradona himself was a political romantic. He tattooed an image of Che Guevara, the Argentine who co-led the Cuban Revolution, on his arm; vehemently supported Venezuela’s socialist government; and allied himself with leftist leaders in Argentina’s Peronist movement.

It was Fidel Castro, who was also tattooed on Maradona’s leg, who once stepped in to save him from cocaine addiction through several years of rehabilitation in Cuba.

Still, addiction was never far away. Maradona’s weight would balloon, causing heart and breathing issues, as he binged on food, drugs, alcohol and cigars.

In 2004, Maradona was placed on a respirator in intensive care in a Buenos Aires clinic.

And after reaching 121 kilograms (267 pounds) - his playing weight was 73 kilos - the following year he had his stomach stapled in Colombia.

In 2007, he was treated in hospital for alcohol abuse.

There were also some financial difficulties. Maradona battled with courts in Italy over an unpaid tax bill of 37 million euros (about R670 million) from his years at Napoli, with police seizing his jewellery when he travelled back there in the late 2000s. Despite his health and money battles, for a short time, Maradona hosted a TV chat show whose guests included Castro and Pele and later forged a career, albeit an indifferent one, as a coach.

With Maradona in charge, Argentina’s national team only just sneaked an automatic qualification spot for the 2010 World Cup.

The team was eliminated from the tournament proper in the quarterfinals by Maradona’s old rival, Germany.

Maradona would later have spells as a coach in the United Arab Emirates and Mexico before returning to Argentina with Gimnasia y Esgrima La Plata.

He took over in September 2019, but by then his history of health problems and addiction had taken a heavy toll.

His flaws and personal tragedies, though, never diluted his popularity. If anything, they strengthened it.

In 2000, as Fifa officials voted Pele the best-ever player, Maradona was the clear people’s choice, and the award was shared.

Tributes have come in the form of pop songs by the likes of French-Spanish musician Manu Chau and even a “Maradonian” church based in the Argentine city of Rosario.

Maradona is survived by daughters Dalma and Gianinna from his former wife, Claudia Villafane.

He has also recognized at least three children from other relationships. Maradona plays with his daughter Dalma after a training at the Centro Paradiso di Soccavo on October 22 1988 in Naples, Italy. Picture: Etsuo Hara/Getty Images
We live in a world where facts and fiction get blurred
In times of uncertainty you need journalism you can trust. For only R75 per month, you have access to a world of in-depth analyses, investigative journalism, top opinions and a range of features. Journalism strengthens democracy. Invest in the future today.
Subscribe to News24
Related Links
Number 10: The legacy of Maradona's iconic shirt number
Is Lionel Messi becoming Maradona?
Great players, poor coaches
Next on City Press
‘Proven record’ helped Kerr beat Nyirenda in the race for Swallows coaching job