The battle of the kits | Who has the most lit shirt between Pirates, Chiefs and Sundowns? The PSL’s prominent trio of Kaizer Chiefs, Orlando Pirates and Mamelodi Sundowns have unveiled their new looks for the upcoming season

The PSL’s prominent trio of Kaizer Chiefs, Orlando Pirates and Mamelodi Sundowns have unveiled their new looks for the upcoming season.

Pirates’ official launch on Tuesday ended the long wait for the club to showcase its latest offering and, as expected, has ignited a bragging contest with rival fans from Chiefs and Sundowns.

Chiefs, who are kitted by Nike, as well as the Puma-sponsored Sundowns also launched their kits this month.

In essence, the three powerhouses have put the sporting goods manufactures on the spotlight in a battle for the most lit kit.

Since Tuesday, immediately after the Pirates launch, the team’s striking orange away jersey has been trending on social media, with some comments as hilarious as the ones that likened the shirt to South African prison garb.

“The away kit, in particular, is sure to get fans talking, with its striking orange colourway. It’s the first time in the club’s history this colour is being used and it’s seen as an expression of confidence and vibrancy that reflects the team’s spirit,” explained Bob Maphosa, sports marketing manager for Adidas SA.

The most notable change in the new design is that the club’s traditional badge has been replaced with the skull and crossbones emblem.

The club’s logo is embroidered near the waistline as an authentication tag.

When Chiefs launched their new kits last week, they greeted their supporters with: “Allow the spirit of the lion to awaken in you with our new home jersey. Let us also walk into the future with our electric blue away jersey. Sundowns were the first to launch their kit when they dropped a “slim fit cut with a Johnny collar, reminiscent of 1970s style playing jerseys”. The kit commemorates the club’s 50th anniversary, and this message is relayed through the “50 Years” embroidered below the redesigned Sundowns emblem.

According to Puma, the new design symbolically links the jersey to the era in which the club was established. “It’s a momentous year for the club, and the 2020/21 jersey portrays a new direction in our history with the launch of the redesigned logo and the celebration of 50 years of evolution, aspiration and determination,” said Shakoane.

THE THINKING BEHIND THE NEW JERSEYS

“Our partners at Puma have created a timeless kit that salutes the teams of the past as we continue to forge a future. It pays homage to our humble beginnings in Mamelodi, while the bold Brazilian accents highlight our continued desire to play entertaining and revolutionary football.” – Alex Shakoane

The home jersey draws inspiration from Kaizer Chiefs’ founder and chairperson, Kaizer Motaung, incorporating a lion’s mane in the design to reflect the Bataung clan name.

The away jersey is a striking electric blue with gold trim around the neckline and sleeves to reflect the club’s prominence in African football. The collar of the jersey is also inspired by the lion’s mane that is found on the home jersey. – Chiefs marketing department

“Orlando Pirates are a club that stands for innovation and confidence, while staying true to its roots. We focused on bringing unique elements to each kit, such as the iconic skull and crossbones, and using orange for the first time in the club’s history. 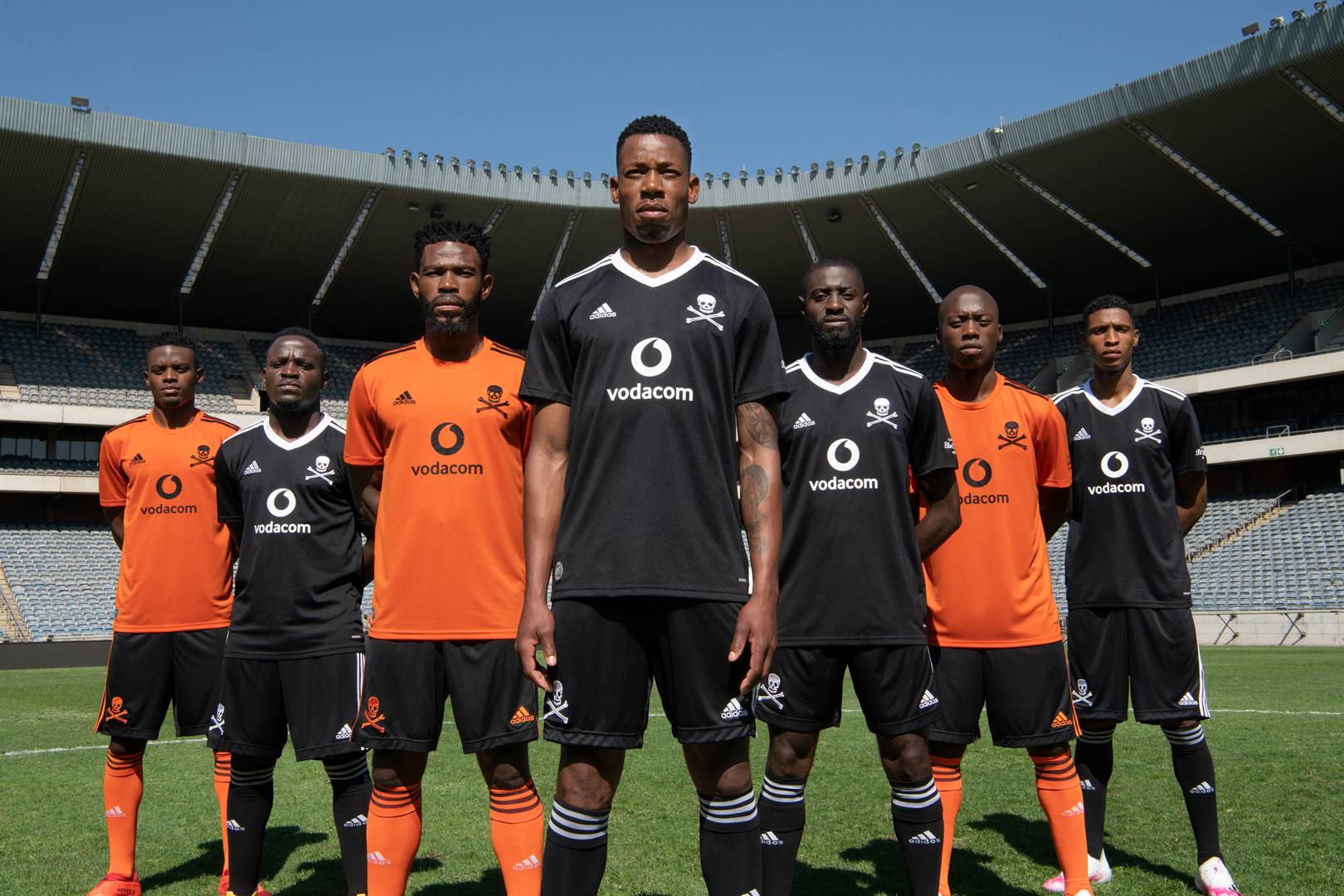 Orlando Pirates captain Happy Jele and his team-mates pose with the club’s new colours ahead of the 2020/21 season. Picture: Brandon Barnard

“The striking design of our new kit shows that we’re constantly progressing and growing as a club, while retaining our distinctive visual identity and logo. The result is a kit that keeps the traditions that are woven into our heritage and DNA, while signalling a fresh era for South Africa’s most loved team.” – Pirates media officer Thandi Merafe.

Which kit do you think is top-class?

We live in a world where facts and fiction get blurred
In times of uncertainty you need journalism you can trust. For only R75 per month, you have access to a world of in-depth analyses, investigative journalism, top opinions and a range of features. Journalism strengthens democracy. Invest in the future today.
Subscribe to News24
Related Links
Kaizer Motaung looking forward to a ‘bright future’ as Arthur Zwane, Dillon Sheppard appointed as...
Hlatshwayo shares bits of his face-to-face talk with Bucs boss Khoza
Langerman saga: Celtic lose case but Sundowns are not out of the coals yet
Next on City Press
SA Under-23s get early return ticket from Olympics