There’s no better football league in the world than LaLiga 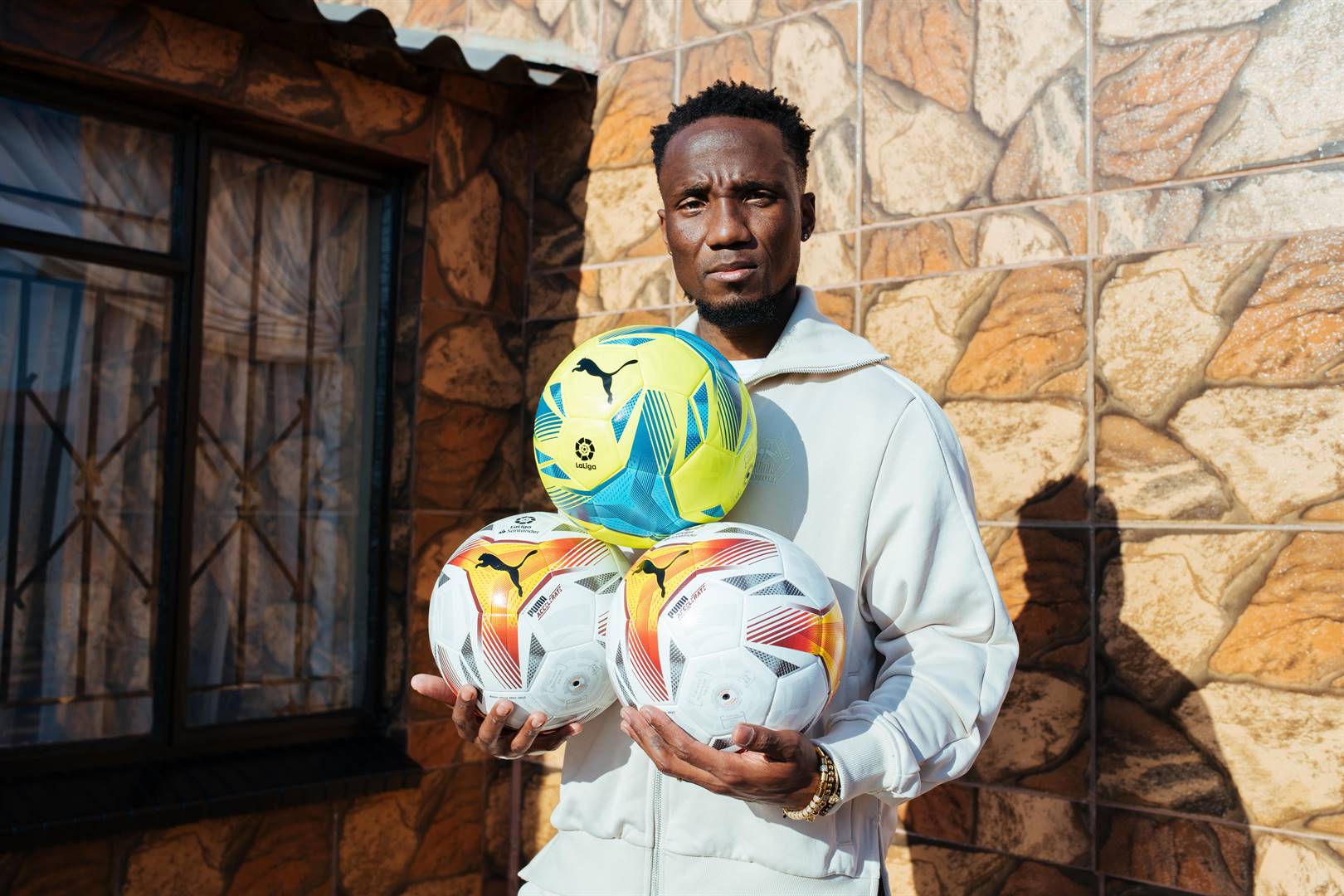 Teko Modise showcasing the Puma Accelerate and Adrenaline match balls that will be used for the 2021/2022 LaLiga season. Photo: Kasi Flavour10

One of South African football’s greatest thinkers on the pitch, Teko Modise, believes that, for the fan who loves carpet football, technical ability and intelligence, there is no better league in the world than Spain’s LaLiga.

Modise, a former Bafana Bafana creative midfielder who played for Orlando Pirates, Mamelodi Sundowns, SuperSport United and Cape Town City, was nominated to profile the LaLiga Puma Accelerate and Adrenaline match balls that will be used in Spain during the 2021/22 season.

The 38-year-old shared his thoughts on the quality of LaLiga and Spanish football on the sidelines of a special photo shoot with the Kasi Flavour agency in his hood of Meadowlands, Soweto, this week.

What are your earliest memories of Spanish football and LaLiga?

It would probably be the El Clásico. The first time I watched Spanish football and really paid attention to it was during the era when Zinedine Zidane, Luís Figo, David Beckham and Ronaldo [of Brazil] were playing for Real Madrid.

I think, at the time, it was the strongest side in the world.

What sets Spanish football and LaLiga apart from other leagues in the world?

With Spanish football, the emphasis is on the football culture, meaning that the plan is to be highly technical, tactically gifted and respectful on the side of the player to play the football on the ground.

Also, the ability to attract such players who don’t necessarily need height. They don’t need to be superstrong on the pitch or have speed, but they are very smart, thinking players.

READ: I’m at Madrid to be David Alaba, not Ramos’ replacement

We saw the quality of talented players who were interested in going to Spain [from other countries] and how playing in that league was regarded as playing in one of the best leagues in the world.

Also, they have arguably the greatest teams in the world – Barcelona and Real Madrid. Madrid’s culture has been to buy both superstars and inexpensive players from all over the world and form one of the strongest teams to always challenge for the Spanish league title and the Uefa Champions League.

Barcelona, too, are famous for bringing superstars and also moulding young kids from their development structure into the first team, to become real superstars.

We were fortunate to witness superstars such as Ronaldo on one side and Lionel Messi on the other for 10 to 15 years.

Who were your heroes while growing up and are there any particular players you modelled your own game on?

I think of David Silva – being able to play in half spaces, being comfortable with the ball even though there are so many players around him and knowing exactly what to do with the ball before it comes to him.

Sergio Busquets [also comes to mind for] being able to control the tempo of the game, knowing when to make a foul when the opposing team are in a good position and being able to pinpoint those crucial times.

I think these are some of the main attributes they have in their game and also something I try to take bits and pieces from.

I’ll add David Villa, mainly because of how he finishes. He is a guy who doesn’t use power, but accuracy and finesse.

Sometimes, especially in Africa, we lack the finesse because we always want to rush things. Spanish football always comes with innovative stuff to improve the game.

READ: Neptune smiles as El Cholo and his seahorses take the throne

Cesc Fàbregas played and mastered position No 6 when he was controlling and dominating the midfield at Arsenal, Barcelona and Chelsea.

Those are the types of players who, as a creative midfielder... you want to take all that creativity.

The movements and the passes, the vision ... you want to combine and try and make it one.

I think what made the team so special was the understanding among the players. It also helped that at the time of the dominance in Spanish football, there was Barcelona, whose philosophy was the tiki-taka style of keeping the ball on the ground.

But I think, irrespective of who was playing for whichever LaLiga club, Spain just clicked and that philosophy worked very well for them. And it was very beautiful to watch.

In my lifetime, I haven’t seen any national team playing at that standard with such pride, possession and arrogance on the ball.

How was your experience of playing against Spain in the 2009 Fifa Confederation Cup?

It was the most educational game of my life, when you find yourself not only admiring the opponent but also studying the game.

It is something else to watch them on TV and analyse them, but totally different playing against them on the pitch.

For me it was very educational, because they had Andrés Iniesta, Busquets, Xavi, Xabi Alonso, Silva – players who know how to play simple football, but are so skilful and are able to control the tempo.

So to face such superstars and technically talented players was very, very frustrating. But you could also see these were things they didn’t learn right away, but were instilled into them as kids playing in a development side and growing up with those fundamentals of the game.

Sundowns hosted Barcelona in South Africa twice. How much excitement did those visits bring to local football fans?

It was exciting that a team of such magnitude could come to South Africa to play a friendly game.

Normally, those teams go to Asia or to other countries, but seeing Barcelona here and playing the way they played, without taking a South African team for granted, was very exciting.

The first time was when Ronaldinho was the superstar of world football and everybody wanted to watch him. The second time they came with Messi, who is another superstar.

You could see how Sundowns played in both games – not shy, but very confident. And that’s how Sundowns have been since.

What do you make of the new generation of Spanish stars with strong African roots such as Ansu Fati and Ilaix Moriba?

It is exciting to see the new generation of Spanish stars. These are superstars who are still young, but are being given opportunities to play for big teams in Spain, especially Fati.

We all know with Africans ... we are everywhere and when given opportunities, whether in the country of their birth or adopted countries, you need to embrace it and take it with both hands. I think it’s probably the new era of mixed football cultures that will be accepted. It is also very challenging, because you are not only expected to prove yourself on the pitch, but also off it, given the situation with racism, which is still rife.

It is so annoying in football, but these are the types of players who can hopefully educate and change the mind-set of what has been happening with racism in football. – A LaLiga special feature in collaboration with Kasi Flavour

We live in a world where facts and fiction get blurred
In times of uncertainty you need journalism you can trust. For only R75 per month, you have access to a world of in-depth analyses, investigative journalism, top opinions and a range of features. Journalism strengthens democracy. Invest in the future today.
Subscribe to News24
Next on City Press
Dodging lorries, lava and war, DRC’s skaters feel reborn