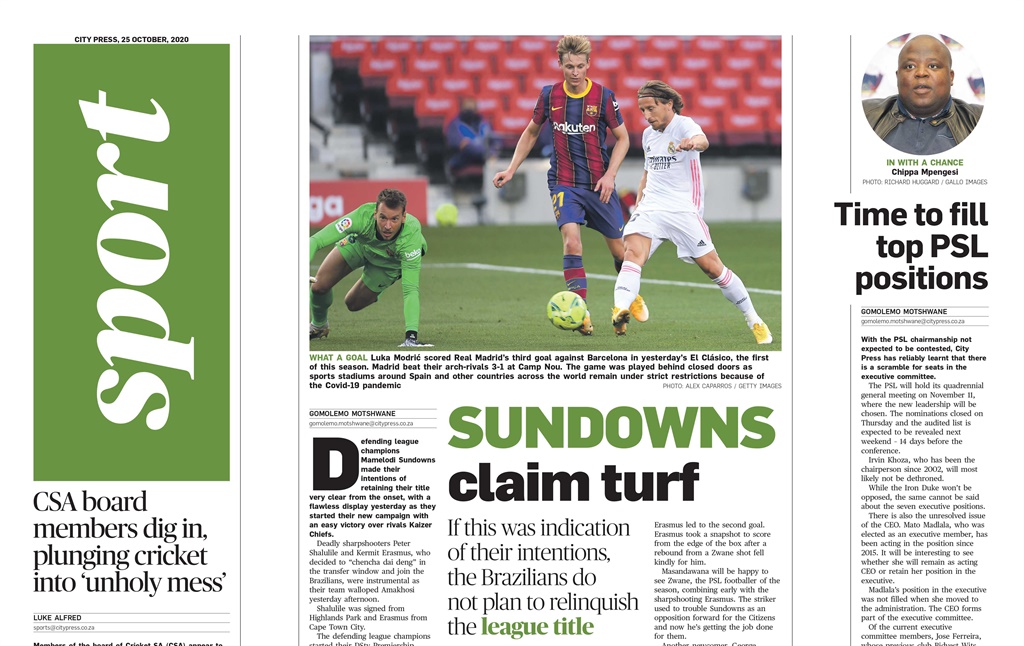 With the PSL chairmanship not expected to be contested, City Press has reliably learnt that there is a scramble for seats in the executive committee.

Defending league champions Mamelodi Sundowns made their intentions of retaining their title very clear from the onset, with a flawless display on Saturday as they started their new campaign with an easy victory over rivals Kaizer Chiefs.

Mosimane dazzles from Chloorkop to Cairo

Themba Zwane is the PSL’s footballer of the season, reaffirming what followers of the beautiful game have known for some time. The 31-year-old skilful wizard was the biggest winner at the PSL Awards on Thursday night. This after scoring a hat-trick of individual accolades for helping Mamelodi Sundowns to glory.

Simnikiwe Xabanisa says listening to Rugby Australia chair Hamish McLennan say he and his organisation “were perplexed” that Sanzaar counterparts SA Rugby had withdrawn the world champion Springboks from defending the Rugby Championship this year reminded him of a long-ago incident in Durban.

Mokoka’s new record is due to the lockdown

Stephen Mokoka’s improvement of the national half marathon record at the world championships in Poland last weekend came as a surprise for most observers in a year disrupted by Covid-19, but it didn’t exactly come out of left field for the athlete himself.

TTM over their glitches and ready for Galaxy

A clash of big-spending newcomers is on the cards at the Thohoyandou Stadium this afternoon, when Tshakhuma Tsha Madzivhandila (TTM) take on TS Galaxy.

Usuthu boss has a grand plan

The days of glory are back again. Let’s walk this exciting journey together. This is the promise AmaZulu’s new owner Sandile Zungu has made to Usuthu’s supporters. The head of Zungu Investment Company, a holding company with business operations in mining, energy, manufacturing and gaming, bought the club from Patrick Sokhela earlier this month.

TTM must get its act together – quickly

Tshakhuma Tsha Madzivhandila’s lack of professionalism and amateurish behaviour has damaged to the PSL’s reputation. One game into the new season, and TTM are the laughing stock of football fans, writes Timothy Molobi.

The VAR is an assistant

I think that if the video assistant referee (VAR) was a human being, it would have committed suicide by now, or at least been in an asylum for the mentally ill, writes Errol Sweeney.

Members of the board of Cricket SA (CSA) appear to be getting ready for a fight after the members’ council passed a resolution on Thursday for the board to step down.

We live in a world where facts and fiction get blurred
In times of uncertainty you need journalism you can trust. For only R75 per month, you have access to a world of in-depth analyses, investigative journalism, top opinions and a range of features. Journalism strengthens democracy. Invest in the future today.
Subscribe to News24
Related Links
R1.4 million up for grabs at PSL Awards
'Calm' Cavin says he's the man to put out fires for Pitso
Sundowns’ many new faces, but how are they going to fit in?
Next on City Press
Marumo still in a shambles