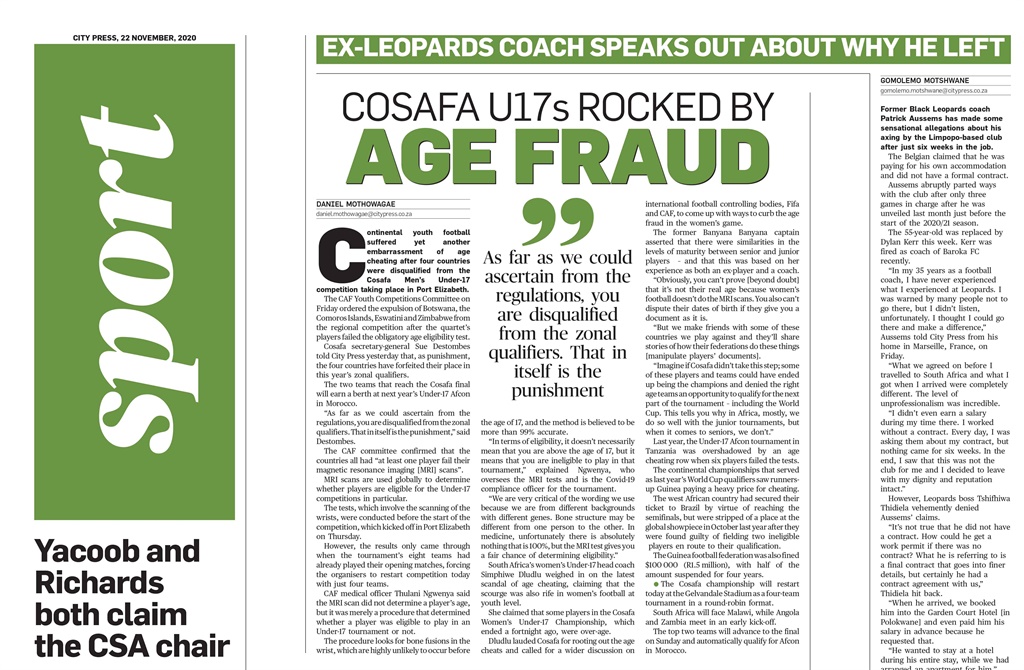 Here is what you can expect in today’s Sports section:

Tim Spirit | Play ball instead of me, Safa

Safa has again resorted to name calling and character assassination in its reaction to the opinion I penned in this column last Sunday.

This week, Safa published a lengthy statement on its website, seeking to portray me in a bad light after I cautioned CAF presidential hopeful Patrice Motsepe about parasites waiting to squeeze his millions in the name of delivering votes for his candidacy, writes Timothy Molobi.

In fact, the VAR was to be the best thing since sliced bread and the answer to all queries, questions and discussions, writes Errol Sweeney.

Not long ago, we made fun of Australian utility back Matt Toomua for claiming the Wallabies could build on the momentum of the Brumbies’ win of the Super Rugby AU title.

The reason for the derision was, because the Covid-19 outbreak meant this year’s Super Rugby ended up as domestic competitions in New Zealand, Australia and South Africa, Toomua’s suggestion wasn’t too far a leap from saying the Cheetahs’ win of last year’s Currie Cup filtered confidence through to the Springboks, writes Simnikiwe Xabanisa.

Cosafa U17 tournament in PE rocked by age cheating

Continental youth football suffered yet another embarrassment of age cheating after four countries were disqualified from the Cosafa Men’s Under-17 competition that is under way in Port Elizabeth.

The CAF Youth Competitions Committee on Friday ordered the expulsion of Botswana, the Comoros Islands, Eswatini and Zimbabwe from the regional competition after the quartet’s players failed the obligatory age eligibility test. CAF medical officer Thulani Ngwenya and Cosafa secretary-general Sue Destombes speak to City Press about how the four countries were caught, as well as the punishment meted out.

Four years later, Mosimane may just augment that record by adding a second continental championship to his tally. Now Al Ahly head coach, Mosimane will be hoping that history repeats itself against Zamalek in the final of this year’s Champions League on Friday, which takes place at the same stadium where Sundowns lifted the continental club football trophy.

The Serb is demanding more than R6 million from the Limpopo club after he was unceremoniously dumped while they were still campaigning in the NFD last season, shows correspondence between Heric and Fifa that City Press has seen.

Former Black Leopards coach Patrick Aussems has made some sensational allegations about his axing by the Limpopo-based club after just six weeks in the job.

The Belgian claimed that, among other things, he was paying for his own accommodation and did not have a formal contract. Leopards boss Tshifhiwa Thidiela gives the club’s side of the story.

It is interesting that all of Sunday’s three DStv Premiership matches will feature coaches who have recently been elevated from their roles as assistants – and one of them is Baroka FC’s Matsemela Thoka.

“You can say Baroka picked me up from the dusty grounds of Maralaleng village,” said the 47-year-old of his humble beginnings.

PSL coach Dylan Kerr will leave you with raised eyebrows just from looking at the tattoos that fight for space on his legs. But why would his body art include a prominent tattoo of a Baroka FC emblem, the same club that fired him a week ago?

Safa has dedicated next Friday to celebrating local women’s football and has planned an event at Safa House in Johannesburg for that purpose.

This comes amid fresh calls for female players to receive the same pay as their male counterparts after Banyana Banyana’s historic triumph in the Cosafa Women’s Championship last weekend.

The Proteas will be on the back foot when their upcoming T20 and ODI series against England begins, but they are a good enough team to still expect to win against the world champions.

This is the view of former Proteas coach and current Chennai Super Kings bowling coach Eric Simons, who was ringside to some of the players from the two sides going hammer and tongs at one another in the recently concluded Indian Premier League.

Yacoob and Richards both claim the Cricket SA chair

A furious arm-wrestle has broken out between former Constitutional Court Judge Zak Yacoob, former chairperson of the board of Cricket SA (CSA) and Rihan Richards, its acting president.

Both believe they have the mandate to represent CSA at the International Cricket Council and, despite two weeks of discussions, the matter remains unresolved.

Just six months after warding off the Sharks’ and the Stormers’ interest in Wandisile Simelane, the Lions are gearing up for another fight to retain the outside centre’s services, this time against French side Toulouse. City Press understands that the Lions received an email this week requesting permission for the Top 14 club to speak to the former South African Under-20 star, a request that’s come just as Simelane has hit white-hot form.

Hamilton’s dominance over the past three years continued into this strange season, in which the Covid-19 coronavirus pandemic caused havoc to sport throughout the world and it seems unlikely that he will ease his foot off the pedal in the three remaining races – starting today in Bahrain.

We live in a world where facts and fiction get blurred
In times of uncertainty you need journalism you can trust. For only R75 per month, you have access to a world of in-depth analyses, investigative journalism, top opinions and a range of features. Journalism strengthens democracy. Invest in the future today.
Subscribe to News24
Related Links
Age-cheating puts a damper on Cosafa U-17 competition
Castro breaks duck for Chiefs strikers in a four-goal thriller against Arrows
Next on City Press
Tim Spirit | So far so good, but Broos must be more tactful