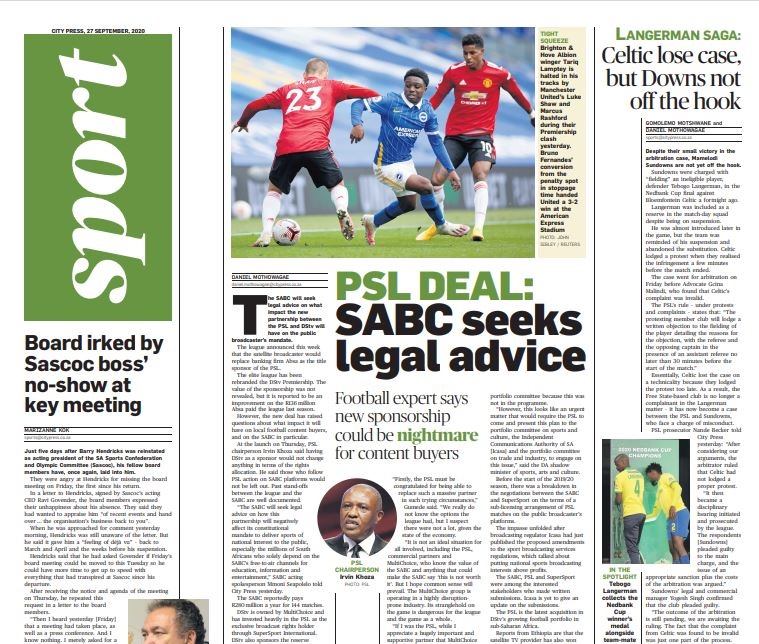 The SABC will consult with its lawyers about what impact the new partnership between the PSL and DStv will have on the public broadcaster’s mandate. This after the league announced this week that the satellite broadcaster would replace banking firm Absa as the title sponsor of the PSL.

“I’ve always wanted to work in South Africa and I’m excited about starting my work. The PSL is the best league in Africa in terms of organisation, media coverage and infrastructure,” Black Leopards’ new coach, a Belgian who lives in France, tells City Press. The 55-year-old is set to arrive in the country next week to begin his job after he signed a three-year contract with the Venda, Limpopo-based outfit.

Langerman saga: Celtic lose case, but Downs not off the hook

Despite their small victory in the arbitration case against Bloemfontein Celtic, Mamelodi Sundowns are not yet off the hook for including a suspended player on its match-day list.

It is never too late to realise your dreams, and this clearly applies to the road travelled by Thulani “Tyson” Hlatshwayo, who, at the age of 30, is only now realising his childhood dream of playing for Orlando Pirates. But many might not have known that the Bucs were in fact destined to be his home as far back as 14 years ago.

‘Brazilians are starting to know Sundowns’

Being the most successful South American player at a club that finds much of its influence in the South Americas fills Mamelodi Sundowns defender Ricardo Nascimento with pride.

The Brazilian has won six trophies since joining the club in 2016. “A few mates of mine have asked me about Sundowns and have shown an interest in playing here,” he says.

When the football history of the early 21st century is written and finally settled on, barring any omissions by the victors, Sevilla FC will go down as one of the most successful clubs in this era. The club’s sporting director Ramón Rodríguez Verdejo shares the secrets of Sevilla’s business in an exclusive interview with City Press.

When Borussia Dortmund announced on Thursday that they had signed 16-year-old Jamie Bynoe-Gittens from Manchester City, the attacking midfielder became the latest starlet to leave England for the Bundesliga. Jadon Sancho, Jude Bellingham, Ademola Lookman, Reece Oxford, Tahith Chong and Jamal Musiala have all already experienced their first taste of the Bundesliga.

Tannie and Wayde are happy Olympics were postponed

With her 79th birthday around the corner, world 400m record holder Wayde van Niekerk’s coach “Tannie” Ans Botha continues to break down stereotypes and has been named as the face of Discovery’s Vitality 65+ programme, which is tailored specifically for the needs of the elderly. She tells City Press the secret to being at the cutting-edge of athletics at her age, and reports back on her protégé’s interrupted season.

Siyoli on a mission to promote squash in South Africa

Squash star Siyoli Waters’ best playing days may be behind her, but the former squash professional’s passion for the game continues to burn strongly as she gives back to the youngsters in her community.

The 37-year-old is involved in Ekapa Squash, a development programme in Cape Town through which she hopes to pass the knowledge she gained on her squash journey to aspiring players.

Board irked by Sascoc boss’ no-show at key meeting

Just five days after Barry Hendricks was reinstated as acting president of the SA Sports Confederation and Olympic Committee (Sascoc), his fellow board members have, once again, laid into him.

They are angry because Hendricks missed a board meeting on Friday, the first since his return.

The 12th Man: Bravo for locals, but these can’t just be token appointments

This week saw a new generation of coaches break on to the country’s football scene. Days after Arthur Zwane and Dillon Sheppard were installed as Gavin Hunt’s lieutenants at Kaizer Chiefs, Maritzburg United followed suit with the appointment of Delron Buckley and Rowen Fernández as part of Eric Tinkler’s technical staff. It was also heart-warming to see the return of former Bafana Bafana captain Lucas Radebe to Safa as part of its technical committee. For a long time, former players who aspired to be coaches have been shunned by most local clubs, especially in the elite league, while influential and prominent figures like Radebe were often overlooked for key roles because they were viewed as threats.

In 2008, Uefa launched a programme aimed at “social responsibility” in the game of football. It had four main strands: fighting against racism, increasing and improving access for fans with disabilities, promoting health through physical activity and improving intercultural dialogue among fans. The ambassadors for the campaign were former Italian World Cup referee Pierluigi Collina and former Netherlands international player Clarence Seedorf. Included in the mix was respect for match officials, which, in my opinion, has fallen way short of the campaign’s original objectives.

One only has to watch the games today at any level to see that there isn’t much respect from players for each other, or for the referees and their assistants.

Side Entry: South African rugby and the get out of jail free card of voluntary liquidation

On Saturday, an email bearing the news that the Southern Kings had decided to go into voluntary liquidation slid into my inbox. As one of many emails being churned out by the SA Rugby communications machine that day, there was an everyday feel to the missive. Except that it was also effectively announcing that 58 Kings people – 36 players and 22 staff members – had lost their jobs less than a week before payday. These voluntary liquidations happen so often in South African rugby that we have begun to accept them as some sort of victimless crime.

We live in a world where facts and fiction get blurred
In times of uncertainty you need journalism you can trust. For only R75 per month, you have access to a world of in-depth analyses, investigative journalism, top opinions and a range of features. Journalism strengthens democracy. Invest in the future today.
Subscribe to News24
Next on City Press
Tyson hoping for a fresh start in Pirates’ new look