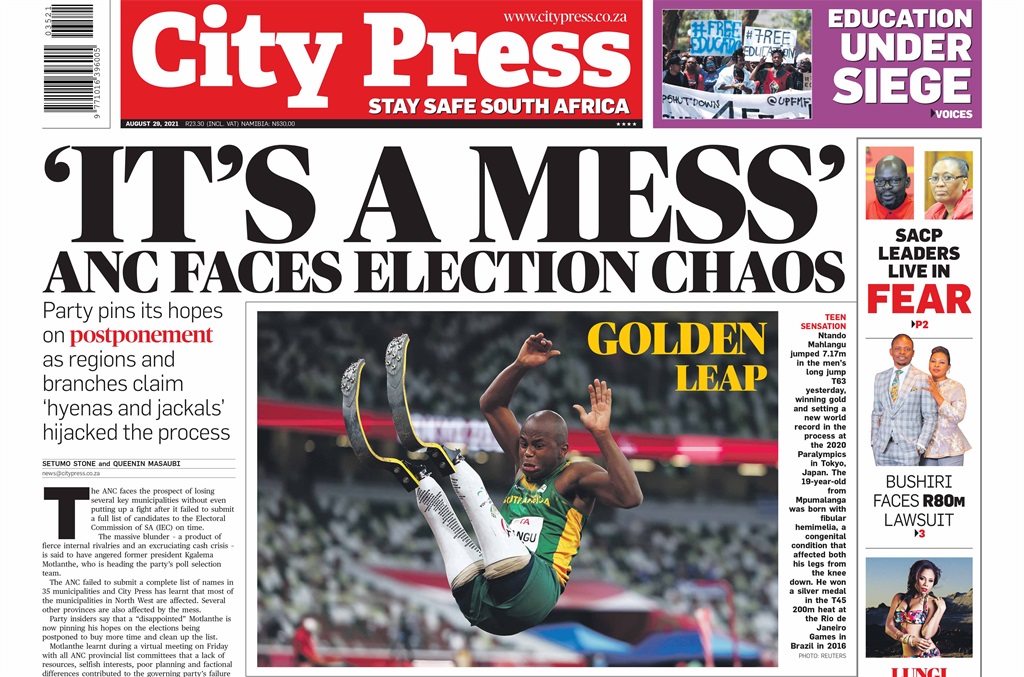 The ANC faces the prospect of losing several key municipalities without even putting up a fight after it failed to submit a full list of candidates to the Electoral Commission of SA on time.

The massive blunder – a product of fierce internal rivalries and an excruciating cash crisis – is said to have angered former president Kgalema Motlanthe, who is heading up the party’s poll selection team.

A software developer this week lodged an ex parte application in the Johannesburg High Court against the self-proclaimed prophet Shepherd Bushiri, claiming that the fugitive pastor failed to pay him after he was recruited to create an online platform for the Enlightened Christian Gathering Church TV channel.

The SA Communist Party (SACP) believes it is being targeted following a series of attacks at the homes of its most senior leaders. The security detail of senior SACP leaders and staff has been tightened after gangs of armed men wearing balaclavas invaded the private residences of the party’s top brass around the country.

AKA’s show goes on, but his battle is far from over

Renowned rapper AKA, whose real name is Kiernan Forbes, may have given the airing of the second season of The Braai Show the green light, but his fight with the producers continues. Forbes last week applied for an urgent interdict at the Johannesburg High Court to halt the SABC, in conjunction with production companies Makhuducom Media and Cake Media, from airing the show’s second season.

Department pays – despite no goods received

Gauteng Sports, Arts, Culture and Recreation MEC Mbali Hlophe has been accused of turning a blind eye to corruption playing out under her nose. Her department allegedly flouted tender processes in the procurement of mobile library trolleys last year – she was informed of the irregularity, but failed to act on it.

The Hawks had aimed to nail Nthimotse Mokhesi, the chief suspect in the Free State asbestos looting case, before the office of the Public Protector concluded its own investigation, but they were frustrated by the National Prosecuting Authority (NPA) as it turned out that the allocated state prosecutor was conflicted in the case.

ANC officials to fight it out court

Being called devil worshippers, overlooked for promotions, instructed to buy gendered underwear and clothes, and asked how they have sex – these are some of the testimonies queer teachers shared at an LGBTIQ+ workshop hosted by the SA Democratic Teachers Union in Durban last weekend so that they could share their experiences in the workplace and come up with solutions on how the problems could be addressed.

Ekurhuleni mayoral candidate Refiloe Ntsekhe is reluctant to form coalition governments as they have previously proven to be onerous, and has instead set her sights on snatching the most wards in the East Rand.

At first glance, Khuma near Stilfontein in North West looks like an ordinary South African township, but on Thursday, members of the community gathered to urge the police to take action after the body of a young woman, believed to have been raped and killed, was discovered in the area last week. Crimes like this, said community members, were happening more often, as were robberies.

Dealing with long Covid: ‘I’m lucky to be alive’

Musician Lungi Naidoo says she is lucky to be alive after being admitted to hospital with Covid-19. Three months later, she is still struggling with the long-term effects of the virus on her system, including a severe skin rash, exhaustion and bronchitis.

It takes Kwanele Sidwana* one hour and 48 minutes to admit that he is unemployed. The 31-year-old tells City Press: “The moment I admit I’m unemployed is the moment I believe I’m incapable.” Sidwana obtained his bachelor of technology degree in language practice from the Durban University of Technology in 2013. He then completed a six-month course with the National Youth Development Agency, where he was trained in the fundamentals of business.

We live in a world where facts and fiction get blurred
In times of uncertainty you need journalism you can trust. For only R75 per month, you have access to a world of in-depth analyses, investigative journalism, top opinions and a range of features. Journalism strengthens democracy. Invest in the future today.
Subscribe to News24
Next on City Press
Tired of voting and frustrated with the ANC, Zandspruit residents deserve better