Shaka Rising: A legend of the Warrior Prince by Luke W Molver and Mason O'Connor

Shaka Rising: A Legend of the Warrior Prince by Luke W Molver and Mason O’Connor

Shaka is the ideal subject for a graphic novel: Hard facts about his life are sparse and there is no reliable portrait. He is largely a mythical figure concocted out of oral tradition, the self-serving written accounts of contemporary white riff-raff calling themselves hunter-traders and the work of later charlatans passing off fiction as history. The creators of this novel acknowledge the work of academic Dan Wylie, who wrote of Shaka: “We know next to nothing.”

This publication, aimed at children, deals with Shaka as boy and young man and ends with his defeat of Zwide kaLanga’s marauding Ndwandwe near the Mhlathuze River.

The writers portray Shaka as a potential military strategist and diplomat; and more controversially as a future liberator, man of destiny and people’s leader. A glaring point of historical licence has Shaka killing his half-brother Sigujana in a dramatic showdown – reputable sources have him arranging for others to do the deed.

There is a speculative romantic element.

The strength of this book lies in the appended notes that examine the historical setting; the concepts of leader and ruler; and the roles of women, social structure, culture, belief and language among the Zulu people. These are followed by a set of thought-provoking questions about the novel. Education follows entertainment.

A downside of graphic histories is that visual images are direct and very powerful, lacking the nuance of text. They inevitably tempt modern interpretation: Characters in this book look as if they go to gym. The choice of dark colours and many flashes of lightning is presumably intended to imply the perilous nature of Shaka’s times. But the speech bubbles have a cluttered feel, highlighting some words in bold and using an awkward font. US rather than South African spelling is another drawback. That said, any medium that might promote reading comprehension and history is a positive thing. - Christopher Merrett.

Merrett is a former academic librarian, university administrator and journalist 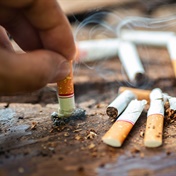