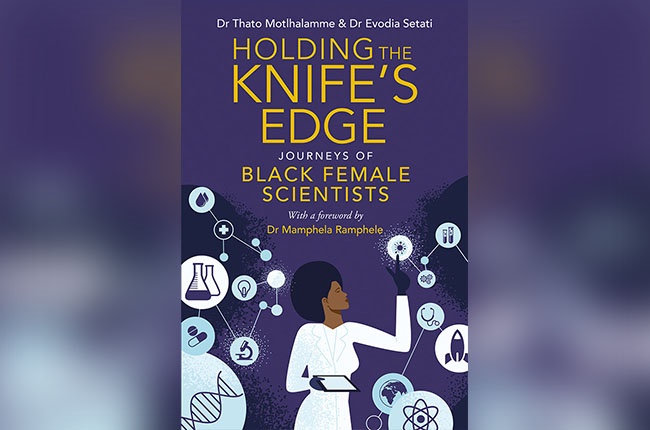 It stemmed from genuine concern. Why was there an apparent lack in visibility of black women in science in the country? And not only that, but why was it even harder to access those who were there, as role models for early career scientists to get mentoring from?

These questions plagued Dr Thato Motlhalamme, who holds a degree in complimentary medicine and a Masters degree in medical biosciences from the University of Western Cape.

And then she teamed up with Dr Evodia Setati, the chief researcher at Stellenbosch University, to get to the bottom of.

But instead of just answering the questions – the two women came up with a more lasting antidote – authoring the book Holding The Knife’s Edge, Journeys of Black Female Scientists, which has just been launched.

Setati herself, who obtained her BSc Honours degree at the University of Limpopo and a PhD in microbiology at Stellenbosch University, said she knew all too well the lonesome journey of getting into the sciences as a black woman.

“It wasn’t so much that there were so few of us who were successful women in the science, technology, engineering and maths (STEM) space, but of concern was the visibility and ease of access to some of these women which wasn’t exactly easy. This is because when you try to reach out to other women in science, you don’t necessarily know who is in which institution and which research areas they are involved in,” Motlhalamme told City Press.

The book profiles the individual stories – from their childhoods, education, hunger for knowledge and the shared tenacity to succeed and make an impact in their various fields.

“The common thread I observed from the stories of the women scientists is really their shared tenacity and the realisation that we have to work 10 times harder to get half the recognition we deserve.

“These women have done so with such grace and poise – even when it’s somewhat sometimes easier to throw toys out of your cot and have tantrums [over work/career injustices]. But they stood up to the face of power in such a way that it not only opened doors for them but made sure that those who followed didn’t have to break down the same roadblocks,” Motlhalamme said.

THE WEIGHT OF BEING FIRST

Setati herself, who obtained her BSc Honours degree at the University of Limpopo and a PhD in microbiology at Stellenbosch University, said she knew all too well the lonesome journey of getting into the sciences as a black woman.

Coming from an education-driven family – her paternal grandparents had nine children, six of whom were teachers and a maths boffin uncle who taught her at high school – hard work was instilled in her at a young age.

“Moving to Stellenbosch was more about being at the right place at the right time. Our external examiner at the University of the North [University of Limpopo] came up to me after our oral examination and asked me if I didn’t want to go to Stellenbosch to pursue my Masters. This was at the end of 1995, just a year into our democracy so you can imagine …” she said, her voice trailing off with laughter.

“I think it was my bravery that just said, ‘Oh well, why not?’ And when people asked me why I wanted to go there, I would tell them, ‘It’s a public institution and I can study anywhere.’ So I ended up there for my Masters and PhD.”

When she started at the university in January 1996, she was the only black person and only woman in the lab.

“It was quite tough … But I told myself that I had to represent black people very well, which meant there was no room for mediocrity. You have to show that black people are just as excellent and can perform at this level in science as white people.

“That’s the attitude I had [while working on my Masters and PhD degrees]. I worked myself to the bone so that no one had room to say, ‘Oh, what can you expect from black people’.”

In 2018, she was the recipient of the Distinguished Woman Scientist (Engineering and Natural Sciences) Award from the department of science and innovation.

Motlhalamme said they were very intentional about how they wrote the book – free of the frills and industry jargon relatable for the young high school pupils and the burgeoning academic alike.

Added to her CV, Motlhalamme also holds a PhD in wine biotechnology from the Stellenbosch University and is currently a postdoctoral fellow.

“We wanted this to be a family book. We wanted it to be read and understood by a high school pupil, or be read and inspiring for a parent. For many out there, they are still first-generation children to go to university, so sometimes their moms and dads don’t always understand what you’re going through as a university student but want to be supportive.”

When she started at the university in January 1996, she was the only black person and only woman in the lab.

“So we wanted to also make it a useful resource for them [parents] and so that they see what that journey will look like for their children going into the sciences.”

She added: “We also wanted to reach the young researcher who is questioning themselves over, ‘Do I stay in academia?’, ‘What other opportunities are out there for me?’”

So it’s stories of different people being showcased, on how they’ve done it, the stumbling blocks they’ve faced and how they overcame.”

The book is available on Amazon for R250.

We live in a world where facts and fiction get blurred
In times of uncertainty you need journalism you can trust. For only R75 per month, you have access to a world of in-depth analyses, investigative journalism, top opinions and a range of features. Journalism strengthens democracy. Invest in the future today.
Subscribe to News24
Related Links
This project is exposing black girls to science
We must debunk the myth that black people cannot farm
A personal journey sheds light on why there are so few black women in science
Next on City Press
Book Extract | Safety through our relations