A celebration of Nigeria's hair culture

The Investec Cape Town Art Fair is around the corner and it promises to bring to light more unknown artists than ever before. With curator Tumelo Mosaka’s Tomorrows/Today exhibition specifically focused on exposing new talent, it will be an interesting space to see what the continent has to offer. Grethe Kemp looks at one of these artist’s work, Lagos-based photographer Medina Dugger.

This year’s edition of the annual Investec Cape Town Art Fair is gearing up to take place at the Cape Town International Convention Centre from February 15 to 17. Tumelo Mosaka has been the fair’s curator since 2017 and this edition will see the return of the Tomorrows/Today exhibition, intended to bring to light a number of rising artists from the continent.

Described as “a cross-section of the most exciting, emerging and less known artists from Africa and around the world”, Mosaka says: “The art scene is not short of rising stars. The point is how to provide visibility.” Mosaka has extensive knowledge of the international art scene, and worked independently for a decade in New York, curating works pertaining to migration, identity and racial injustice. His illustrious career in the US includes positions as associate curator of exhibitions at the Brooklyn Museum and contemporary art curator at the Krannert Art Museum in Champaign, Illinois.

On this year’s fair, he says: “I am particularly interested in artists who have a particular point of view that is both political and aesthetically evolving. This exhibition does not try to present a coherent theme, but rather aims to showcase a range of works contending with complexities arising from past legacies and present realities.”

Among the 10 artists selected by Mosaka will be Medina Dugger, a photographer from California, based in Nigeria since 2011. Her background includes studying at the Spe´os Photographic Institute in Paris, France, as well as working as a project coordinator/co-curator for the African Artists’ Foundation and LagosPhoto Festival. She has now turned her full attention to photography and is described as “focusing on themes of identity, tradition, modernity, gender and style”.

Her work includes photos and collages that document the hair culture in Nigeria as homage to JD Okhai Ojeikere, a renowned African photographer who documented women’s hairstyles in Nigeria for more than 50 years. Ojeikere photographed more than 1 000 hairstyles in his lifetime, and his black and white images were seminal in creating visibility of African women in a time when they were very much on the fringes in terms of representation in the art world. Throughout the ages, hair has been imbued with its own sociopolitical connotations. It has in turn been a representation of culture and a symbol of beauty. For many women, getting their hair to fit the societal norms of what “beautiful” hair is has been a never-ending, laborious journey that is both physically and emotionally painful. But hair has also been used to oppress. In South Africa, the “pencil test” was used during the apartheid era to categorise people into different racial groups – the test involved sliding a pencil or pen into the hair of a person whose racial group was uncertain. If the pencil fell to the floor, the person “passed” and was considered white. If it stuck, the person’s hair was considered too kinky to be white and the person was classified as coloured.

Dugger’s colourful ongoing photography series Chroma is not only a tribute, but a celebration. Unlike Ojeikere’s images, hers abound with colour. Beautifully lit and composed, each image of intricately woven hairstyles and larger-than-life headdresses bursts with movement. Also on display will be images from Dugger’s series Enshroud, which looks at Muslim women in Lagos and the traditional veil. Using digital collage, Dugger describes the collection as “featuring the veil primarily in an abstract sense; observing its forms, patterns, colours and its contribution to identity, self-expression and style”. 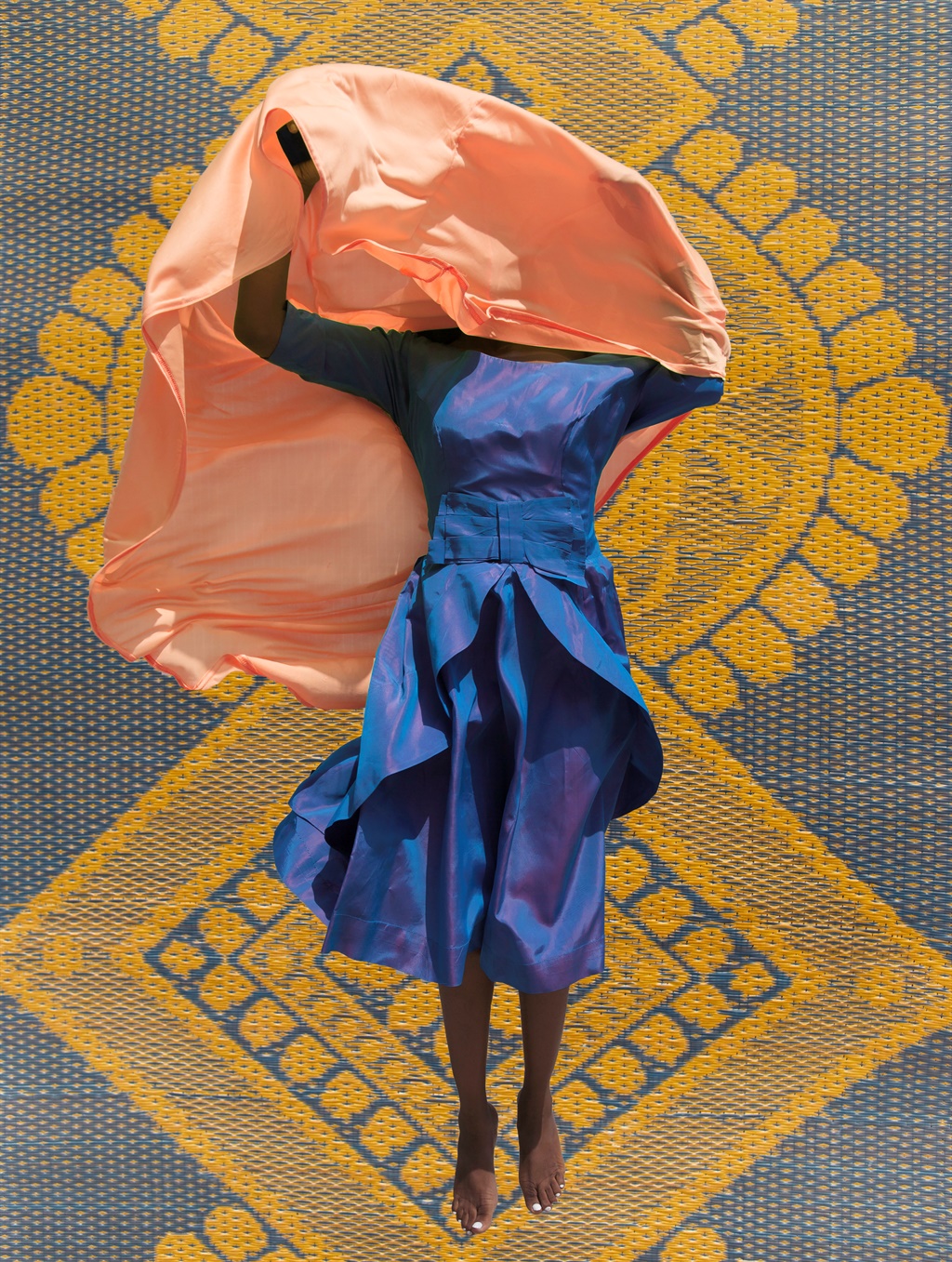 We caught up with Dugger via email to find out more:

1. You were born in the States and now live in Lagos. Why the decision to move?

I first came to Lagos in 2011 after being invited out by a good friend I met in photography school who co-founded the LagosPhoto festival. She introduced me to the director of the African Artists’ Foundation who hired me to help organise and co-curate their programming. Friendships, relationships, creative opportunities and my love for the city have kept me based in Lagos these last seven years.

2. What has your relationship been with JD Okhai Ojeikere's work and what sparked the decision to create your own tribute?

I first discovered Ojeikere’s work in Lagos in 2011 and found it to be stunning. I’ve always had a great love for style and hair and have experimented with my own quite a bit. I was inspired to recreate Ojeikere’s hairstyles in colour in 2017 after a discussion with Wunika Mukan, a friend and creative figure in the Lagos arts and culture scene.

We discussed how fun and bold the series could be, highlighting a traditional practice (and iconic series) using a contemporary medium. In our increasingly connected world, cultural styles and expressions risk appropriation, dilution and abandonment, in favour of mainstream tastes. This underscores the importance of Ojeikere’s work and preserving these practices and history. 3. Representation in the art world has been a big issue of late and debates about who gets to photograph who are ongoing. Do you feel a certain responsibility as a white woman photographing black women?

Considering that I am not Nigerian, and that I am a white woman, I knew it was important that I meet this project and the women with great respect and willingness to learn all I could about the process and history before beginning. The girls I photographed I’ve known for many years, so there is an ease and trust that exists within our work flow.

I also knew I wanted the approach to be collaborative. Most of the clothing was from Nigerian designers and the hairstyles and colors were agreed on after discussions with both the models and the hairdresser, providing the models with input in how they were styled and represented. Representation of black women, men and artists is a critical issue, and one not limited to just the art world. 4. How would you describe your style of photography?

I would describe it as evolving. I wish for it to express both mystery and universality.

5. You’ve co-curated 4 editions of the LagosPhoto Festival. What excites you the most about African photography right now?

What excites me most about African art and photography right now is the work itself that is being produced. More and more Nigerians and Africans are telling their own stories and I feel these stories are contributing to a unique momentum and pivotal creative movement in the contemporary art world.

Read more on:
hairart
MONEY MAKEOVER
Podcast | Mistakes to avoid with your own business