An African girl's guide to Amsterdam

When I first booked my trip to the Netherlands, the last thing I expected to have stirring within me, given our history with their ancestors, were deep feelings of ubuntu. Landing in the Netherlands for the first time was incredibly daunting. The big guns carried by airport security were not the most welcoming of doormats. Maybe because this was my first time in Europe and I didn’t know what to expect.

But that quickly changed because, as it turns out, Dutch people are unbelievably friendly. One of the things I was fascinated with was how happy they are to switch to English to avoid language barriers. Dutch people were so kind and welcoming that this African girl started recognising the indisputable traits of ubuntu in them.

Amsterdam was a culture shock. Besides not knowing which part of the road to walk on, or on which side of the road the cars were driving, I quickly felt right at home. Once I figured out where to walk safely without being mowed down by cars and bicycles, I happily explored the Netherlands’ capital city, and these are the places that gave me the most joy. The Rijksmuseum is home to some of the oldest art, dating back to the Middle Ages

Immerse yourself in history at the Rijksmuseum

Established in 1798, the Rijksmuseum is the largest museum in the country and is home to Dutch art and history dating back to the Middle Ages. It’s in the Museum Square, near the Van Gogh Museum and Stedelijk Museum. The Rijksmuseum is massive and can take half the day to see everything. The museum is home to more than 8 000 pieces of art and history. It’s here that you will see the legendary The Night Watch by Dutch painter Rembrandt van Rijn. The Night Watch is being restored and visitors are welcome to watch this elaborate process unfold from a short distance. In the same area of the Rijksmuseum, you will find the Van Gogh Museum, which houses most of the works of Vincent van Gogh and some of his peers, and the Stedelijk Museum, which is dedicated to modern and contemporary art and design.

I soon learnt that the country has an impressive history of which the Dutch people are proud. I learnt that the Dutch have some difficult conversations about the part of their history that involved conquering other nations. The few people that I had candid chats with about the Netherlands’ colonial history seemed mortified by it. As an African, some of the history triggered some difficult emotions and I was surprised that Jan van Riebeeck didn’t form a big part of Dutch history. One of my first impressions of Amsterdam was the amount of water in the city. Of course, I had read about the canals in this region, but being there was a different story altogether. There’s something magical about watching those boats glide up and down the canals, ferrying tour groups and lovers alike. The tours take about an hour and are presented by experienced tour guides. As clichéd as these canal cruises are, they are also an intrinsic part of the city and you just have to indulge. You have many options. You can hire a small vessel for an hour and have a private tour or you can take a big boat to share with other tourists. You can take a dining cruise and make a party of it. You have a choice between a day or night cruise. At night the city turns into a wonderland, as bright lights embellish the city and couples stroll the streets.

The canals are beautifully lit up. This was an amazing experience for me and could compared only with what I had seen in the movies. Amsterdam was proving to be a dream and, as luck would have it, my cruise was on the Nelson Mandela, a large traditional bus-like canal boat. I shared the the trip with about 20 other tourists. The captain, a self-confessed comedian, warned us about his dry humour and forgot to mention that these jokes would be told in Dutch, English and French. 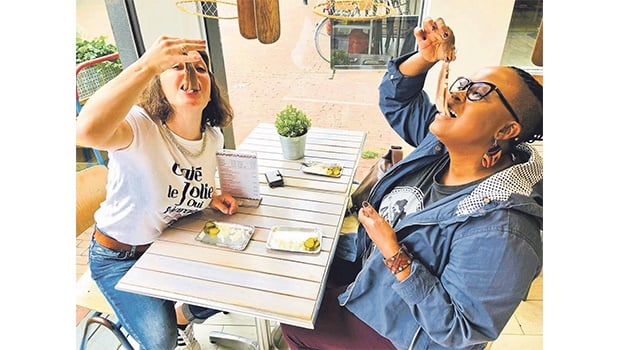 The author tries out herring for the first time

Herring is as Dutch as it gets. The Dutch love their herring. Now, as an African girl, I am used to the odd looks when I enjoy some African delicacies. I love chicken feet and every now and then I can be found chin deep in tripe.

Before I could even try herring I was told that tourists do not like the taste and texture of it. Of course, I was apprehensive. But when I did try it, it was delicious. The texture is not the easiest to swallow but after your first one, it gets better. Herring can be enjoyed with raw onions and pickles.

Other Dutch food was not strange to me. It was food that I had come across before, just prepared differently. The croquette, a small roll stuffed with a filling of your choice, covered with breadcrumbs and deep-fried. This is savoury heaven. The beef croquette is the best, but there are also some vegetarian options if that’s your preference. They can be enjoyed with bread and a pickle. If you walk into any restaurant in Amsterdam, you can buy a croquette or a frikandel with fries. Don’t be shocked when they give you mayonnaise with your fries. Ray Bass on stage at the Kwaku Festival

Go to a festival

I was fortunate to go to the Netherlands in the summer and was spoilt for choice with festivals. Festivals are an actual pastime for Dutch people. Winter can be so brutal in this region that when summer comes, the Dutch come out play. And play they do. This is also a great time for tourists to visit. I, of course, picked the perfect time, festival season.

Amsterdam has a selection of festivals, from indie rock to electronic dance music and jazz. Every weekend is booked. You just have to put on your dancing shoes, hydrate and get ready. I was fortunate to attend the annual Kwaku Summer Festival, which takes place over four weekends in July. The festival has been taking place since 1975 as a celebration of the abolishment of slavery in Suriname, a small country in South America which the Dutch acquired from the English in the 17th century. The name Kwaku originates from the Akan people of Ghana. The name is given to a boy child, born on a Wednesday. It doesn’t get more African than that. My African heart was leaping for joy. The festival is a wonderful medley of music, food and all the dancing you can handle. And, by some stroke of fate, this festival takes place at the Nelson Mandela Park in southeast Amsterdam.

Take photos at the bridges

If you go on a trip and do not take photos, did that trip even happen? If you take a trip to Amsterdam without taking photos at the bridges of Amsterdam, did you travel to Amsterdam? Take advantage of the breathtaking backdrop of the bridges of Amsterdam. Amsterdam has 2 500 bridges in the city centre and at any given time there are tourists and Instagram influencers taking photos on the bridges. You can even hire a professional photographer to follow you to all the bridges and take Instagram-worthy photos. You can take a selfie or ask a stranger to take a photo of you; either way you end up with a beautiful memory of Amsterdam’s most loved features. Just to leave my mark, I decided to take a photo at the canals with my African beads adorning my neck. Call it another Mandela moment.