Viewers were surprised at the news that popular talk show Trending SA had axed its original panel of hosts. But now the show is back with a new format and new faces. Phumlani S Langa meets the next wave.

The national broadcaster has been at the centre of a few hot topics this year, among them the axing of the Trending SA team. Trending SA is a once-popular talk show that harvested its content from social media, relying on the happenings in the digital space to shape the direction for the daily show. It involved a celebrity guest segment that saw a few of the most famous faces grace its stage.

The show, first aired in July 2016, was hosted by four charismatic individuals who, although they didn’t have any say in the scripting, did a lot to draw viewers in. They were the bubbly broadcaster Pabi Moloi, controversial writer and media personality Kuli Roberts, doctor and child star Musa Mthombeni, and the vivacious comedian Nina Hastie.

All four feel no ill will towards the producers of the show, nor do they regret or resent the time spent there. Near the end of its run, the show was suffering from low viewership and started being pushed from one time slot to another.

The channel called curtains on the operation, but with a reprisal in mind. #Trending was invited to give you the exclusive on what to expect in the new season and who the new faces of this brand are.

On #Trending’s arrival at the show’s Studios on Harley in Randburg, we notice a tall silhouette strut down the main entrance to the studio lot, dressed in a fashionable turquoise emerald pant suit and gold heels. Presenter Luthando Shosha, or LootLove, walks by as her hair flickers dramatically in the breeze behind her.

You’re thinking just as we did – she must be involved. Turns out she is, but not in the way you think. King Loot is on hand to anchor a question and answer promotional video the new Trending SA team are shooting. Inside the studio are five empty chairs and a large green screen. There are a number of people, from camera operators to directors, milling about, but one rather attentive producer with a headset walks around making sure social distancing is observed. 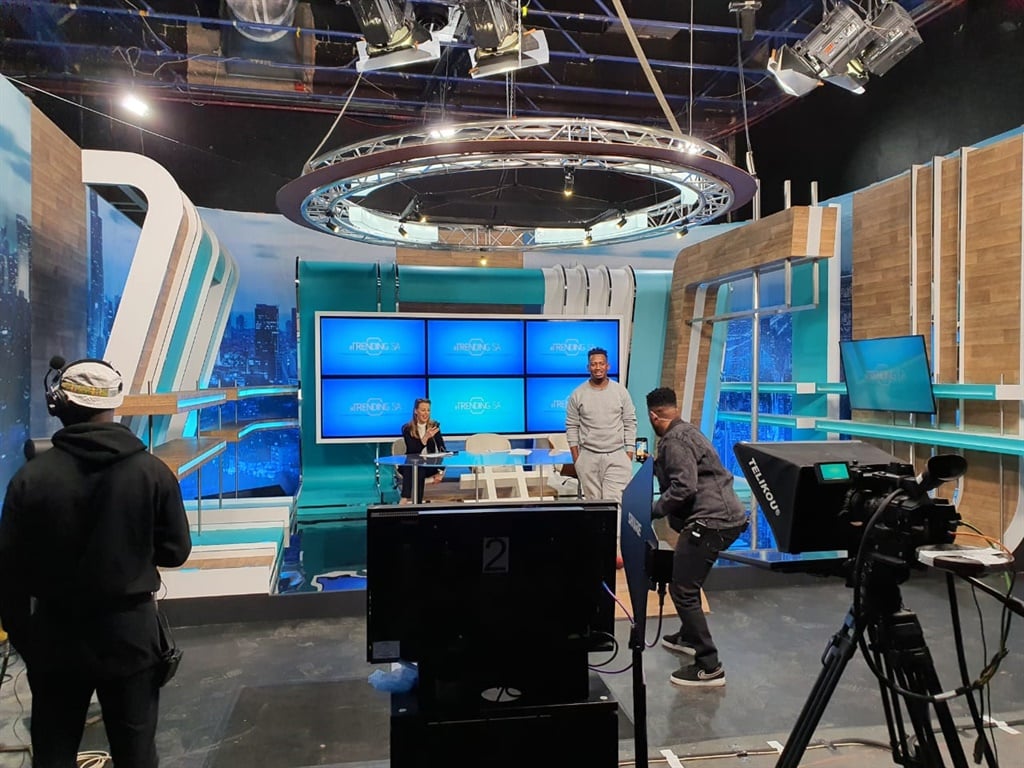 The show won’t only be about what is trending online. Picture: Supplied

We thought we’d be getting a look at the new set but, given that the promo was shot on green screen, as set construction is still under way, this doesn’t happen. To get a better understanding, we steal a moment with the series producer Sive Nkukwana.

“Television right now serves as a sound board for people. There’s a lot of uncertainty around many issues and we want people to either learn something or spark a conversation. Even if we can trigger a bit of empathy and tolerance towards each other.”

What is the one thing they have made sure to make different this time?

“The show is on its fifth season and I feel like we’ve grown so much. We’re socially conscious and we have a heart. This season will bring a lot more human interest stories; everyday South African stories.”

Television right now serves as a sound board for people. There’s a lot of uncertainty around many issues and we want people to either learn something or spark a conversation. Even if we can trigger a bit of empathy and tolerance towards each other
Sive Nkukwana

“The fourth person is you; we wanted to capture the heart and spirit of the country. It’s very important to us but we did not want to compromise on the show or the heart of it.”

The show won’t only be about what is trending online, but what people are discussing at taxi ranks and around the dinner table.

“We’re now prime time, so we will be able to talk to different generations. Even though it is for millennials, we can influence mind-sets.”

The producer, calmly says she plans to run the show like an editorial room to handle the influx of information they are looking to deal with. As tongue in cheek as the old show was, it didn’t wade too far past where the waves of topical debate were most rough.

The show is on its fifth season and I feel like we’ve grown so much. We’re socially conscious and we have a heart. This season will bring a lot more human interest stories; everyday South African stories

Hoping to help Nkukwana handle the rough seas of more hardened news are Refiloe Mpakanyane and Elma Smit, wrapped in jackets to fight the chill and seated as their make-up is quickly re-examined. They both seem relaxed and natural.

Mpakanyane’s best known for her work on the Weekend Breakfast show on 702. To add to her voice-over work, she has also tried her hand at acting and appeared in the Clint Eastwood film Invictus (2009).

Smit has built a career in sports broadcasting through Jacaranda FM, and has covered major sporting events, including the Rugby World Cup last year, where she worked from England. The fourth seat belongs to you. Picture: Rosetta Msimango

The last member, Mthokozisi Cele, also known as MaBlerh, has been in the industry for some time on shows such as RGB, Selimathunzi, Live Amp and Katch it with Khanyi. The Durbanite has also worked on Ukhozi FM and now gets the call-up to the main stage as a central anchor.

Responding to being the new faces of Trending SA, Smit, all in purple, chimes in first: “Superexciting and a great opportunity to do something that no one has ever backed me to do. I feel like someone took the leash off and I can run free.”

Wearing a burnt orange dress and a short hairdo, Mpakanyane agrees with her colleague: “In the same instance as Elma. While I’ve done live TV and anchoring, this is a different element and I’m looking forward to that.”

Without giving away the recipe, Mpakanyane reveals what might distinguish this new panel from the last.

“Speaking for myself, it’s just wanting to, as much as possible, dig down to the facts. To be able to say we are backed up by some kind of material evidence.”

They’re looking to have a conversation, but not for the sake of mere chatter. Smit, drawing on experiences she’s had in heated debate with her co-hosts says: “What I love about both Refiloe and MaBlerh is that they are willing to come to the table and stay there.”

Speaking for myself, it’s just wanting to, as much as possible, dig down to the facts. To be able to say we are backed up by some kind of material evidence.
Refiloe Mpakanyane

Mpakanyane is confident about the direction of the reboot.

“As far as garnering people’s opinions and thoughts is concerned, I think at some point Trending SA was limited to one or two social media platforms. So that’s opened up quite a lot. You’ll see in the new format how we engage with people – there’s a call-in element and a voice note element, so much more interaction.

And while we understand that we’re looking at trending topics and topical things, the producers understand that not everyone is on Twitter – it doesn’t represent all of South Africa. We’ve gone further in making sure the access is there.”

The thorn among the roses is a man we bumped into while on a caper in Venda last year at the infamous Royal Heritage Festival. Doing the suit and sneakers thing, MaBlerh takes a moment with us outside the studio.

“I always told myself that I’m not going to limit myself. People in this industry have this mind frame that you can only have this one thing and do it to the best of your ability. I’m like, this is my life; I’m going to do me, I want to do as much as I possibly can. I’m going to reinvent myself every now and then.”

Having done TV before, he relishes the chance to do his first major show: “When I found out that I was going to be working with these ladies, I had to check myself. These are not play-play people. These are proper broadcasters. Elma is an amazing broadcaster and Refiloe has been on radio for over 10 years now.”

Being in a position where he has to up his game is prime real estate as far as where his mind is at. He’s what we would consider the firebrand, more like Shaka Sisulu who was on the first panel but was later replaced. The show was probably at its best then as he was likely to say something that would get him thrown off the air. He also fancies himself a singer and is a connoisseur of House music, something MaBlerh is still pursuing avidly.

So what makes this reboot different from the original? “Look, it’s a different format. The guys before us, they did their thing. They were amazing – but it was a different show. I’m glad we’re coming in and doing what we are as there can be no comparisons. We are still tackling issues, but it’s different. Same show, just the structure is something else.”

How does he feel about being the rebellious soul on set?

“I’ve been on radio and I’ve never had a complaint filed against me with the Broadcasting Complaints Commission of SA. With humour, I tell people it’s not about just saying something funny. There are a lot of layers – first of all, sensitivity and reading the room. I need to be cognisant of the time – 6pm is family time. Whatever I say, I need to be mindful of what I might joke about, as kids could be watching.”

The fourth member of the panel is you; the extra seat is for you and your opinions. Everyone we spoke to emphasised this, and their expansion to more than two social media platforms is what they hope will secure this. This is a early time slot and it seems as though Naledi Television Network has fortified the foundations for their fifth season with sturdy replacements and a new lease of life. Only time will tell.

We live in a world where facts and fiction get blurred
In times of uncertainty you need journalism you can trust. For only R75 per month, you have access to a world of in-depth analyses, investigative journalism, top opinions and a range of features. Journalism strengthens democracy. Invest in the future today.
Subscribe to News24
Related Links
TrendingSA reboot: Nina, Kuli and Musa have no hard feelings after being axed
New brooms for new Trending SA
Yvonne Orji’s celebratory comedy
Next on City Press
Book extract | Remembering by Andile Gaelesiwe: The violation of rape