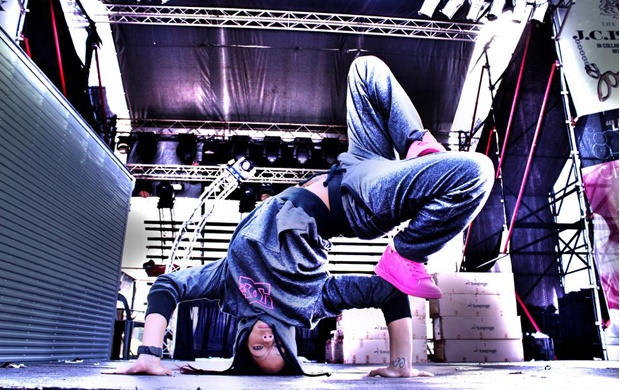 This is a story about women who dance and how they push themselves to physically taxing limits for the sake of expression. It’s also about when the gigs aren’t piling up, and the dance competitions are few and far between. It’s about the emotional exhaustion of being trampled on by musicians, television directors and the like. This is a conversation curated by the author and given the stamp of approval by the women’s commanding stomps, pumps, fist bumps and spirited contortions.

Like you would do when announcing your entrance at an umgidi (dance ceremony) hosted in an Afro-galactic imaginary world where disco, pop, bubblegum and kwaito blur into one movement, guided by one thing: the beat.

Courtnae Paul (21) is sprawled across the floor, breathing, heaving from an intense rehearsal session with her mates from Clinch Crew. I greet and find a comfortable space to sit. Courtnae, a petite, serious-looking break dancer with a distinctive piercing on her left lower lip, keeps mum through most of the conversation, letting other members do the talking. “She’s the best B-girl [break dancer] in the country,” says each one of them at some point. That was two years ago.

The Clinch period is a distant memory. Courtnae is now 23 and featuring in a dance challenge issued by DJ Black Coffee as part of an online campaign for his smash hit featuring Nakhane Touré, We Dance Again. She also choreographed an ad for a cellphone company. Choreography is what she does besides MCing gigs, deejaying (she’s resident selector at Soweto’s Zone 6), and taking part in competitions. Dancing is, for now, a deviant side hustle; a let-me-get-my-BCom-first occupation. “I am writing exams to finish off [my degree], then it’s full steam ahead with some pretty awesome projects lined up,” she says.

“This [degree] is me being ‘settled’,” Courtnae later adds.

Break-dancing? She digs how breaking “takes music, rhythm and athleticism, and mixes them into a worldwide culture that speaks to all walks of life”. She also likes it that one can’t take short cuts. “If you want to do it, you have to constantly work for results,” she says.

Her range isn’t just limited to six-step routines and spinning on her head in dance cyphers populated by Adidas-rocking hip-hop heads. She’s also fluent in other dance techniques (like house and hip-hop) and thinks that dance battles and competitions are great at revealing one’s “strengths and weaknesses”, and diagnosing what needs to be paid attention to achieve a higher level of skill.

Courtnae is responsible for the moves you see when Toya Delazy performs, and also does work for Da Les. She choreographed his and AKA’s set at the Durban July. That’s her hometown, by the way.

“They all have a different process,” says Courtnae about conceptualising a dance piece for an artist or a corporate client.

One has to “play to their characteristics and the audience they serve”, yet always be “exciting, risky and true to my style”.

“I can honestly say I’m one of the best women in the dance industry. I can do all styles. Mostly, when I’m on stage, I feel free. ‘Free’ meaning that I don’t hold anything back,” says Tarryn Alberts (24) in an epic video promo shot after she had won in the dance category of a Sprite competition.

She joined a crew at 14. When I first met her, she was part of the V.I.N.T.A.G.E Cru, a powerhouse of the insanely talented whose members and ex-members slayed dance floors, music videos, competitions, and more. We met on the rooftop of a building in Jozi’s buzzing CBD.

“At the end of the day, when people see a dancer, they are watching music in motion,” she says.

“It takes a brilliant dancer to make you see what the music is doing. You can’t go on stage and be pap [flat]. You can’t, I’m sorry. It’s like...” She pauses and waits for the words to catch up with her racing thoughts.

“I mean, some of us take it seriously. It’s our nine-to-five. Like I said, it’s music with pictures, like, yoh!” Tarryn puts hand on her forehead. “It’s deep,” she declares.

In the next few months, our numerous attempts to meet are scuppered by rehearsals, shoots, more rehearsals and performances.

There she was dancing in front of multitudes on a world tour with Die Antwoord. There she was again in a video by rapper Riky Rick. As the lead in a video by Lucky Charmes, she strutted her krumptronic femme fatale physique across Jozi, the mind-boggling network of a jungle she calls home.

It’s a trip, one that allows her to support her family through her art, and she looks effortlessly cool while doing it. But there’s still the issue of disrespect.

“Lots of artists, when they wanna work with us, they come one day for 30 minutes; wanna learn something. You can’t do that. We put 10 hours every day in a rehearsal to make something happen on stage for two minutes. They don’t even look at you in your face when they greet you; they’re just like, ‘Ah well, they’re just the dancers’,” she snorts.

There’s a recurring theme in my conversation with Manthe Ribane over the phone on a Monday morning: She’s not one of us. She speaks of near and distant futures, of creating worlds never seen or heard before. Her voice is soft, hushed, almost hypnotic. She ran the Soweto Marathon over the weekend, inspired by her father who passed away in 2010. He had been a pillar of strength throughout her childhood, taking her to art exhibitions and teaching her to open up to different ways of seeing and thinking about the world around us.

Just before running, she posted on her Facebook: “Dad, thank you. Now I’m you. Geared up. Ready. Steady. Goooooo.” You could almost touch the emotion in
her words.

“After our mom passing on, they separated us,” she says, referring to her siblings Kokona and Tebogo Ribane, with whom she runs the creative studio Dear Ribane 113.

“We eventually lived together again after my brother was done with matric. We’re all creatives and passionate about art. We got a lot of that from our father.”

Manthe’s many things. Assigning any one label would be lazy, reductionist even. She’s a muse to acclaimed photographers Chris Saunders (“I really resonate a lot with what he captures and what he wants to put in history.”) and Andile Buka, who she sees in the same light as Santu Mofokeng. (“He’s not digital. He’s old school. The quality and the texture…”)

She continues: “It’s always great to work with people who have a bigger plan, not just a social get-together.”

She and Saunders have been collaborating since 2011 – most recently on a collaboration/exhibition with experimental New York women’s wear label NOT. (See the cover of this edition.) He also directed the video for UK producer Okzharp’s Dear Ribane, a song with syncopated, half-rapped, half-sung lyrics that hark back to snannapopo, a familiar childhood playground song.

Manthe’s killing it all round, whether on tour as a dancer with Professor or Die Antwoord, or doing a meditative pantsula piece or swaying on the runways of high fashion like she did during SA Fashion Week recently, or just showing mid-morning love to everyone who would like to receive it on a Saturday in the trendy area of Braamfontein in Joburg.