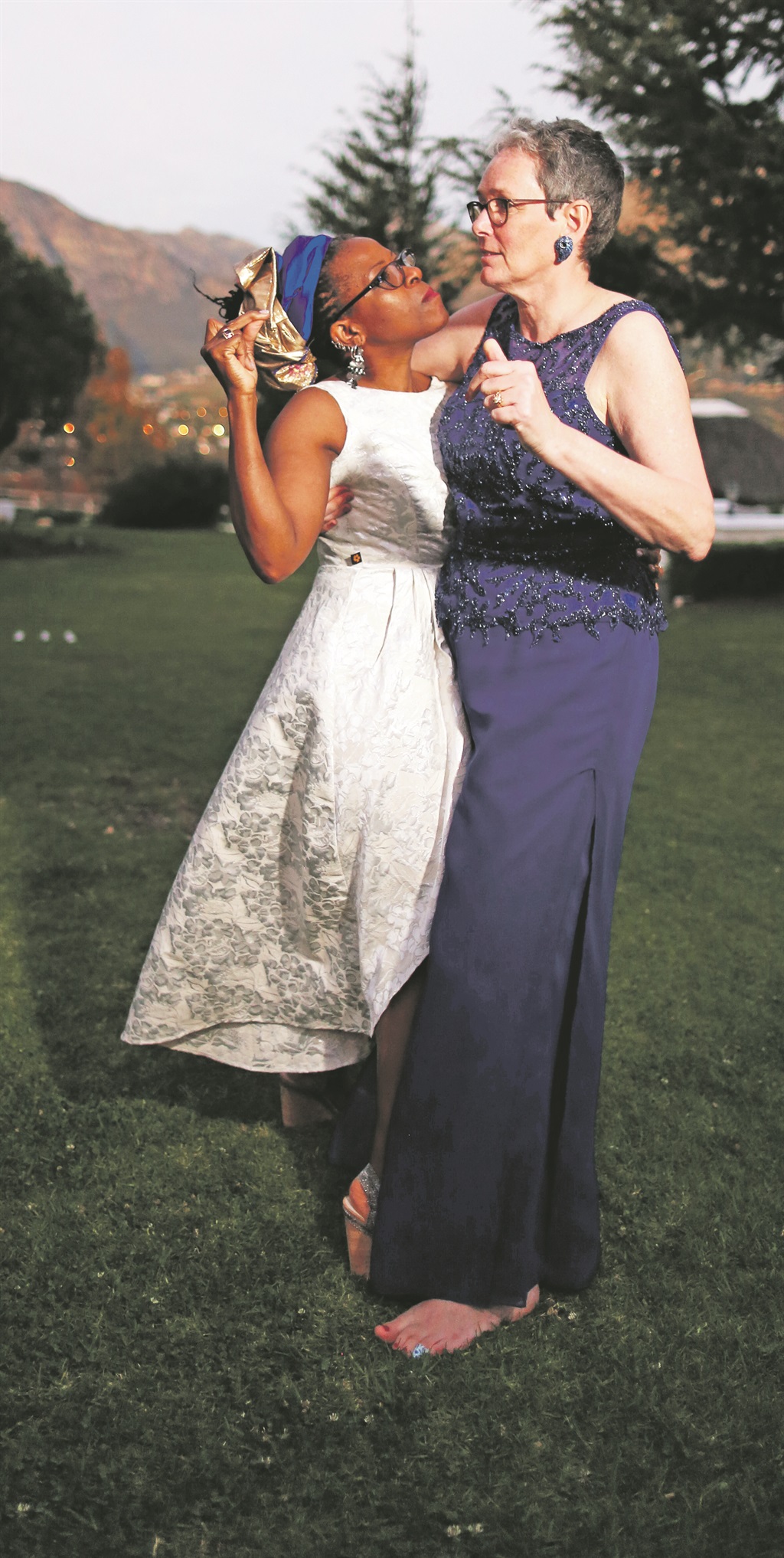 And Archbishop Emeritus Desmond Tutu’s giggle rang out over the Mont Rochelle Hotel’s terrace near Franschhoek, as his wife Leah rocked beside him.

Marceline had been a little overeager, leaning in for a kiss before Reverend Charlotte Bannister-Parker – who led the ceremony – had decreed they were married.

However, soon enough Bannister-Parker said: “We now recognise you as wife and wife. You may kiss each other.”

I am planning the honeymoon, and Marceline is checking up on me. It’s very exciting

About 80 guests applauded as the couple embraced on Thursday afternoon against a backdrop of mountains and vineyards. This marks the Tutu-Van Furths’ second wedding, coming five months after their legal wedding in the Oegstgeest City Hall, in Holland, in December.

The pair beamed at each other – Marceline in a shimmering cobalt bodice and floaty chiffon pants; Mpho in a floral-textured cream dress with an open back, revealing a gecko tattoo curled on her left shoulder.

Not even the keyboard player’s cellphone, ringing inopportunely, could spoil the moment.

“Thank you for the love between me and Marceline,” said Mpho, in prayer.

Marceline, an atheist, told the crowd she was getting out of her comfort zone by reading from the Bible for the first time. She read 1 Corinthians 13 in Dutch, concluding with: “So now faith, hope and love abide; but the greatest of these is love.”

Bannister-Parker smiled: “That was beautifully read, Marceline. And for a first passage read from the Bible, that is one of the very best.”

Mpho’s eldest brother, Trevor, and her daughters from her first marriage to Joseph Burris, Nyaniso (19) and Onalenna (10), were in the front seats.

Before the ceremony started, Nyaniso welcomed guests, requesting that no photographs be shared on social media.

Then Bannister-Parker announced: “Let us start. The brides are actually ready!” The small crowd included 26 guests from the Netherlands, among them Marceline’s daughter Pien (16), also from a previous marriage, and her father, Ralph. Pien lit a candle to commemorate Marceline’s late mother, Ghi.

Her brothers, Wouter and Eric, had a turn behind the microphone to read The Apache Wedding Prayer.

Also on the programme was Marlene le Roux, chief executive officer at the Artscape Theatre, who sang Francis Lai’s composition, Love Story, to the couple.

After the ceremony, the brides sashayed back up the aisle to a Natalie Cole number, followed by family members, as friends clapped.

Soon the brides kicked off their high heels, while guests mingled on the lawn sipping tall flutes of Pierre Jourdan Rose.

At one point, the Archbishop Emeritus stopped to look for Leah. “Where is the mother of my children?” he asked. That evening, a reception dinner at the adjoining restaurant featured a four-course vegetarian spread, including chilled asparagus soup with peas and mint; summer grape and Cape ruby gazpacho; sweet potato, chickpea and spinach curry; and dairy-free dark chocolate tart with strawberry compote, with Paul Cluver Riesling Noble Late Harvest 2013 on the side. Mpho is vegan.

Tables were simply decorated with succulents in bright pots.

Mont Rochelle belongs to British businessman Sir Richard Branson. The pair said they love the estate, with Mpho describing it as “a new space and very funky”.

On Wednesday, the couple showed some of their guests around Robben Island.

“After visiting the prison, we went to the shoreline, where we actually saw some whales. It is out of season ... That sighting, to me, was just one of many signs that this union is so special,” said Bannister-Parker.

Their honeymoon destination remains a secret.

“I am planning the honeymoon, and Marceline is checking up on me. It’s very exciting,” said Mpho.

When they return, she will go back to her job as executive director of the Desmond & Leah Tutu Legacy Foundation‚ after being cleared by an investigation initiated by the board after their initial legal wedding in Holland.

In a previous interview, the couple told City Press that their love transcends religious differences and also distance: Mpho lives in the Cape Town suburb of Milnerton, and Marceline in Amsterdam.

Marceline is professor of paediatric infectious diseases at Vrije Universiteit Amsterdam, where she holds the Desmond Tutu Chair in diversity.

We live in a world where facts and fiction get blurred
In times of uncertainty you need journalism you can trust. For only R75 per month, you have access to a world of in-depth analyses, investigative journalism, top opinions and a range of features. Journalism strengthens democracy. Invest in the future today.
Subscribe to News24
Related Links
Reverend Mpho Tutu van Furth returns to work at the Tutu foundation
Tutu and Van Furth's laptop love affair
Tutu gay wedding creates conundrum for Anglican church
Next on City Press
Meet Big Xhosa – the real deal or a spoof artist?