Thomas the Tank Engine gets a Kenyan friend 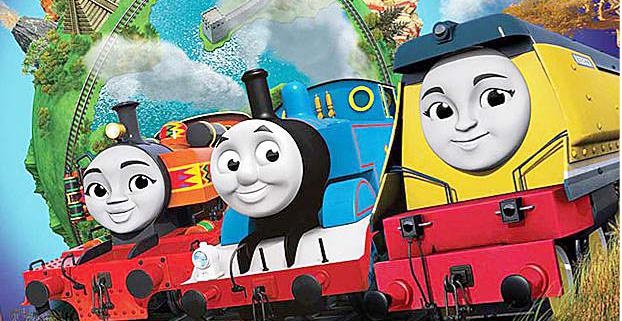 Beloved British tank engine Thomas has a new movie – with a very long title and at least two exclamation marks. Thomas & Friends: Big World! Big Adventures! The Movie launched to much fanfare at a media screening in Sandton, with games, competitions and Afrikaans sensation Bobby van Jaarsveld there to sing the title tune.

In this iteration, Thomas has a fresh adventure and travels beyond the island of Sodor with a new friend. Ace the racing car takes him out of his comfort zone and around all five continents. In Africa, he goes to Kenya and meets Nia, who helps Thomas in most of his encounters. The film is filled with music, with the standout being Ace’s songs sung by Australian singer and entertainer Peter Andre.

I found the portrayal of the African characters in the film to be very good. When Thomas went to Dakar in Senegal and Dar es Salaam in Tanzania you could tell you were in Africa.

Nia looks great painted in geometric patterns and the decorations you’d imagine on a tank engine from Africa.

I appreciate that the film teaches kids about friendship, bravery and not being afraid to go the extra mile for a friend. There’s also a lesson about accepting help from friends and not going all alone when it’s tough.

There was a point where Thomas tried to push Nia away when she tried to help him, luckily she was patient.

My children, four-year-old Mawande and five-year-old Lathi, particularly loved Nia and kept telling me that Thomas had met a girl.

They also loved Ace and wondered whether Thomas would ever catch up with his speed. They were interested in the names of the African cities and kept asking how you pronounce Dar es Salaam and Dakar.

Unfortunately, the film’s animation is nothing special and it felt a little too long for kids to sit through – especially during the songs. I would recommend that people wait for the DVD.

Read more on:
movie review
MONEY MAKEOVER
Podcast | Mistakes to avoid with your own business