Book extract: The day I died New Daughters of Africa is a new international anthology that tracks a grand history of writing by more than 200 women of African descent. Picture: Supplied

An extraordinary new international anthology tracks a grand history of writing by more than 200 women of African descent across all genres and eras. In this haunting extract from a short story by Sade Adeniran a Nigerian girl is captured by Boko Haram forces.

I am guessing you don’t know who I am because I’ve yet to do anything remarkable with the life God gave me.

But, most importantly, you don’t know who I am because the 14th of April 2014 was the day I died.

That was the day they came for us.

It was around 11.30pm. I was asleep at the time, but I heard the gunshots in the dream I was having.

The sharp tat-tat had no place there, but I ignored the sound and carried on dreaming.

I can no longer remember what that dream was about. All that has stayed with me from that night is the waking nightmare my life became.

The moment the rough hands of the man shook away my sleep, the sweet dream disappeared into the place of loss.

The horrible smell from his unwashed body made my stomach give him the tuwo shinkafa I ate earlier.

It went all over his holed-out muddy boots. I might have kept it in my belly if not for the gun slammed into my stomach when my legs failed me. I heard Amina lose hers too.

She was my archenemy because of the many disagreements we’d had over things that small girls fight over.

She hated me mainly because I was smarter than her; she came second to my first in all the subjects we studied.

My favourite subjects were biology and English. However, in that moment of sharing our undigested dinner with our Boko Haram captors, neither of us was thinking of the study of living organisms or how to use a conjunction in a sentence.

At that moment in time, petty grievances were set aside as we both wondered if we would ever see our families again.

Others wailed and as our eyes met across the dormitory filled with frightened children, we briefly became friends, allies, the enemy of my enemy.

We finally had something to unite us. We had been fighting over rubbish all school year and became staunch allies over regurgitated tuwo shinkafa.

I don’t know if our friendship would have lasted, but for a little while we bonded over a minor victory, which was of little consequence.

But it is these little things that my mind clings to, because the other things, I cannot speak of or bear to remember.

I do not know what happened to Amina, she was braver than me and the rest of the girls. She ran, I did not. Shots were fired after the few who were brave enough to run.

I do not know if they survived or if they died in the bush surrounded by nothing but trees, but in my moments of hope, I liked to think they made it back home and that help would soon be on its way.

I imagined my father, Bible in one hand and the holy cross in the other, coming into camp and begging for my release. We had plans; he had plans for me. 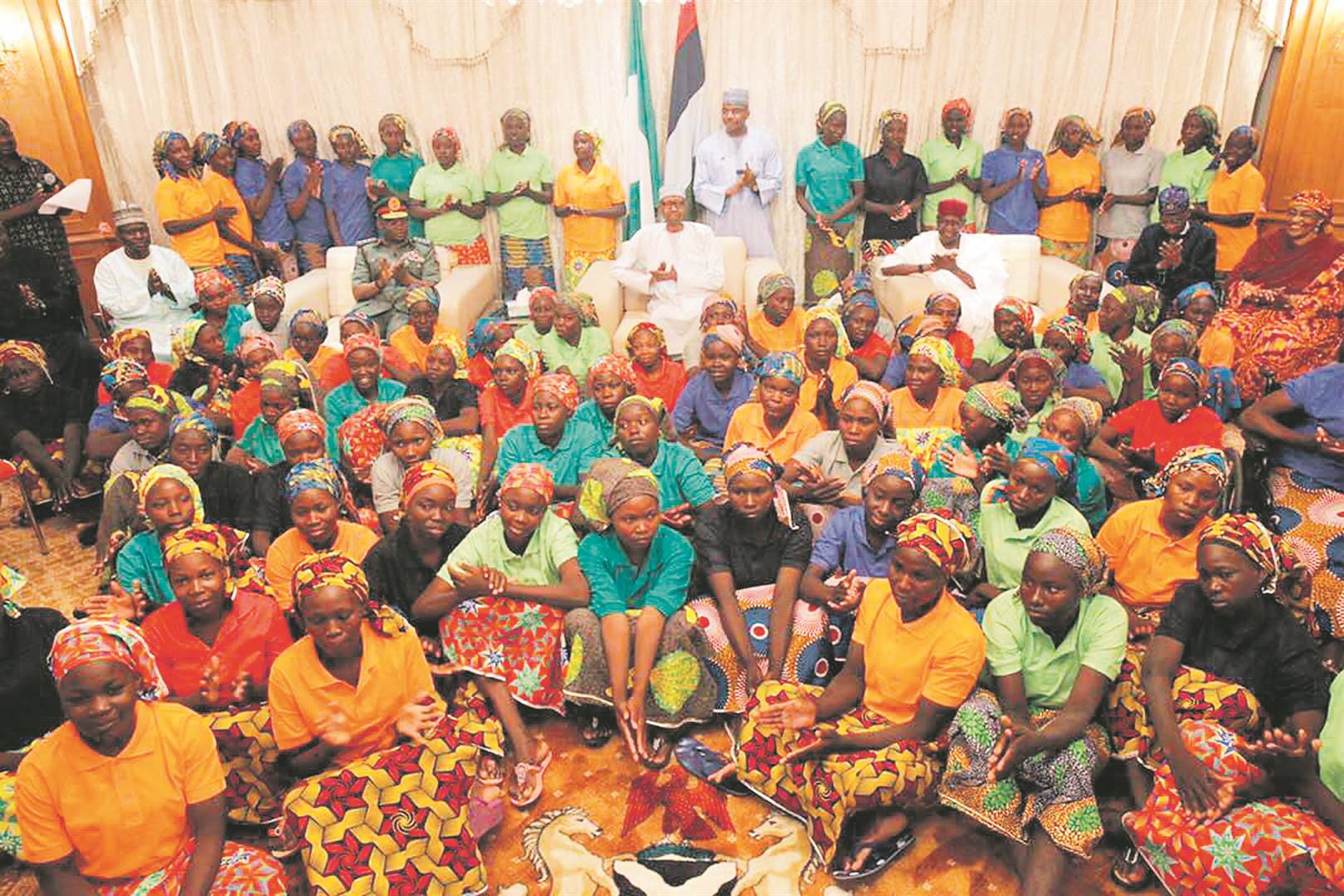 The girls releasedd from their Boko Haram captors in May 2017 are taken to the capital, Abuja, to meet Nigerian President Muhammadu Buhari. Picture: Supplied

The first girl in his family who would go to university and become a real doctor. My mother did not agree, she wanted me to marry, to become someone’s wife.

It was not what I wanted, neither was becoming a doctor, but going away to university would allow me the chance to see more than our village.

What I wanted more was to see those places I read about only in the novels I ploughed through. To taste the food I saw them cooking on the television.

The only programmes my father watched were the foreign cooking programmes, so they were the only ones I and my younger sister watched.

I try not to think about her. If not for the fact that she was ill that week and had gone home to get well, she too would have been in school and my parents would have lost both their children.

There is not much comfort in this for me, but at the same time it is a good thing.

I did not want to die; what I did not know was that I was already dead. I curse Boko Haram with my last breath, I pray for them to feel a tenth of the pain I have suffered, the pain I know my mother has suffered and will continue to suffer until the day she goes to her ancestors.

I want to wish ill on their families and, if they have daughters, I pray for what happened to us to happen to them. But as I say these words, I know that it does not make me a good Christian.

I have prayed for deliverance, for rescue and for mercy, but the bitterness on my tongue is more bitter than bitter leaf. Where is God?

Hours turned into days and the days into months and the months into years. And still there is no rescue, no deliverance and no mercy. My father will not be coming to collect me.

The moment the rough hands of the man shook away my sleep, the sweet dream disappeared into the place of loss. The horrible smell from his unwashed body made my stomach give him the tuwo shinkafa I ate earlier.

My father would tell me that it is a sin for a person to take their own life, but if that life has already been taken, then surely God will let me into heaven? I wanted to live, but two stillbirths sealed my fate.

The husband I did not want has divorced me and I have become a wife to many. When I felt the new life stir within me for the third time, I did not know who it belonged to.

What I did know was that I could not continue. They call me a witch because of the dead babies. It is true, I did not want any child to survive, how could I?

Could I truly love a child born of rape? I felt nothing but hatred towards the man they forced me to marry.

I cooked, cleaned and performed the duties of a wife; the one thing I would not do was renounce my own religion. It was the last piece of home I could cling to, they had taken everything else.

The times they took my body, I removed my mind and escaped to other places. I imagined myself arriving at university and graduating with my proud father in the audience clapping and celebrating my success.

I imagined myself in a fancy restaurant in Lagos eating suya with a knife and fork. I imagined myself on an aeroplane, high up in the heavens and as close to God as an ordinary person can get.

These imaginings floated through, but I was never able to hold on to them for very long. They were always vague and with no definition.

I’d never been beyond our village and the school gates, so the picture of my graduation contained just the family dressed in our Sunday clothes posing outside our house for photos.

The restaurant where I ate suya with a knife and fork looked like Alhaja’s house. Her husband is the richest person in our village and their house has an indoor kitchen.

So the restaurant looked like the inside of their house. It made no sense, but it helped pass the time.

I could not picture the inside of an aeroplane because I’ve never seen the inside of one. So instead I imagined floating in the clouds in a car with wings. This car also managed to resemble Alhaji’s car.

The only difference: the wings; and instead of the boring black, it was a tomato red, which made it stand out against the clouds.

My body was theirs but my mind was mine and it soared and explored. I stopped screaming when I realised that only made it worse. Sade Adeniran is a writer and film maker who is able to turn pain into compelling and memorable fiction. Picture: Supplied

Born in London to Nigerian parents, she was taken back to her father’s village in Nigeria at the age of eight and spent her formative years living with her grandmother in Idogun, Ondo State, before returning to the UK.

She has written for radio, theatre and film but is best known for her debut award-winning novel, Imagine This, which won the 2008 Commonwealth Writers Prize for Africa.

She is also a film maker, and has written, produced and directed several short films that have screened at various festivals around the world.

Related Links
Book Extract: The Moment of Lift by Melinda Gates
Ben Okri: The first revolutionary act is to ask questions
Book Extract: How poverty bred a warrior
Share
Next on City Press
Covid-19: The human faces behind the surgical masks