As we enter a new decade, politics will dominate the news agenda, with the ANC’s national general council set to be a stage where President Cyril Ramaphosa’s grip on power will be put to the test.

Mondli Makhanya reckons that news will be all over the place, but there are those headlines that won't make it to our papers this year.

DA chairperson Helen Zille took to Twitter yesterday to reveal her comprehensive list of New Year’s resolutions, top of which is to say nice things about black people.

Zille said she realised during her Christmas holiday in east Africa that there were many nice black people. She said she visited Masai cultural villages and had seen nothing but smiles and pleasantness.

“They seemed so happy, tending their livestock and doing their dances. None of them was interested in affirmative action or BEE. When I asked them, they just chuckled as if to say: ‘What are we going to do with that?’”

She added that even their singing and dances were not aggressive like those seen at South African political rallies.

The conclusion she reached, she said, was that if white people spoke as nicely to and about black South Africans as the tourists did to the Masai, there would be a breakthrough in race relations here at home.

“I will lead by example. Every week, I will find one good thing to say about our black brethren. Watch this space.” 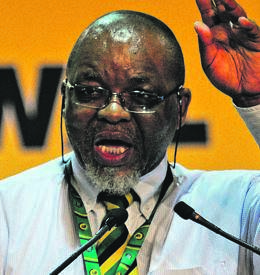 In what the marketing industry has described as breathtaking innovation, the Tiger Brands group has unveiled Mining and Energy Minister Gwede Mantashe as its first political brand ambassador. This follows rave reviews of Mantashe’s sexual exploits by renowned slay queen Lerato Makgatho.

The company’s marketing director, Maxwell Manning, said Makgatho’s use of the word ‘tiger’ in reference to Mantashe’s prowess had sent sales of their products rocketing and even caused the doddering share price to “perk up”.

“It was incredible. There was a stampede for our products. All the major retailers said they had never seen anything like it.”

As part of his ambassadorial duties, Mantashe will be seen eating various Tiger Brands products ... just before and just after.

This development is seen as a breakthrough as this will be the first time a sitting minister becomes an official ambassador of a commercial brand.

JACOB ZUMA CALLS THE MEDIA TO TELL THE TRUTH In the invitation, Zuma’s senior media officer Ndondengathenjiwa Hlatshwayo said the erstwhile head of state wanted to celebrate his 78th birthday by experiencing what it’s like to tell the truth.

Hundreds of reporters who gathered at the Sandton Convention Centre spoke in excited tones about what Zuma would say about his corrupt relationship with Schabir Shaik, his loyal work for the Guptas, and how he managed to father as many children as there are players in the entire Premier Soccer League and National First Division.

Another attempt is expected next year on the eve of his 79th birthday. Ever since she took over as Public Protector and has done nothing of the sort, Busisiwe Mkhwebane has been holding prayer meetings and announcing on social media that God is on her side.

But God seemingly didn’t get Mkhwebane’s message and she kept making deliberate blunders and losing each court case she fought. However, it seems God is finally listening as Mkhwebane finally won something.

Sources say staff were startled when she came out of her office screaming: “Hallelujah, hallelujah, God is great!”

Apparently she received a notification on her cellphone that she had won £150 million in the UK lottery and needed to contact the number at the bottom of the notification to collect her winnings.

SIHLE ZIKALALA WANTS TO GROW UP Angered by the Shembe church factions’ refusal to accept his mediation because he is too young to understand adult conflicts, KwaZulu-Natal Premier Sihle Zikalala told close aides that he now wanted to grow up.

Puzzled associates assumed he wanted to behave more maturely, but it transpired that the diminutive Zikalala wanted to add several inches to his height.

He told them that if politicians such as Julius Malema could lose weight so quickly, then surely there must be a way for him to grow.

Missions have been sent to the ANC’s trusted medical experts in Russia and Cuba to find out if such a procedure exists. Safa president Danny Jordaan has announced that he will be stepping down from his position after a century and a half in office.

In a lengthy statement issued by his office, Jordaan, whose age is a closely guarded secret, said he felt that it was time to hand over the reins to a generation of leaders who had not lived through the trauma of two world wars, the 1913 Natives Land Act and the 1922 mineworkers strike. He said his decision had been influenced by recent developments in the Southern African Development Community.

“When I saw Robert Mugabe forced out of office, I wondered if maybe it was time up for me; if something like that could also happen to a man as young as I.

“And then when Mangosuthu Buthelezi handed over the baton at his youthful age, I again thought about it,” said Jordaan.

Asked if he would be doing exit interviews with the media, his office said Jordaan would be taking a “quick nap” and would be available in two days’ time.