It’s time to get real about Ramaphosa Cyril Ramaphosa during the 2019 state of the nation address

Those South Africans who have built the president up to be some kind of saviour are in for a rude awakening, writes Rapule Tabane

Over a while, I have come to believe that many South Africans have remade President Cyril Ramaphosa according to their own outlook.

By this, I mean that there is the Matamela Ramaphosa we all know, with his great qualities, his limitations and the political environment he operates in.

But then there is also the exceptional CR – the Ramaphosa who exists in the imagination of many.

He’s the one who will clean up corruption, ensure that former president Jacob Zuma and his cronies are sent to jail, defeat ANC secretary-general Ace Magashule, get Public Protector Busisiwe Mkhwebane removed from office and, yes, create millions of jobs for the millions of unemployed South Africans.

CR feels like someone who has just landed from Mars and is about to wave his magic wand and free us all from our collective misery, which includes the threefold challenge of poverty, unemployment and inequality.

My fear is that those who portray him as the answer to all of South Africa’s problems – and spend time attacking his perceived enemies – will soon suffer an about-turn and turn against CR because he would have failed to meet their (unrealistic) expectations.

We have transferred our expectations on to CR, making it his burden to bear. I am not sure why we have done so.

I can only speculate that it is because we have come from the lows of Zuma’s presidency and, in contrast, Ramaphosa’s election to the highest office in the land has not only given us hope, but also heightened our expectations, making us believe that we are at the top when, in reality, we are far below that.

A brief recap: Zuma was forced to step down in February last year, shortly after Ramaphosa’s election at the ANC’s 2017 Nasrec conference.

With the latter’s promise of a “new dawn”, many wanted to buy into his vision. Now it appears that, in the midst of our lacklustre economy, Ramaphosa is all there is to believe in.

Added to this “hope in despair” is the fear that if he does not get the country right, who will?

People look at the ANC leadership around the president, from David Mabuza to the younger MPs, and are left uninspired.

They look at leaders of opposition parties, such as the DA’s Mmusi Maimane and the EFF’s Julius Malema, but find cold comfort when searching there for someone to lead us to the promised land. 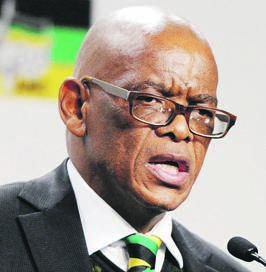 But this, too, is cold comfort. In looking to Ramaphosa as a kind of saviour, are we not setting ourselves up for failure?

The cold, hard fact is: Ramaphosa is president of the country because of the ANC.

To try to define him outside of the party with our imposed values is a mistake.

He will always act within the value system and milieu of this 107-year-old organisation.

Although the ANC is guided by the principles of democracy, nonracialism and nonsexism, its current culture is infested with toxic battles for power, with greed and corruption being primary motivations for serving in Parliament.

When we delude ourselves that Ramaphosa will appoint a Cabinet of fine men and women with untainted reputations, we set ourselves up for disappointment.

When we expected him to introduce a lean, mean executive structure with far fewer ministers and deputies, as he had said he would, we failed to reckon with the politics and culture of his party.

When we expect chairs of parliamentary portfolio committees to be women and men of great standing, we are living in cloud-cuckoo-land, especially after we saw the party’s candidate list handed to Parliament before the elections.

When we expect him to fire Magashule, we are taking the ANC for granted and substituting our wishes for Ramaphosa’s agenda.

And when we overlook his mistakes because we want him to emerge and be strengthened, we are kicking the can further down the road, postponing the solving of problems that are already there.

In looking to Ramaphosa as a kind of saviour, are we not setting ourselves up for failure?

My fear is that those who portray him as the answer to all of South Africa’s problems – and spend time attacking his perceived enemies – will soon suffer an about-turn and turn against CR because he would have failed to meet their (unrealistic) expectations.

While hope has to spring eternal, investing such high hopes in one individual is unrealistic.

Now that he is president of the country, of course we should expect only the highest standards from him, but we voted for an ANC president.

It is the choice the majority made.

What are your expectations of our president? Do you think he has made any inroads against corruption?

Related Links
Ramaphosa’s words need to be translated into meaning for the hopeless
Jobs, land and electricity: Ramaphosa’s plan for economic rejuvenation
Mondli Makhanya: Let us kill this temptation to turn Ramaphosa into a god
Share
Next on City Press
WhatsApp stokvels: Liberalise informal banking sector to fuel growth