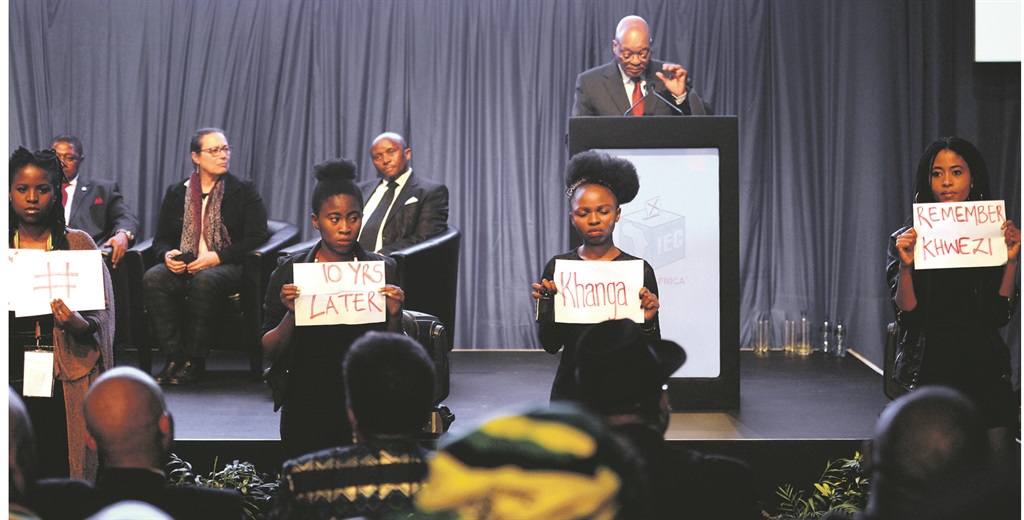 One of the four #RememberKhwezi activists, Simamkele Dlakavu, writes about the lessons learnt from last week’s silent protest, reaffirming her commitment to black feminist resistance

Our purpose was to remind him and the country that 10 years on, we recognise that he is in power.

Meanwhile, Khwezi, as gender justice movement the One in Nine Campaign has noted, is exiled for reporting that she was raped and for demanding justice.

Two weeks ago, at One in Nine’s exhibition and day of remembering 10 years of struggle and mourning, we sang, “Asiyifuni iagenda yamapatriarchs”, affirming that we do not want the agenda of patriarchs.

And One in Nine member Kwezilomso Mbandazayo said: “We can only survive white supremacist heteronormative patriarchy with each other, right? There is no other way to breathe.”

For the four of us, that is exactly how we were able to survive a week of threats, intimidation and many falsehoods. We experienced the pain, but also the beauty and wonder, of the practice of black feminist solidarity.

This past week has shown us two extremes of our current political discourse.

The one can be found in the misogynoir statements that we were “political pawns”, reflected in this tweet by Sports Minister Fikile Mbalula: “Women protesters used as tool [sic] to settle political scores between men. Utterly pathetic and grossly wrong.”

It can also be seen in statements by ANC Women’s League president Bathabile Dlamini, who said we were “tea girls for the Economic Freedom Fighters (EFF)”.

It is a party we support but had not included in our decision to protest. If fact, Tinyiko and I did not receive a press pass from the EFF, as had been reported.

Dlamini and Mbalula’s comments are insulting to many black women who survive on domestic work, for it also erases the important political role domestic workers have played in this country’s history.

Their statements ignore the structures of our political economy that place black women in positions where domestic work is the only avenue for economic survival.

Reducing us to “little girls” shows once again how some South Africans across both genders are invested in the infantilisation of black women and refuse to recognise our agency and political will.

The other extreme held us up as “heroes”, “leaders” who “sparked debate about Khwezi and rape”. These statements are also incorrect as they fall into the trap of individualising the struggle for gender justice.

In fact, they help to erase the work of black feminist activists and black women across South Africa, who have a long history of struggle and revolt against the system of white supremacist, capitalist and heteronormative patriarchy.

The media’s spin on the hero narrative is also anti-memory, failing to place our protest within a legacy of activism against patriarchal violence.

The same happened when Nompendulo Mkhatshwa, president of Wits University’s student representative council, was made the face of #FeesMustFall, despite it being a movement driven by the collective efforts of thousands of students.

Highlight black women’s leadership as a collective, because that leadership cannot be individualised. There were countless black women whose images were not shown who were organising meetings, crafting strategies and actions, organising legal assistance and making sure students were fed. Their work and effort were erased, and we refuse to let that happen with the IEC protest.

To paraphrase Maya Angelou’s poem, Our Grandmothers: Recognising the resistance of enslaved black women, we came as four but stood as 10 000.

We stand on the shoulders of a long lineage of black women doing the work of dismantling patriarchy and rape culture.

They encourage us and give us the vocabulary to affirm that naming and shaming rapists is a legitimate black feminist response to patriarchal violence. An entire genealogy of black feminist resistance allowed us to stand up in Pretoria last Saturday night.

What would have happened if black women did not unite to create the One in Nine Campaign? If black women at University of Cape Town had not called a rapist to account through #RapeAtAzania?

If women did not start the #RUReferenceList and organise at the university known as Rhodes?

If black women in townships and rural areas did not engage in mob justice as the only way to hold rapists to account when the law failed them?

And what would have happened if Professor Pumla Gqola had not written her book, Rape: A South African Nightmare? In it she writes: “We often place so much pressure on women to talk about rape, access counselling and get legal services to process rape, but very seldom do we talk about the rapists. We run the danger of speaking about rape as a perpetrator-less crime.”

Throughout the week, one message has stuck with me. It was a tweet from Amanda Charles: “I was too young to understand at the time … but now. Now. I believe Khwezi.”

Charles’ tweet is one of the reasons we all felt it was important to engage in that impromptu protest, regardless of fear and consequence. We hope that one day we will live in a society that believes black women when they say they have been raped.

We hope to live in a society free of rape. Until that society exists, we will continue to mobilise, protest and disrupt any space that seeks to perpetuate rape culture and erase women’s histories.

What should be done to rid society of rape and abuse of women?

SMS us on 35697 using the keyword KHWEZI. Please include your name and province. SMSes cost R1.50

We live in a world where facts and fiction get blurred
In times of uncertainty you need journalism you can trust. For 14 free days, you can have access to a world of in-depth analyses, investigative journalism, top opinions and a range of features. Journalism strengthens democracy. Invest in the future today. Thereafter you will be billed R75 per month. You can cancel anytime and if you cancel within 14 days you won't be billed.
Subscribe to News24
Related Links
Ghosts of Zuma’s past
Mapisa-Nqakula ‘shocked’ at security breach, but Zuma protest was peaceful
IEC proves its critics wrong
Next on City Press
How basic digital literacy can give rural youth a fighting chance in the 21st-century workplace