Given the media’s decision not to publish images of Reeva Steenkamp’s body, the question that arises is if the lives of black people such as Emmanuel Sithole – pictures of his body were published after he was killed in a xenophobic attack – matter less than white ones My father, like me, is a man of many words, which he often uses to recount mundane and remarkable events from his boyhood. One oft-repeated tale is usually told when we pass a dirt turnoff along the back roads to his village, Murewa, in Zimbabwe.

Pointing at the corner, he says animatedly: “I was on my school holiday. I was returning from the shops. That’s where I saw an army truck. The back of it opened and I got the fright of my life when I saw the bodies of Rhodesian soldiers. I was so scared that I ran all the way home.”

Home was not an unremarkable distance away. Nor was his sighting unremarkable. These were the dead bodies of young white Rhodesian men killed by “terrs”, the shorthand employed by white Rhodesia for the native “terrorists” bent on overtaking their beloved settler colony.

Years later, the remarkableness of this sighting of dead white men bears down even harder on me. My interest in the Second Chimurenga has dredged up countless images of disfigured and murdered black bodies, many of them published by the Rhodesian government.

Dead Terrorist Leaflet, the callous title given to the 1973 government-sponsored booklet, depicts three young black men lying dead on the ground. They had been shot and refused burial by the Rhodesian soldiers, a horrific desecration in Shona culture.

In this same booklet, there is a photo of six-and-a-half-month-old Natasha Glenny, who was bayoneted to death by 20 terrs. Government propagandists did not choose the image of her slashed dead white body. Instead, they commemorated her death with the image of her smiling and bubbly white baby face, full of life.

Ransacking my memories of newspaper and television news imagery, I find that in my nearly 25 years of existence I have never seen a dead white body, but countless dead black and brown bodies.

So indiscriminate are we about the dead bodies of black and brown people across the world, that the countless and varied photos have become generic stock imagery that media and government propagandists alike can mix and match with the exact message they want to convey: Dead liberation hero murdered by settler colonial government. Dead liberation hero murdered by rightwing white terrorist. Dead black workers shot by black government’s police. Dead and bludgeoned body of African strongman. Dead Middle Eastern refugee baby on Mediterranean beach.

And we can now see the death in almost real-time imagery: Dying African child, circled by vultures as s/he starves during famine. Dying young African-American man as white American police shoot him. Dying African of foreign descent as he is stabbed to death by fellow African of local descent.

As I recount this, I realise that memory has failed me. I do have my own remarkable sighting of a dead white body. It belongs to Reeva Steenkamp.

I jog my memory to remind myself of the afternoon in 2014 when I sat watching Oscar Pistorius’ trial on the office TV.

The case had gone on for so long, and consumed so much of my and my colleagues’ time, that I was not paying particular attention.

Part of the prosecution’s evidence, a close-up of her blood- and brain-splattered head was shown for the court and the world to see. Just as quickly as it appeared, it vanished.

The image of this dead white woman’s body is one that now only exists in collective memory, because the country’s (and the wider world’s) major media outlets have decided against publicising it – offering reasons varying from News24’s desire to “respect Reeva’s privacy” to eNCA’s “compliance with broadcasting codes”.

To get into the specifics of each media house’s justification would be to miss the point. It would deny the wider historical pattern.

If we are to historicise this pattern of publicised black death and privatised white death, I would like to return to the landscape of war, where this dichotomy is not always maintained – as was the case with my father’s boyhood sighting.

In particular, I am reminded of the various accounts I have read of black and brown colonial subjects enlisted to fight alongside their white colonial masters in the world wars.

An oft-reported observation centres on the fact that, out in the trenches, colonial subjects saw that their white masters were nothing like the God-figures they had made themselves out to be. They were mortal; they could die. Their bodies were fungible, just like the bodies of the colonised.

It was this experience of white mortality and death by black and brown soldiers that lifted the veil on the colonial inferiority-superiority complexes required to maintain white supremacist imperialism.

The psychological shift occasioned by the experience of white mortality was significant in the decolonial wave that swept the post-war world.

Perhaps it was this psychology that the Rhodesian government, one of the last colonial outposts, was aware of when it considered its propaganda efforts during the Second Chimurenga.

At this moment in our post-apartheid country, it is perhaps this very colonial logic that our white-dominated South African media maintains when it applauds the publishing of Mozambican national Emmanuel Sithole’s fatal stabbing in last year’s xenophobic attacks, and goes on to shun the publishing of Steenkamp’s fatal wounds.

Why we didn't show Steenkamp photos EWN is guided by an old maxim familiar to many journalists: just because we can, does not mean we should.

When Judge Thokozile Masipa lifted the ban on images of Reeva Steenkamp after she was murdered, our editorial team carefully weighed up the potential impact and relevance of publishing them. We debated whether it would take the story forward in any meaningful way, or give further context that we did not already have.

At best, the photographs of Steenkamp depict, in graphic detail, the devastating reality of a young woman’s murder – one that we believe has already been more than adequately described during extensive court testimony.

At worst, the pictures represent a form of voyeurism.

We also looked at what we had done in the past when presented with similarly gruesome photographs, because in our role as journalists, devastating pictures are nothing new. We see and take such pictures all the time, but quick, ethical and informed decisions need to be made constantly.

Just recently we chose not to publish pictures of the charred bodies of two men burnt to death in housing protests in Hammanskraal, near Pretoria.

They were disturbing images of two lives cut violently short, their corpses left on the ground for all to see. Reeva Steenkamp’s casket arrives in Port Elizabeth ahead of her funeral. After her death, only photos of her when she was alive were used by the media. Picture: Schalk van Zuydam 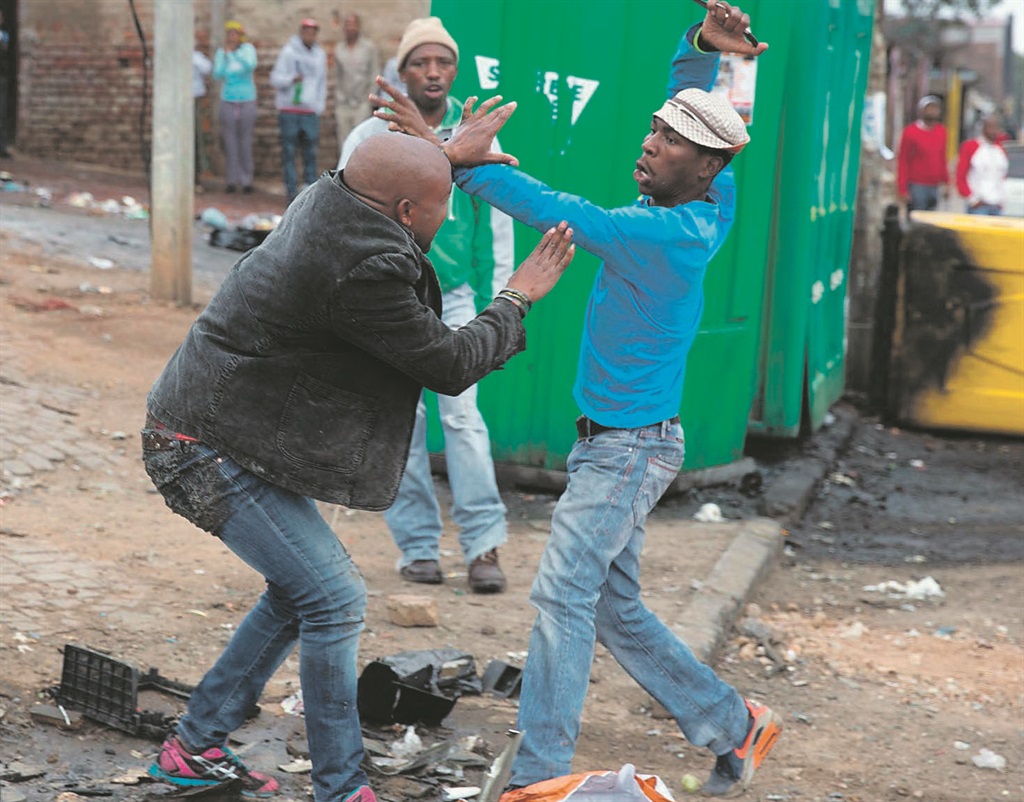 We told these men’s stories, we covered the protests in depth. But the publication of the pictures would not have provided our audiences with significantly more knowledge or understanding.

Ultimately, we say no to gratuitous, unnecessarily disturbing images and try to choose wisely about what we will show, while never censoring ourselves – giving the full picture and allowing our audience to get inside the truth of a story.

We also learn and evolve along the way and are conscious that we do not always get it right.

Our decisions are guided by the Press Council of SA’s code of ethics and conduct, which dictates that violent content should be avoided, “unless the public interest dictates otherwise”. While adhering to this code, we always strive to balance the journalistic principles of minimising harm and reporting truth.

We are acutely aware that what is in the public interest is often different to what the public is interested in.

Katopodis is the editor in chief of EWN

Have you seen images of black or white people, either dying or lying dead, published in the media?

SMS us on 35697 using the keyword DEAD and tell us what you think. Please include your name and province. SMSes cost R1.50

We live in a world where facts and fiction get blurred
In times of uncertainty you need journalism you can trust. For 14 free days, you can have access to a world of in-depth analyses, investigative journalism, top opinions and a range of features. Journalism strengthens democracy. Invest in the future today. Thereafter you will be billed R75 per month. You can cancel anytime and if you cancel within 14 days you won't be billed.
Subscribe to News24
Next on City Press
Book Extract | What happens when love is an addiction?