Richard Maponya: A giant in Africa Richard Maponya and his wife Marina.

A man of hard work, tenacity and integrity, Ntate Maponya had a big heart for SA’s democratic order and economic prosperity, but little tolerance for entitlement, writes Tebogo Khaas.

A democratic, egalitarian society that ignores such insidious socioeconomic traits does so at its own peril.

The late doyen of black business, Richard Maponya, whose towering entrepreneurial shadow will be hard to escape, demonstrated through his exemplary life teachings that business success, social entrepreneurship and ethical business leadership are not mutually exclusive economic philosophies.

Maponya’s demise should serve as an inflection point in our quest for black economic emancipation, particularly the advancement of black business participation in the mainstream economy. This will not only help us realise our economic ideals, but also serve to recalibrate those seeking to curate and advance his legacy.

An underdog who vanquished the seemingly insurmountable apartheid beast, Maponya’s business exploits and achievements are living proof that hard work, tenacity and integrity are non-negotiable elements to continued business success.

As South Africans mourn his death, it would perhaps be prudent to invoke former president Thabo Mbeki’s words: “The pursuit of excellence, even by those considered underdogs, can triumph over the seemingly insurmountable.”

It is in this context – of the hostile political environment that prevailed at the time Ntate Maponya risked the security of a potentially rewarding career as a qualified teacher and later as a salesperson to establish his business empire – that a judicious assessment of Maponya’s legacy must be considered.

When he ventured into business, a plethora of apartheid laws regulated, inter alia, black people’s movement, areas where they could conduct business and the types of businesses they could establish, including the days and hours such businesses could operate.

Notwithstanding such legislated adversity, Maponya succeeded beyond measure and became the epitome of black business excellence. His success in life served a medley of positive societal values, which he selflessly imbued in others long before the term “social entrepreneurship” was coined. 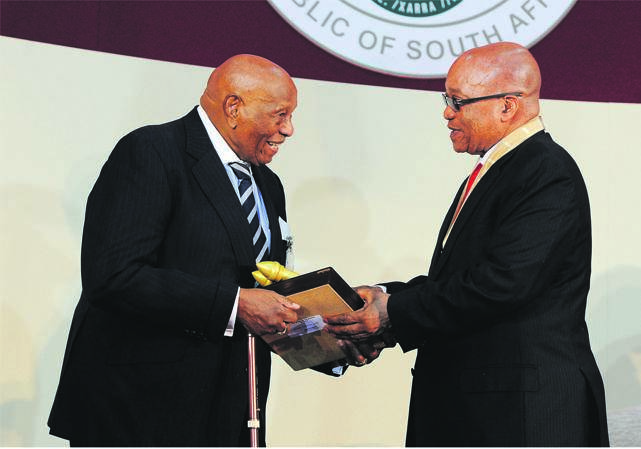 As a youngster growing up in the dusty streets of Dube, Soweto, in the 1970s, the mere invocation of Maponya’s name filled many a heart with pride and hope in the midst of wanton economic despair.

His sartorial elegance, vast fortunes, investments in the local township economy, affluent lifestyle and empathy towards the less fortunate served as an inspiration to my generation, and an envy to some.

Despite his immense business success, accolades and status, Maponya never ceased to identify with the plight of the black community. His commitment to uplifting black business in general, and the Soweto community in particular, is unparalleled.

But, despite his affable character and readiness to lend an ear, Ntate Maponya did not suffer fools gladly.

I recall an incident in 2011 when I approached him for counsel regarding a business matter I was invited to mediate. The discord arose out of a reasonable apprehension on the part of some black fast-moving consumer goods distributors, who were members of the SA SMME Forum – which was dedicated to accelerating sustainable development for small, micro and medium-sized enterprises (SMMEs) in the country – and had concerns regarding the potential negative impact America’s Walmart merger acquisition of South Africa’s Massmart would have on their businesses.

It was correctly anticipated at the time that Procter & Gamble (P&G) – Walmart’s global supplier of retail goods, which had been using black distributors to supply Massmart – would abandon them in favour of an established Israeli distribution company with whom P&G had a global distributor agreement.

Although sympathetic to the plight of affected black distributors, Maponya took a dim view of the pervasive culture of entitlement, unbridled greed, flouting of basic business principles and poor corporate governance practices by some of the errant black distributors. These entrepreneurs abused P&G’s favourable trading terms and some were hopelessly in arrears, remitting tens of millions in payments due to P&G.

Later on, as chair of the Massmart-Walmart supplier development advisory board, I had the privilege of engaging Maponya on ways to help accelerate the participation of SMMEs in the retail supply chain of Massmart, Walmart and other retailers. This was pursuant to a condition imposed by the Competition Appeal Court on the merger.

Maponya provided valuable insights into the opportunities and inherent challenges faced by emerging black retailers in this ever-changing, globalised and technology-driven retail industry. Of course, Maponya’s successful construction of Maponya Mall in Soweto attracted a substantial amount of unfair criticism. Some pundits argued then that Maponya tacitly helped displace local traders for the benefit of white-owned retailers and their suppliers.

They pointed to the mall’s tenant mix, which is still overwhelmingly white, without fully appreciating or acknowledging the vagaries of global economic arbitrage.

Pertinently, such criticism failed to consider that government, advocacy bodies, black associations and executives overlooked the exigent need to strategise on how best to take advantage of the opportunities presented by the entry of established retailers into predominantly black townships, including interventions such as a R240 million Massmart-Walmart supplier development fund and other transformative instruments.

Sadly, the prevailing culture of black entitlement and insolence, on the one hand, and big business intransigence to reform meaningfully, on the other hand, have helped assure the rapid displacement of black traders in townships by foreign nationals and big local retailers.

While he lamented such displacement, Maponya’s public pronouncements on this subject have been widely misinterpreted to underscore an aversion to the participation of foreign retailers in the township economy.

In spite of his middle name, Pelwana (meaning small heart), Maponya had a big heart for South Africa’s democratic order and economic prosperity. It was in recognition of his big heart that, in 2007, the South African SMME Forum conferred on him a lifetime entrepreneurship award.

I cannot think of a black businessperson who has made a greater lasting contribution to local entrepreneurship and society in South Africa than Maponya did. An underdog who vanquished the seemingly insurmountable apartheid beast, Maponya’s business exploits and achievements are living proof that hard work, tenacity and integrity are non-negotiable elements to continued business success.

He fully appreciated that extremes of inequality give rise to serious moral and economic risks.

I therefore challenge organised business and government to find a fitting symbol to immortalise the legacy of Ntate Maponya. May his soul, and those of the dearly departed, find and rest in eternal peace.

Related Links
Richard Maponya taught us to be captains of our destiny – Herman Mashaba
Tributes pour in for Dr Maponya, ‘Grandfather of black business’
Richard Maponya – The trailblazing tycoon
Share
Next on City Press
Mondli Makhanya: Can the ANC’s rot be arrested?