SA is gone, my countrymen 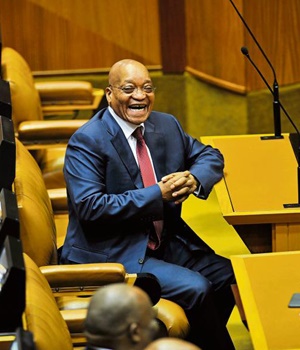 President Jacob Zuma in Parliament. The writer says Zuma’s actions have made SA the laughing stock of the world PHOTO: Lerato Maduna

As Zuma rapidly takes SA downhill, it is time for someone to say enough is enough. But who is going to stop the rot, asks Xolela Mangcu

We have become a rudderless country. Our nation is careening downhill in a hand basket because the man at the helm, President Jacob Zuma, is not qualified to lead it.

Every day he takes us deeper into what racist author Joseph Conrad called the “heart of darkness”.

Racist whites celebrate because they could not have been better vindicated, forgetting that this man portends all of our destruction. They insult us by his name. “You deserve Zuma because you are no better than him, and him no better than you,” they say. And we are left speechless in response because there is a ring of truth to what they’re saying.

With black leaders like him, who needs white racists? We have become the laughing stock of the world. All our protestations about Zuma notwithstanding, we seem spellbound by him, ashamed, but not ashamed enough to say: “Enough!”

Sometimes I wonder if we deserve this democracy, or are even worthy of it. How can we be worthy of democracy if one person can do as he pleases with our institutions and resources?

The endless appointments of unqualified people to lead our strategic institutions and the milking of these institutions by private profiteers close to the president give a lie to the notion of democracy in this country.

We are no different to any other kleptocracy. The sooner we drop the pretence the better, so we might better understand the nature of the beast that lies at the head of our government.

The greater shame is that the ANC, the one party that could have stopped him, has become like him. Like Zuma, its members also think the party and the patronage it brings come before the country. And so the ANC is dead as a living organism. What remains is its skeletal frame.

It is this skeletal understanding of public duty that Zuma brings to the presidency, which also leads his spokespersons to argue that he can do whatever he wants with his Cabinet. Not so fast, I say. If this was the case, we would be no different from Robert Mugabe’s Zimbabwe.

Well, maybe we are not that different. We’re a democracy only in frame. Each time Zuma transgresses our most sacred values, I think he cannot possibly do worse. And then, as if calling our bluff, he does the unimaginable.

To sack Minister of Finance Nhlanhla Nene because he clashed with a woman who has no business heading SAA would be shocking if this was not a Zuma government. This has become our reality, our identity.

To be sure, this systematic assault on our institutions started under Thabo Mbeki and we have him to thank for plucking Zuma from KwaZulu-Natal into the second-highest office in the land, thinking he would not be a problem because he was not educated.

And it was us writers who foolishly cheered on as Zuma replaced Mbeki because we did not know what his appointment portended.

In article after article, I asked if these two men were the sum total of our talents in the black community. Now only one of them is left standing and the question comes into sharper relief: Is Zuma the best that we can be?

White people seem to think so and we seem to confirm it by our inaction.

There has been enough foolishness to go around over the past 20 years. The question is when and who will stop the foolishness if we are to give our children a small chance of inheriting a working country?

The difference between Mbeki and Zuma is that the latter has no shame, none whatsoever.

Because he is unqualified to lead this country, Zuma appoints unqualified people to lead our public institutions.

So we have an individual without matric running our public broadcaster; a police commissioner with no background in policing and under whose watch 34 mine workers were killed in Marikana; endless heads of the National Prosecuting Authority whose names I cannot recall because of the rapidity of their replacements; countless CEOs of SAA, which is now being run by a woman who has no business being at its helm and whose wrath seems to have cost Nene his job.

Have you ever heard of something like this in the civilised world, other than in places where state decisions are made to satisfy private interests.

Cabinet appointments are made in the private home of foreigners who have members of the president’s family on their payroll. This is lumpen governance of the worst kind.

The question is who will correct it and when? The worst offenders are the opposition parties, who are no different from Zuma in putting their parties before the country. Do they also think their parties – and whatever patronage comes with their leadership of them – come before the country? Is it not time they put their heads together and put the country above everything else?

Maybe young people working across party lines are still our best bet. But it will all start by recognising, to paraphrase
19th-century poet Isaac Wauchope, that the country is gone, my countrymen.

This time it is not gone to the colonisers, but to one man and one man only, as we all sit idly by and watch. What a travesty.

Why is President Jacob Zuma allowed to ruin the country without any consequences?

SMS your thoughts to 35697 using the keyword ZUMA. SMSes cost R1.50. Please include your name and province