Vusi Memela sits and waits his turn to have his bags weighed. Picture: Alet Pretorius

Every morning, while most of us are still fast asleep, a waste economy awakens on the streets of the City of Gold. Charlea Sieberhagen spoke to Joburg’s dustbin scrapers, rubbish collectors, recyclers and retrievers about their hopes and dreams

They form a neon-yellow line in a big warehouse filled with rubbish.

Patiently, they stand in a queue, each waiting to have their bag weighed. Here and there, someone attempts to strike up a chat, but most just stare into space, hands clasped together, while the cacophony reverberates around them.

Glass breaks, a conveyer rumbles and cardboard boxes are moved up the incline with a groan. The shrill beep-beep-beep of a reversing truck and the thump of masses of newspapers being thrown on to a pile echoes through the dark warehouse. In places, streaks of sunlight find their way through the corrugated iron roof.

“Jesus loves you too,” shout the thick black letters on the back of one of the neon jackets.

Dingani Dlamini, in his black New York Yankees cap, black T-shirt, and short beard and moustache, says he knows this game by now.

“I didn’t have a job. I had to choose: recycle or rob people,” he says, keeping a close watch on what I write, his black shoes dirty and worn out.

Some of the other people here are also unsure of their age.

The crudely assembled cart he had bought for R100 leans against the pavement. His big rubbish bag is overturned, empty, because he has just delivered his collection of cardboard boxes to the recycling centre in Newtown in the heart of Johannesburg.

He is R62 richer for a load of between 200kg and 300kg of carton that he had collected during the week and had hauled tens of kilometres.

“I’m from far away,” he says, and slowly spells the name of his rural birthplace in North West: “Knotonotwana.”

Now he lives here, in Johannesburg’s city centre, close to the recycling centre. “Just around the corner here,” he motions down the street.

Three years ago, Dingani decided to buy a cart, take a bag and scour the streets of Johannesburg for plastic, glass, carton and any other recyclable materials that could make him some money.

“Eish. I didn’t have work. I used to be a chef,” he says and laughs self-consciously.

He hangs his head and uses his arm to wipe the sweat from his face, laughs uncomfortably – his teeth as white as the letters NY on his cap.

“But I don’t want to talk about that. Rather ask me other questions. Not about where I worked.”

Yes, he is a qualified chef with a matric certificate and various courses to his name, he says – “everything to do with hotels and restaurants”.

Trucks in the street and the clanging glass bottles in the recycling centre make a din.

Dingani is destitute and sleeps in the vicinity of the Nelson Mandela Bridge in Braamfontein.

He tries to deliver a bag of recyclable material to the centre four times a month, at least once a week.

Some bags he leaves in certain places and collects when he has filled them – like outside a popular bar in Braamfontein, where, hopefully, people’s empty bottles will end up in his bag.

“I also don’t sell it [his materials] every day because I have to leave the bags until they are full. I look for things in Hillbrow, Newtown, Mayfair, Auckland Park and Parktown.”

Asked how far he walks, a big smile comes over his face.

“Oh-oh-oh!” he says, shaking his head and shrugging his shoulders.

If he is lucky, he finds a small treasure hidden in other people’s rubbish – such as the laptop discovered the other day. “I sold it for R1 200. It was in working condition, but the screen had a small crack in the corner.”

For the guys with the trolleys, it is mostly every man for himself. “It is not very competitive and we help each other, like when someone’s trolley gets stuck. You can’t say this is your territory. If someone is busy at a dustbin, you move on to the next one.”

In the early mornings, they venture into Johannesburg’s quiet streets in groups, with caps, balaclavas and dirty gloves.

Under the streetlights, the roads become theirs for a few hours. Then they walk the uphill roads and ride their carts downhill – steering their trolleys with their legs like surfers, holding on to the handles made from ironing board legs.

“You get tired and don’t get a lot of rest. But you must not sit down. You have to keep on moving.”

When one of Dingani’s six bags is full, he drags his trolley through the impatient urban traffic, back to the recycling centre. He wears a neon-yellow jacket to be visible to the dump trucks. Then he goes to the back of the queue for his haul to be weighed. Smangele Ndlovu is the woman who does this every day, her short Rasta locks covered by a headband. She has a manic laugh.

A damp decay clings to everything, fermenting the air like sour milk. It is as if you can see the dirt in the air, taste it in your mouth. But the neon line stands and waits patiently.

After queuing, Dingani weaves his way through the noisy trucks, throws his plastic bottles on the plate for plastic, his paper on the paper pile and his carton on the carton pile.

He fetches the shred of paper declaring how much money he should receive. Then he goes to another queue to get a note or two from a black-painted window.

White paper, cardboard boxes, white plastic milk bottles and PPC (thick plastic) are very valuable. White paper can earn you about R2.10 a kilogram, carton about 56c a kilogram and green glass bottles about R1 a kilogram (there are considerable price differences from place to place and they can change daily).

Dingani uses his money for food, sometimes on clothes, but most of it goes home to North West, to his “wife and child”.

“It’s my dream to have my own business. I would have liked to open my own restaurant. I want to start saving this year. Maybe I can start here with a small shop. Maybe it becomes bigger, slowly but surely,” Dingani dreams before saying goodbye and pushing his trolley down the street.

WARES FOR SALE Vusi Memela sits and waits his turn to have his bags weighed. Picture: Alet Pretorius 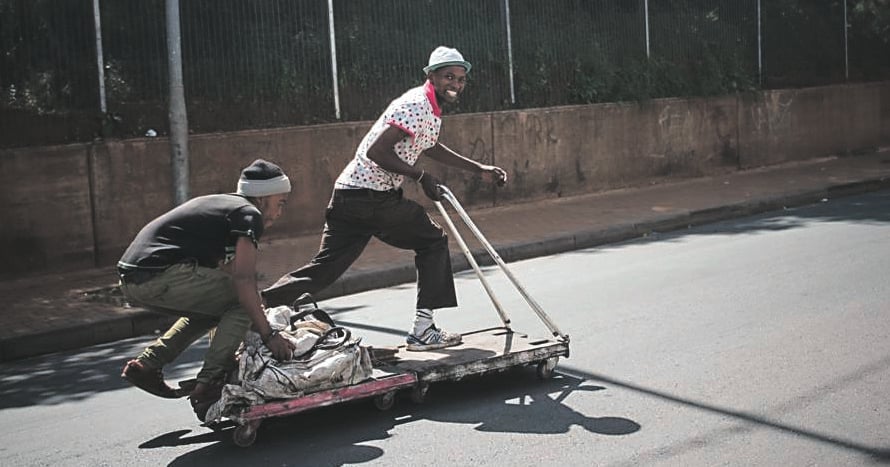 road warriors Lesiba Lethaba uses his cart like a scooter and rides the downhills while using his legs to steer the trolley. Dumelo Makoetge decided to ride along taking the load off Lesiba Lethaba weighs his cardboard boxes at the recycling centre in Newtown in Joburg’s city centre PHOTOs: alet pretorius Vusi Memela (28) emerges from the recycling centre. He frowns behind the thick-frame glasses he fished out of a dustbin somewhere, as he starts telling his story on the pavement across the street.

He has been an informal recycler for eight years. Before collecting recyclables, he worked as a security guard for two years. “But eish, I just couldn’t take it any more. It was long hours and the pay was too little,” he says, shaking his head.

He is restless, his eyes darting from left to right. His white T-shirt has been worn to pieces.

Still, there are days he pockets only R60. “There are too many of us now and it gets difficult if you have a heavy load and you come from far away, like from Rosebank.”

He greets someone across the street with a nod. The guy yells something over the noise, but it is inaudible. They may not all be friends, but they know of each other, he says.

The heavy traffic does not concern Vusi. “I think people understand. Sometimes they do. They wait for you and when there’s a chance to go past, they go past you.”

He left school when he was in Grade 11, he says.

He turns away and shakes his head before continuing. “The finances at my house were not very good. There were five of us, so my parents couldn’t afford for me to finish school. I would have liked to finish school.”

He would also like to get a learner’s licence so that he can learn to drive. “All those things cost a lot of money. But it is one of the things I would like to do.

The little money he earns day to day he uses for “things to bath with”, for food, and, once in a while, for some clothes.

“But we get a lot of our clothes in the dustbins.”

Vusi has also found spent ammunition cartridges in dustbins. “I wonder what people do with them. There are guys who have found firearms. I haven’t. I have only found the cartridges. You find them all the time.”

Sometimes, he says, people leave cash on top of their rubbish bags. He has found gold jewellery mixed in with all the scrap.

Most mornings, Vusi gets up at 2am to start his search for recyclable materials, before the dumptrucks start their rounds. After he has weighed in later in the day, he goes to sleep in a small, corrugated iron house on an empty stand close to the recycling centre.

“Some days I am just tired. Very tired,” he says.

He also has plans, and stays quiet for a moment, staring again at the busy street in front of the recycling centre.

“I see myself away from this place. With a good job. That is my big dream – to do a job and at the end of the month get a cheque that makes me smile.

“I would like to be an engineer. I want to fix things. I like to fix things,” Vusi says, before jumping on his cart again – his surfboard – to ride it back to the bridge, through Johannesburg’s dust and rubble.

We live in a world where facts and fiction get blurred
In times of uncertainty you need journalism you can trust. For 14 free days, you can have access to a world of in-depth analyses, investigative journalism, top opinions and a range of features. Journalism strengthens democracy. Invest in the future today. Thereafter you will be billed R75 per month. You can cancel anytime and if you cancel within 14 days you won't be billed.
Subscribe to News24
Related Links
From trash to cash, at just 22
Next on City Press
Who really cares about being called a high-value woman?