Who are the Stellenbosch Mafia? 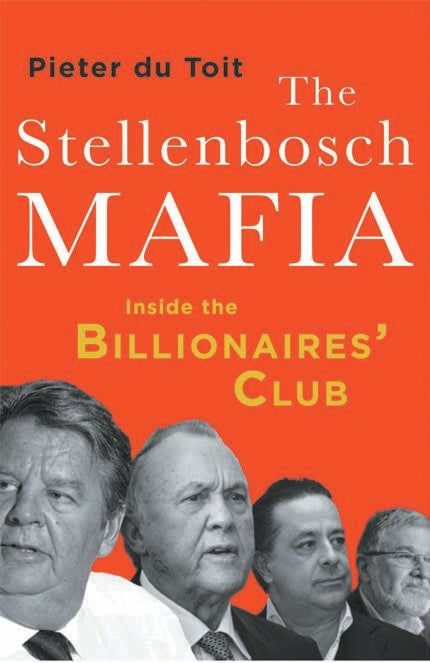 In his latest book, political journalist Pieter du Toit explores the roots of Stellenbosch, and closely examines its ‘club’ of billionaires.

Who are they and, crucially, how are they connected? What network of boardroom membership, alliances and family connections exists?

Who are the ‘old guard’ and who are the ‘inkommers’, and what about the youngsters desperate to make their mark?

The Stellenbosch Mafia – Inside the Billionaires’ Club

Anton Rupert was a product of his era.

He was born in a time of political tumult when Afrikaners were starting to embark on the apartheid project driven by the fanning of nationalist sentiment in the first decades after the South African War.

He was consumed by his people’s plight and took advantage of the environment created by the ascendancy of Afrikaner politicians in the 1930s and 1940s to build a multibillion-rand empire.

This is clearly illustrated by the fact that influential and politically connected Afrikaners of the time were intimately involved in the early days of [industrial conglomerate] Rembrandt and acted as mentors for the young upstart.

Rupert also played a significant role in the broader social and political movement to uplift Afrikaners.

He wasn’t entirely convinced by universal franchise, and in the 1960s explained as much in a speech in the US, in which – in the era of uhuru, African independence and the civil-rights movement – he warned against “one man, one vote, once”.

He reportedly argued that before the extension of voting rights to non-whites could occur, social and economic development should be on a sound footing. Without those foundations, he believed, democracy could not survive.

In 1978 he repeated this theme in a speech in Maseru, Lesotho, when in his prepared remarks he reiterated that too much emphasis was placed on “one man, one vote”, instead of “one man, one job”.

He was warned beforehand that this would not be well received and decided to leave it out, but by then the written text had been distributed.

It seems, however, that Rupert, even though he benefited from the statutory and governance framework constructed by the policies of separate development, was never an apartheid ideologue.

I wanted to meet [black consciousness leader Steve Biko] and talk about his convictions and beliefs. I told him that if I were a black man I would also be a Pan-Africanist, I would also be a member of the PAC, not the ANC. We agreed that there could be no peace in the country unless there was a deal between white nationalists and black nationalists.

His biographer argues that Rupert had come to understand as early as 1947 that racial segregation could not be the long-term solution to the country’s social and developmental problems.

Rupert and Rembrandt’s business philosophy of mutually beneficial partnerships also seemed to stem from his political views, in that although he apparently wasn’t wholeheartedly committed to liberal democracy for a long period of time, he did understand that the subjugation of an entire people would destroy both business and society.

He clearly had an antipathy to Hendrik Verwoerd and, according to an interview with his biographer, believed the Dutch-born hard-line apartheid premier to be “the same kind of catastrophic outsider that Adolf Hitler had been to the Germans”.

In 1966 he was interviewed by journalist Allen Drury in Stellenbosch and said that the fortunes of white and black people in South Africa were interwoven, that “if the African doesn’t eat, we don’t sleep … if he doesn’t succeed, we won’t; and if we don’t succeed, he won’t”.

But, could Rupert – and Rembrandt – have done more to expedite the end of apartheid? Yes, Rupert’s son Johann believes.

Johann Rupert had always considered himself an opponent of apartheid and was ejected from officers’ training in the navy during his military conscription when it came to light that he had taken part in producing an anti-apartheid edition of the student newspaper at Stellenbosch University.

“After we published the newspaper, the Cape Times ran a front page headline: ‘Anton Rupert’s son turns against apartheid’,” he recalls.

That was in October 1970. In 1973 he struck up a relationship with black consciousness leader Steve Biko.

“Biko was in Stellenbosch to attend a conference of the South African Students’ Organisation. I wanted to meet him and talk about his convictions and beliefs. We met one day and we continued talking until very late. Johann Rupert, South African businessman and son of Dr Anton Rupert, has taken over the day-to-day running of the South African conglomerate Rembrandt.

Rupert’s dislike of politicians and the apartheid government intensified during the time he worked at Chase Manhattan Bank in 1974.

David Rockefeller called him into his office one day to ask what was happening on the border between South West Africa and Angola.

“Did the [South African] army invade Angola?” he asked.

To find out what the situation was, Rupert called his father, who, in turn, asked Hilgard Muller, then minister of foreign affairs. Muller assured Anton Rupert that South Africa was not “in” Angola.

When he relayed the message to his son, so that he could pacify Rockefeller (Chase Manhattan was one of South Africa’s largest creditors), Johann Rupert said, “But, Dad, looking at the images on television here, it sure looks like we are. I know what our soldiers and armaments look like.”

“I didn’t know black people when I was young and living in Stellenbosch – back then, there were something like 10 000 black people in the whole of the Western Cape. I became an opponent of apartheid because of what the government did to coloured people.

“I never went to the Transvaal, but I did see what the Group Areas Act was doing in Stellenbosch, where it forced out all the coloured inhabitants of Andringa Street.

“Trevor Manuel’s surrogate father used to live there. He used to do plumbing work for my mother, and always bought her tea,” he says.

“Apartheid was an immoral system, and I told PW Botha as much when they moved on District Six.”

When Rupert returned from his stint in international banking in 1979, he settled in Johannesburg and launched Rand Merchant Bank.

He had struck up a friendship with Brian Gule, a black South African studying in New York, and they decided to test the regulatory environment back home by starting a joint venture.

“We opened a hair salon in the Carlton Centre, Black Wave, because back then there were no black hair salons in the city. And when we opened our doors, it was the only black business in the whole of Johannesburg.

“But then the Group Areas Act came looking for us. Because we were in a partnership, the property owners of our premises, Anglo American, were good to us. They said they couldn’t eject us purely on the basis of the law. The clientele we drew were the young black professionals of the time: doctors and their wives, for example.”

He tells of his visits to Soweto with a black friend, Lucky Michaels, who introduced him to the Pelican Jazz Club.

“I went there on Fridays to listen to jazz … up until 1983, at which point Lucky told me it was becoming too dangerous.”

The black community increasingly asked Rupert for loans from Rand Merchant Bank to start businesses, but because of the nature of merchant banking he couldn’t help.

“We said: ‘Boys, this is a problem. Something major is wrong. What can a black guy do when he wants to start a business? What options does a black entrepreneur have?’

“I thought of my black friends in New York – guys like Reggie Jackson and Ahmad Rashad – and I thought, ‘Nee, donner, so kan dit nie werk nie. (No, darn it, it cannot work like that.)’”

Rupert approached his father and persuaded him to provide capital, so they could buy industrial properties around Johannesburg, close to the townships, and give 99-year leases to aspiring black businessmen.

“This enabled them to borrow from banks. Black people could not hold title deeds – they couldn’t even own their homes, so they couldn’t start building up capital. We started the Small Business Development Corporation and one of the first properties we bought was Basil Landau’s old Leyland factory.”

Then they issued leases and the state couldn’t do anything about it, he explained.

“Part of the first round of leases was issued to a group who repaired taxis, and I became friendly with them, and I still am to this day. They remember what we did to help them back then.

“We created 70 000 jobs through the Small Business Development Corporation, and all that they needed was title deeds. Do you have any idea how creative you had to be when you were a black entrepreneur without capital? They traded on their wits because they had no assets against which they could borrow, but they were natural businessmen.”

We live in a world where facts and fiction get blurred
In times of uncertainty you need journalism you can trust. For only R75 per month, you have access to a world of in-depth analyses, investigative journalism, top opinions and a range of features. Journalism strengthens democracy. Invest in the future today.
Subscribe to News24
Related Links
Pressing Issues: Johann Rupert joins SA’s football elite
Johann Rupert’s golf estate disputes R1.3bn valuation in fight over rates bill
Floyd Shivambu and the Stellies Mafia
Next on City Press
Mondli Makhanya | Return separatists to the fringe