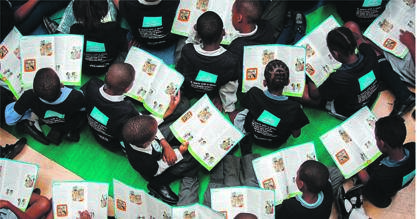 The story came to me as soon as I decided to write it in Setswana, writes Lorato Trok.

In the small Northern Cape town of Kuruman, my beloved mother, who had a Grade 6 education and spoke very little English, was a master storyteller and gave Setswana oral narratives – ditlhamane – to her six children every night, without fail.

Growing up in townships and rural towns in the 1980s and early 1990s, with the inherent lack of resources and with political instability, my family was like many others – we improvised a lot to entertain ourselves.

While my mother was a skilled narrator, my aunt was a gifted actress and she would perform her stories when it was her turn to keep us entertained.

All this was done in my mother tongue, Setswana, and I have been hooked on stories ever since.

We may have lacked physical books, but these oral stories were good enough to make me understand the power stories hold for a curious child.

Whenever authors are commissioned to write stories in South Africa, the default language used is English, and then the story is translated into an African language.

That was my first thought when I was commissioned to write the official story for Nal’ibali’s 2020 World Read Aloud Day celebration.

My brain went into overdrive trying to come up with a story that would not only be interesting, but also affirm the African child from beginning to end.

Only a week before I was due to send the story in did a light bulb flash in my mind.

The story came to me as soon as I decided I would write it in Setswana and translate it into English.

How I had underestimated the power of my own language!

Among the benefits of reading aloud to your children are that it gives you things to talk about, and builds a bond between parent/caregiver and child.

What better way to build a bond and have things to talk about than to do this in the language that you express yourself best in?

We live in a multicultural, multilingual country, with English constituting only 8.3% of home language speakers, Afrikaans 12.1% and Setswana 8.8%, according to Stats SA’s Community Survey in 2016. At 24.6%, isiZulu is the most common home language.

This means that more than 80% of the South African population’s home language is neither English nor Afrikaans – languages in which the majority of literature is published, including books for children.

Nal’ibali vigorously promotes and advocates that children and their caregivers enjoy stories in their home languages.

. Trok is an early literacy consultant and expert in developing reading-for-pleasure books for young children, especially in African languages.

She has experience in publishing, writing and story development of children’s literature.

Take part in Nal’ibali’s World Read Aloud Day celebration on February 5, visit nalibali.org to download a copy of this year’s special story in any official South African language and register your read-aloud session.

You’ll be joining thousands of adults across the country who are standing up for literacy.

We live in a world where facts and fiction get blurred
In times of uncertainty you need journalism you can trust. For only R75 per month, you have access to a world of in-depth analyses, investigative journalism, top opinions and a range of features. Journalism strengthens democracy. Invest in the future today.
Subscribe to News24
Related Links
Bolo: A reading app for the literacy gap in SA
Editorial: The ANC must back off and let the SABC be
Let’s create a habit of reading for pleasure
Next on City Press
Local government in South Africa is broken: but giving the job to residents carries risks

Read more on:
languagesreading
Podcasts
Podcast | How to select the right exchange traded funds in this crazy market