Alcohol-free cider has ... wait for it ... alcohol 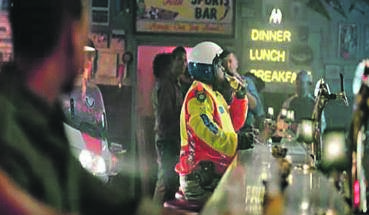 And while producer Distell may technically call it a non-alcoholic beverage as it contains only 0.3% alcohol, the Advertising Regulatory Board (ARB) has found Savanna’s advertising for the beverage to be misleading.

Two complainants, Mpho Lephalala and Bongani Mdletshe, approached the ARB, saying the TV advert – in which a traffic officer and an aeroplane pilot are seen drinking “non-alcoholic Savanna” – was misleading.

The ad shows two friends drinking in a bar. Then a traffic officer in a uniform rides into the bar on a motorcycle and drinks a non-alcoholic Savanna, before riding out to continue with his work. One friend looks at the other and says: “That’s a bit unconventional.” The other answers: “Hm. Savanna with no alcohol. It breaks all the rules.”

They then look around and see a pilot in uniform drinking the same “non-alcoholic drink”. The words “not for sale to persons under 18” appear at the bottom of the screen throughout. The last shot contains the words: “New non-alcoholic. The rules don’t apply.”

The ARB says the rules do apply and has agreed with the complainants that the ad is misleading.

In arguing its case to the board, Savanna said an average person would need to drink about 20.3 litres of its so-called non-alcoholic drink to exceed the legal alcohol limit for drunk driving. Any drink containing less than 0.5% alcohol is considered “non-alcoholic” by law.

Savanna said it had included the age warning intentionally to ensure that it advertised the drink responsibly and did not make the brand sound appealing to children.

Any drink containing less than 0.5% alcohol is considered “non-alcoholic” by law

The ARB expressed concern about people who do not drink alcohol or are not allowed to imbibe it for medical or religious reasons, saying: “The fact that the drink would not make them drunk would not matter to them.”

The claim was misleading, the ARB found – a situation made worse because it is a TV ad.

“Viewers do not have the luxury of studying the packaging for clarity until they respond to the advert and go to the liquor store. By then – even if they choose not to buy the product – they have been misled.”

The ARB could not rule against Savanna’s name for the product, but objected to the nature of the claim that it “does not contain any alcohol”. Savanna will have to amend the ad as soon as possible.

We live in a world where facts and fiction get blurred
In times of uncertainty you need journalism you can trust. For only R75 per month, you have access to a world of in-depth analyses, investigative journalism, top opinions and a range of features. Journalism strengthens democracy. Invest in the future today.
Subscribe to News24
Related Links
Who am I without a glass of wine?
On my radar: Phuza Thursdays, without the phuza
Football player car crashes: Alcohol main cause for lack of insurance payouts
Next on City Press
Mboweni’s budget fallout

Read more on:
alcohol
Podcasts
Podcast | How to select the right exchange traded funds in this crazy market