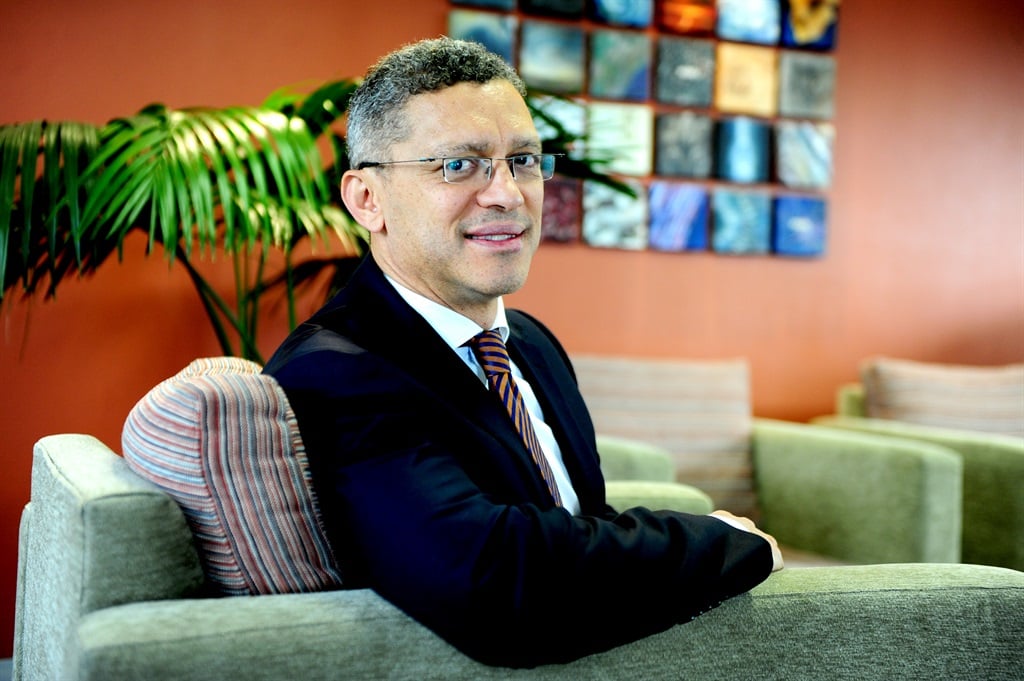 Leslie Maasdorp at his office in Sandton. Picture: Muntu Vikakazi

The New Development Bank was hoping to get an international credit rating from the three of the major credit rating agencies by the end of this year.

“The rating is likely to come through in the next quarter and if not that then definitely before the end of the year,” the bank’s chief financial officer Leslie Maasdorp said during an interview last week.

This would enable the bank to raise hard currency like US dollars and issue bonds internationally,” he said at the sidelines of the 10th Brics summit held in Sandton.

After receiving its international rating, the bank would look to issue bonds in the South African market and these bonds would be denominated in rand.

“The bank, because of its strong capitalisation, is likely to get a very senior grade rating. That would mean our costs of funding will be lower than commercial banks will be able to raise funding for.”

“The bank in all likelihood will receive a senior investment grade rating, which will enable it to raise money cheaper than will be attainable in the market.”

The Brics bank this week announced it would enter the arena of private sector lending after focusing on lending to its five member governments and their parastals since it was formed in 2015.

“The next big thing is that we will start expanding our activities as a bank and provide loans to the private sector.”

“Our aim is to have 70% of our loans earmarked for loans with a sovereign guarantee and 30% focused on the private sector. We will directly provide funding to private sector companies involved in infrastructure rollout – for example an Anglo Platinum or a big construction project. We will provide loans, additional debt, guarantees or we could syndicate co-finance the project. We could also use credit enhancement where we use our credit rating to improve the risk profile of the project in such a way that we can get other players to participate.”

“The World Bank’s International Finance Corporation does private sector development. Thirty percent of our activities will model the corporation.”

“We have literally just opened that window of private sector activity now.”

Last year, the Brics launched its African office in Johannesburg and an office in Brazil is set to be launched soon.

“Brazil is going to happen in October or November – definitely before the end of 2018. This has all got to do with enhancing the efficiency of operation. We are in a different time zone in Shanghai. When we wake up in the morning, Brazil goes to sleep. It is very difficult to do business.”

The Brics African office is in the process of hiring four professionals to join the African Regional Centre head Monale Ratsoma, who joined the centre from the National Treasury.

Maasdorp said that there was a ‘robust pipeline of projects’ being developed at the local office.

By the end of the year, the bank would like to loan South African entities an additional $600 million.

“What the office will do here is to improve and increase our pipeline of projects. South Africa has lagged behind in terms of the numbers of projects. The [South African] economy needs that investment in infrastructure because the economy is sluggish. The economy is not growing on all cylinders at all. Every opportunity to increase investment in infrastructure adds to the economic growth story.”

“We are looking at approving between $1 billion and $1.5 billion a year in loans to South Africa.”

This would mean that over the next five years, the bank could loan South Africa between R70 billion and R80 billion.

The bank has approved $5.7 billion in loans for 23 projects and that is set to raise to $7.5 billion by the end of the year.

The loan was instead to be used to build transmission lines and a substation for the Soweto area to integrate renewable-energy projects from independent power producers, Fin24 reported.

“There has been serious governance challenges at Eskom. The bank wasn’t comfortable to proceed. We take great comfort from the fact that the government through the ministry of Pravin Gordhan and the initiatives of President Cyril Ramaphosa to completely restructure the Eskom board,” Maasdorp said.

“We hope we can bring that loan to conclusion.”

“We are looking at that [The latest Eskom results]. We will obviously access the numbers. We haven’t yet studied the full report.”

The bank last week announced it would loan the Development Board of Southern Africa $300 million for reducing greenhouse gas emissions and energy projects. This brings the total amount loaned to South African state owned enteprises by the bank to $680 million.

We live in a world where facts and fiction get blurred
In times of uncertainty you need journalism you can trust. For 14 free days, you can have access to a world of in-depth analyses, investigative journalism, top opinions and a range of features. Journalism strengthens democracy. Invest in the future today. Thereafter you will be billed R75 per month. You can cancel anytime and if you cancel within 14 days you won't be billed.
Subscribe to News24
Related Links
Brics bank approves R8bn loans for SA, Chinese projects
Next on City Press
Eskom: The worst is still to come