The Brics Bank wants to become a multibillion-rand player in the South African bond market now that it has received a top-end credit rating and approval to issue bonds in the local market.

The bank, formally known as the New Development Bank (NDB), has the governments of Brazil, Russia, India, China and South Africa as its members.

NDB CFO Leslie Maasdorp said this week during an interview in Cape Town, where the bank was holding its fourth annual meeting: “Our intention is to become a big and frequent issuer in South Africa [of rand-denominated bonds]. We believe South Africa has very deep and liquid bond markets.”

Read: Brics bank looks to rand bond on the JSE

“Local currency financing is an important strategic decision of the NDB. In addition to US dollars, we will also raise and lend local currency. Ultimately, we want to give the borrowers the option to decide whether they are more comfortable with local currency.

"The reason why local currency is preferred in many instances is because the revenue from projects like a toll road or a power station is typically in local currency.”

In South Africa, the NDB will be issuing a R3.3 billion loan for the Lesotho Highlands Water Project as a rand-denominated bond.

The other project is a loan of R1.1 billion to the Industrial Development Corporation for a renewable energy project.

“In respect of our local bond programme we will raise between R3 billion and R5 billion in the South African market.”

The NDB is likely to issue rand-denominated bonds in 12 to 16 weeks, which means that the bond issue is likely to take place in the first part of the second half of 2019.

The bank is likely to issue local currency-denominated bonds in Russia and India later this year.

Maasdorp said that the bank had applied to the JSE for an inward listing of its rand-denominated bonds. “We have applied for a R10 billion programme and received approval to proceed.”

National Treasury director-general Dondo Mogajane said in reaction to the news that the NDB would issue up to R10 billion in rand-denominated bonds in the local market: “It is something that we welcome and something that we will encourage.”

Maasdorp said: “We feel very confident about the local market because the bank has one of the highest credit ratings of any issue in South Africa. We have an AA+ international credit rating from S&P Global Ratings and Fitch Ratings.”

An AA+ rating is one notch below AAA, which is the highest credit rating that S&P and Fitch can assign.

S&P didn’t assign the NDB the top credit rating due to concerns regarding the fact that the bank’s shareholders were concentrated in and limited to five national governments. In addition, all five countries have credit ratings that are lower than AA+.

S&P also noted that the NDB didn’t have a long track record of “strong repayment behaviour and preferred creditor treatment from borrowing countries”.

“An increase in shareholders would help the NDB to fulfil its mandate across a wider geographical scale and could support its key policy role, as well as reduce credit risk concentration,” S&P said when it issued its first rating of the NDB’s creditworthiness in August last year.

S&P added that it would upgrade its assessment of the NDB’s credit rating if the bank substantially increased the geographical scope of its operations through the increase of its shareholders “with more than token stakes”. 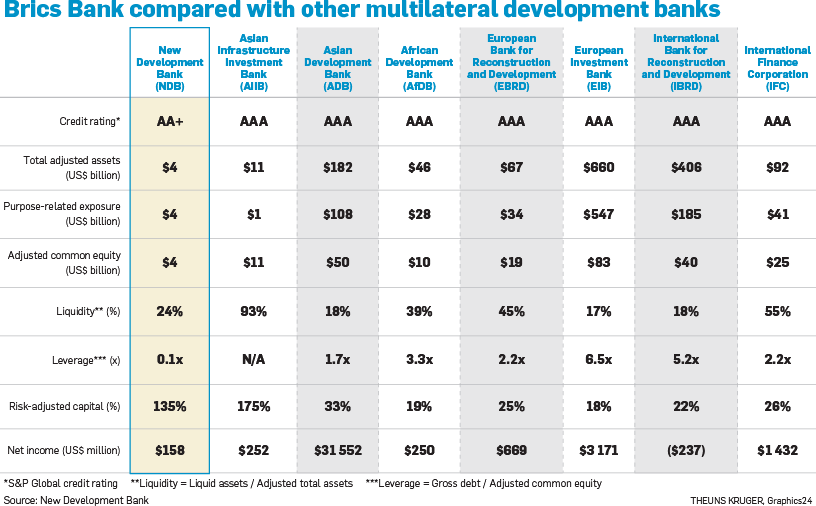 The NDB will raise the money for its rand-denominated bonds from local South African investors.

“We expect a very large appetite from domestic banks. The big banks will be a big component of the buyers of our bonds.”

The NDB issued its first local currency bond in China on February 22 and 25. The bond was to the value of three billion renminbi.

“We have already had exchanges with investors in the past and we’ve contacted the Association for Savings and Investment South Africa,” said Maasdorp.

“Investors are very excited about our entry into the market as it allows them diversification opportunities.”

The NDB has loaned South African government parastatals $1.5 billion and is aiming to lend a further $800 million to reach a total loan value of $2.3 billion by the end of this year.

Regarding the possibility of new member countries joining the NDB, Maasdorp said that the institution was always created as a global bank.

In the long term, the Brics countries would dilute their equity from 20% each to 11% each for a total stake of at least 55% for the five Brics nations.

Then a 25% stake would go to other emerging markets and 20% to development countries.

“The bank will definitely expand. What will it look like? It will be a more emerging-market-focused bank. Eighty percent of the bank will always be controlled by emerging markets.”

We live in a world where facts and fiction get blurred
In times of uncertainty you need journalism you can trust. For 14 free days, you can have access to a world of in-depth analyses, investigative journalism, top opinions and a range of features. Journalism strengthens democracy. Invest in the future today. Thereafter you will be billed R75 per month. You can cancel anytime and if you cancel within 14 days you won't be billed.
Subscribe to News24
Related Links
Mboweni: Southern Africa could benefit from Brics bank funding
Brics bank looks to rand bond on the JSE
‘Brics bank has been quite disappointing’
Next on City Press
Global inflation demon to get worse