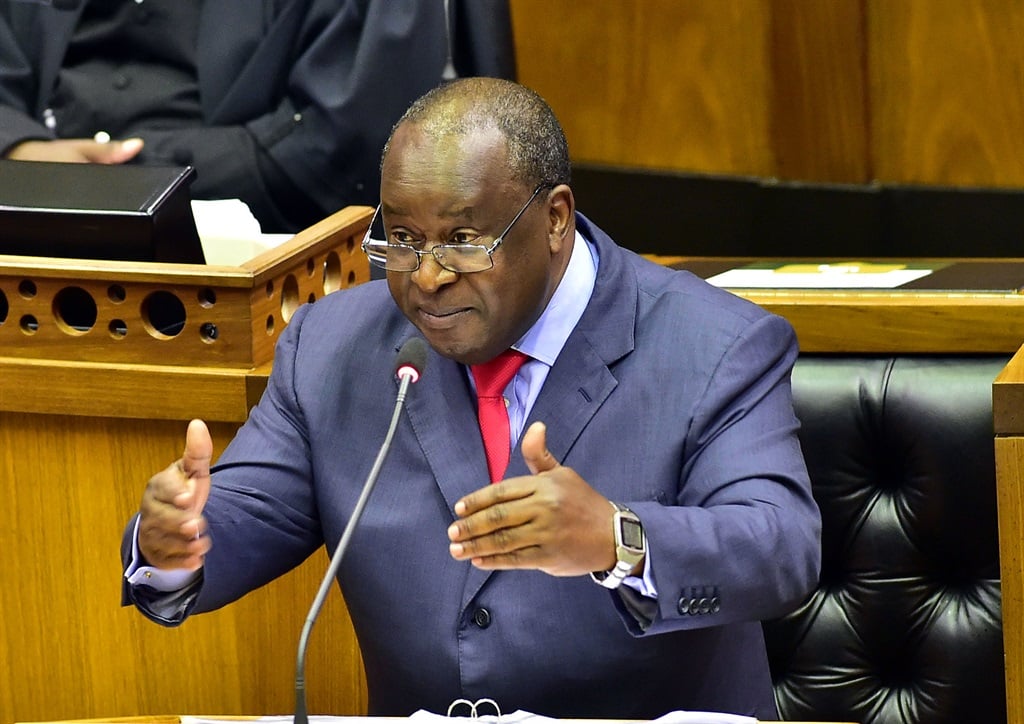 Government sources of income for the 2021/22 period include R1.365 trillion in tax revenue, R482.6 billion in borrowings and R32.5 billion in non-tax revenue.

Due to the higher budget deficit, coupled with fluctuations in interest, inflation and exchange rates, debt-service costs will continue to rise over the medium term.
Minister Tito Mboweni

Another major contributor to government expenses is debt-service costs, estimated at R916 billion over the MTEF period (three-year period) and at R269.7 billion for 2021/22.

“Due to the higher budget deficit, coupled with fluctuations in interest, inflation and exchange rates, debt-service costs will continue to rise over the medium term. They exceed all individual consolidated spending items except social development, learning and culture.

“They are also the fastest-growing item of spending by function. Over the medium term, debt-service costs are expected to average 20.9% of gross tax revenue,” said the minister.

Mboweni said government will also roll-out a free mass Covid-19 vaccination campaign for which “more than R10 billion has been allocated for the purchase and delivery of vaccines over the next two years.

“Given the uncertainty around vaccination campaign costs, the contingency reserve has been increased from R5 billion to R12 billion in 2021/22. These interventions do not add to longer-term expenditure,” said Mboweni.

Apart from the direct health benefits, a successful vaccination programme will allow for the economy to fully reopen.

Conversely, a slow, stuttering roll-out poses the most significant threat to economic recovery, he said.

The 2021/22 budget continues to prioritise social objectives and shows that budget allocations for expenditure items including learning and culture, health and social development make up 56.6% of allocations over the medium term.

The special Covid-19 social relief grant was allocated R2.1 billion and has been extended until the end of April 2021. Unemployment Insurance Fund (UIF) has been extended for another three months to April.

The minister said they will also increase spending on the Covid-19 Temporary Employer/Employee Relief Scheme to R73.6 billion in 2021/22.

On a more positive note, provisional allocations of R11 billion for the public employment initiative in 2021/22 have also been made.

Read | Economic inclusion for women and youth: Budget 2021 and beyond

By the end of January 2021, more than 430 000 jobs had been supported through the public employment initiative and an additional 180 000 jobs are in the recruitment process.

Most placements are in education, in programmes to reduce landfill waste, in the creative and cultural sector, and in business services.

The budget review also speaks to state-owned entities (SOEs) being funded through reprioritisations.

In 2020/21, the financial performance of SOEs deteriorated. The Land Bank defaulted on its debt and several other companies are at risk of default.

Denel, Eskom and SAA remain reliant on state support, including guarantees that enable them to access funding.

The downgrade of government debt, high levels of leverage and the deteriorating financial performance further limited SOEs access to capital. As a result, many state-owned companies are at risk of defaulting on their debts.

We will stabilise government debt at 88.9% of GDP in 2025/26 and the ratio will decline thereafter.
Minister Mboweni

The Land Bank defaulted on its debt obligations on April 1 2020 and is renegotiating its repayment terms.

It is against this backdrop that the National Treasury proposed allocations are R5 billion in 2021/22, and R1 billion in each of the two subsequent years.

Mboweni said the recapitalisation will funded by reprioritisation. Adding that the 2021 Medium Term Budget Policy Statement (MTBPS) will confirm the sources of reprioritisation to accommodate this requirement.

“The 2020 special adjustments budget included an allocation of R3 billion for Land Bank in 2020/21, while the 2020 MTBPS noted that an additional R7 billion would be required to support the restructuring of the entity,” reads the review.

Over the next three years, government’s consolidated spending is projected to amount to R6.16 trillion.

Government spending excluding interest on debt has grown sharply in real terms, primarily because of increases in the public sector wage bill.

The National Treasury proposed a correction of this imbalance by reducing growth in the compensation bill and reducing the share of spending on public-service wages over the medium term.

Mboweni said: “We will stabilise government debt at 88.9% of GDP in 2025/26 and the ratio will decline thereafter. This is a significant improvement to the framework we presented in October last year and creates a sound platform for sustainable growth.”

To reduce growth in the public-service wage bill, the 2020 Budget proposed reductions to consolidated compensation spending amount to R303.4 billion from 2020/21 to 2023/24.

This consists of R160.2 billion announced in the 2020 Budget and an additional R143.2 billion over the medium term.

Treasury said compensation of employees accounted for about 34% of consolidated spending in 2019/20.

Government will not implement the additional tax revenue measures announced in the 2020 MTBPS. These were R5 billion for 2022, R10 billion per year in the following two years and R15 billion in 2024/25.
Minister Mboweni

Between 2006/07 and 2019/20, compensation was one of the fastest-growing spending items, increasing faster than GDP growth.

“Wage negotiations will take place in the Public Service Co-ordinating Bargaining Council and that government will negotiate on the basis of fairness, equity and affordability.

“A pact that exceeds budgeted amounts would present a risk to the fiscal framework.

For example, a three-year inflation linked agreement would raise the total shortfall to R112.9 billion by 2023/24. And an agreement similar to the one achieved in 2018 – 1 percentage point higher than inflation – would create a compensation shortfall of R132.7 billion (or 2.2 per cent of GDP) by 2023/24,” said Mboweni.

It is worth noting that the Covid-19 pandemic also led to many business closures and job losses.

Treasury said to support households, businesses and the economy in the context of relatively high income tax rates, government will not introduce measures to increase tax revenue in the 2021 budget.

Mboweni said the previously announced increases over the next three years will be withdrawn.

The minister had previously announced increases amounting to R40 billion.

“Government will not implement the additional tax revenue measures announced in the 2020 MTBPS. These were R5 billion for 2022, R10 billion per year in the following two years and R15 billion in 2024/25.

The change in tax projections is expected to support economic recovery by reducing financial pressure on households and businesses.

However, many businesses have either closed down or are in financial distress as a result of pandemic-related restrictions on economic activity.

Mboweni announced the reduction to corporate income tax rate from 28% to 27%.

He said: “This will be done alongside a broadening of the corporate income tax base by limiting interest deductions and assessed losses. We will give consideration to further rate decreases to make our tax system more attractive”.

Personal income tax collection has been affected by rising job losses and lower earnings for those who are employed.

The personal income tax brackets and rebates will increase above the inflation rate of 5%.

“This will provide R2.2 billion in tax relief. Most of that relief will reduce the tax burden on the lower and middle-income Page 11 of 22 households. This means that if you are earning above the new tax-free threshold of R87 300, you will have at least an extra R756 in your pocket after 1 March 2021,” said Mboweni.

Specific excise duties are expected to fall by nearly 50% as a result of restrictions on trading activity and tax deferrals.

Inflation-related increases of 15c/litre and 11c/litre will be implemented for the general fuel levy and the RAF levy, respectively, with effect from April 7 2021.

We live in a world where facts and fiction get blurred
In times of uncertainty you need journalism you can trust. For only R75 per month, you have access to a world of in-depth analyses, investigative journalism, top opinions and a range of features. Journalism strengthens democracy. Invest in the future today.
Subscribe to News24
Related Links
Budget 2021: Taxpayers saved by mining!
2021 budget: Brace for impact
Editorial | Tito Mboweni’s budget tightrope
Next on City Press
1% of world’s rich pollute more than 50% of the world’s poor

Choose a newsletter
Voting Booth
Please select an option Oops! Something went wrong, please try again later.
Police need training against their brutality
26% - 26 votes
A need for more action against police
14% - 14 votes
Police protect themselves
25% - 25 votes
Nothing will change
35% - 35 votes
Previous Results
The best of 2020
Can you guess who featured in our most popular articles from 2020?