South Africa's internet quality, in relation to internet speed, stability and growth, ranks 62nd in the world and is 8% worse than the global average, a study by Surfshark reveals.

In spite of this, South Africa still ranks among the best in Africa and where mobile internet is concerned the fourth annual edition of the Digital Quality of Life Index (DQL) reports that it is the most affordable in Africa.

The DQL takes into account five categories to arrive at an overall score, namely: internet affordability; electronic government; electronic infrastructure; and electronic security, each with sub-categories.

READ: Cutting out the E-waste

Compared to the 2021 report, South Africa climbed two places and ranks between Oman and Georgia.

In terms of e-government, South Africa's rank remained stagnant for online service index and dropped three places for AI readiness, despite the government's strategy push for the 4IR.

Regarding internet service affordability, mobile and broadband were considered separately with the company measuring that on how long South Africans would need to work to afford internet.

This year South Africans would need to work a minimum of five hours to afford broadband, which is "16 times more than Israeli citizens, for whom the most affordable package costs only 19 min of work monthly".

However, mobile internet has become slightly more affordable as "residents can buy 1GB of mobile internet in South Africa for as cheap as 35 seconds of work per month, 13 times less than in Kenya".

Yet the report says that it found internet access is now less affordable globally. How long it takes to afford internet. Photo: Surfshark

Kenya ranks 78th in the world and ranks better than South Africa in only one category: e-infrastructure.

Out of all index pillars, South Africa's weakest spot is e-infrastructure, which needs to improve by 70% to match the best-ranking country's result (Denmark's).

"While countries with a strong digital quality of life tend to be those of advanced economies, our global study found that money doesn't always buy digital happiness," explains Gabriele Racaityte-Krasauske of Surfshark.

Overall, seven out of 10 highest-scoring countries are in Europe, which has been the case for the past three years, with Israel, Japan and South Korea the other three countries in the top ten.

The global average speed for mobile internet was 58.13Mbps, while broadband's global average was 89.02Mbps. "In comparison, Singapore's residents enjoyed mobile speeds up to 104 Mbps and [broadband] to as much as 261 Mbps - that's the fastest internet in the world this year." 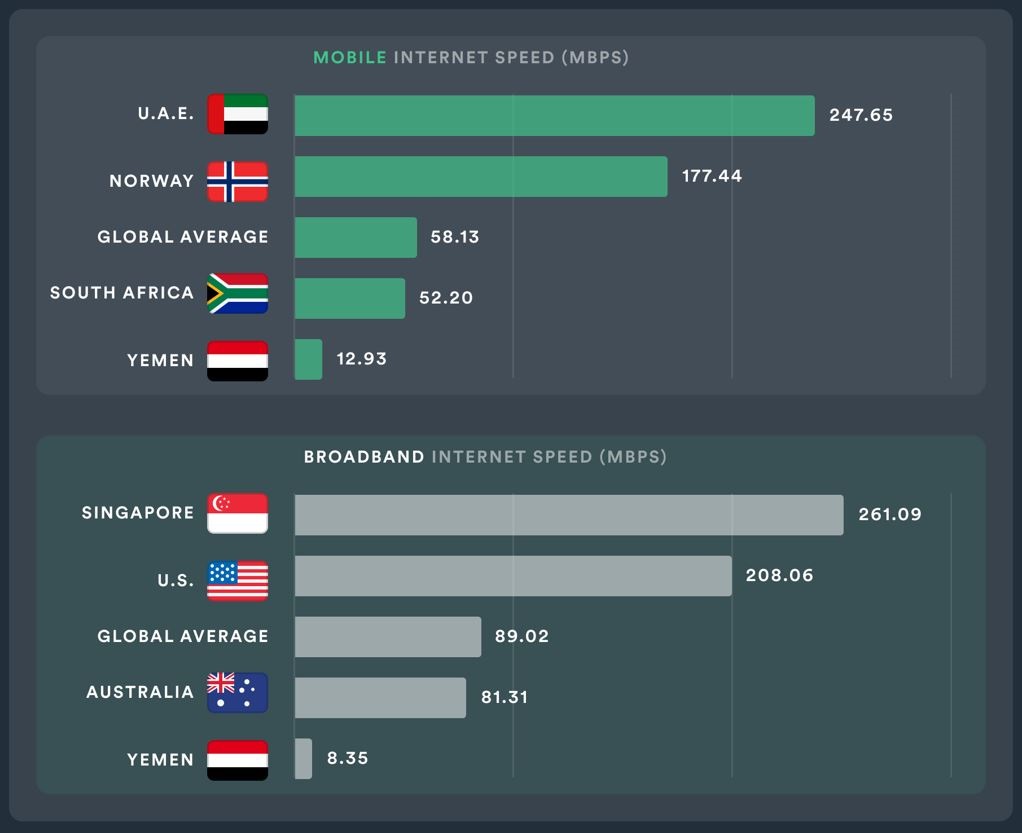 The 2022 DQL research examined more than 7.2 billion people regarding five core pillars and 14 underpinning indicators that provide a comprehensive measure. The study is based on the United Nations open-source information, the World Bank, Freedom House, the International Communications Union, and other sources.