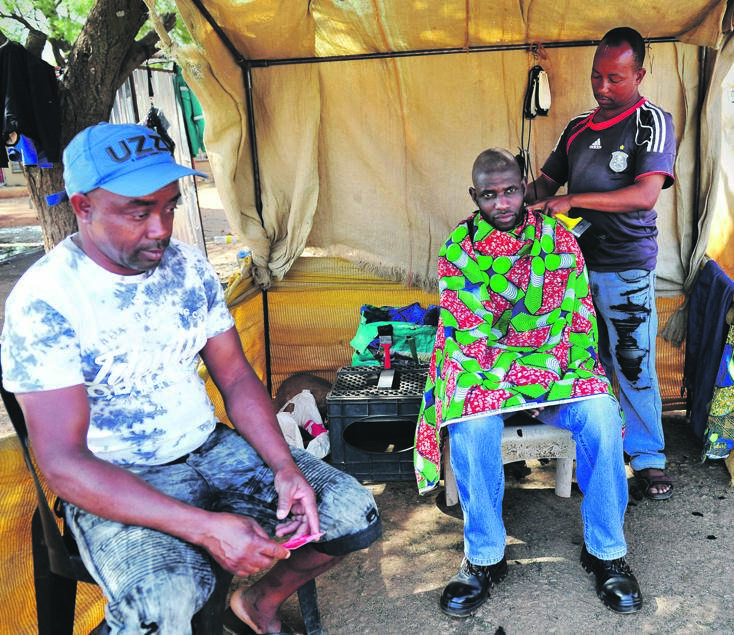 The economies of towns located near the 2012 killing fields were hard hit by the massacre and have yet to recover, writes Lesetja Malope

It is seven years on, and still the tragedy that befell workers at Lonmin’s platinum mine in Marikana, near Rustenburg in the North West, is being keenly felt.

So, too, are the economic losses that occurred as a result of the massacre.

Among the affected communities that bore the brunt of the deadly strike, in which 44 people – including mine workers, police officers and security guards – were killed, was Bokamoso informal settlement in Wonderkop.

Bokamoso had only been in existence for three years, with its economy just starting to make inroads, when the strike began in 2012. She spoke to City Press on Wednesday in Bokamoso’s community hall, which was established four years ago but has yet to be officially opened.

Dikgang said the community was almost entirely comprised of mine workers’ families, who were still reeling from the hardships they experienced during the labour dispute and subsequent violence that hit Marikana.

Dikgang recalls clearly how desolate the area was at the time, with little activity going on while the conflict was playing out.

“Even the kids did not go to school because the mine buses were not there to transport them. Everyone was here just waiting for handouts.”

According to Dikgang and some of the community members City Press spoke to this week, the area is now desolate, its economy crippled.

Even the few government-run initiatives have stopped because of theft and the dearth of economic activity.

Bokamoso is on a spacious tract of land which was donated to the municipality by the local tribal authority. It supports about 850 households. Most of them relocated from a nearby squatter camp that was wiped out by floods a decade ago.

The only notable public infrastructure is the community hall.

On a cursory glance it appears complete, but on closer inspection it is clear that there is still outstanding construction work to be done, the most urgent being the building of a sewerage system.

Dikgang said that currently, only 10 women in the area are employed by government.

Hired by the provincial department of public works on a two-year contract, the women work for 10 days a month and are paid R850 to clean the area around the community hall.

Their contract ends next month and the women have no idea what the future holds. One of them, Nontsikelelo Gwabeni, told City Press: “The community also has a big challenge in that when the mines retrench people they come here, because even though there is no economic activity in the settlement, they come for a space to live.”

Another notable feature of Bokamoso – a Setswana word that means ‘future’ – is the absence of foreign-owned spaza shops and informal businesses that are usually a feature in similar settlements across the country.

“The reason you do not see spazas is because we, as a community, have an agreement not to allow foreign-owned spaza shops here,” said Dikgang.

“We don’t want Somalis or other people here. We only have three foreigner-owned shops and we don’t want more. Those three shops were there before the agreement – that is why we let them continue.”

Dikgang said that although only one family was directly affected when a breadwinner was among those killed, it had a ripple effect on the community’s economy as the massacre occurred during the settlement’s infancy, while the economy was still starting up.

Now, a lack of economic intervention has exacerbated the situation. Bokamoso residents despair at their bleak future.

Almost 10km away, in the heart of Wonderkop, the scene appears more positive. We are clearly in one of the busier parts of the township. A taxi rank is located on Sibanye-Stillwater property – the mining company that recently acquired Lonmin. It is abuzz with various informal businesses and only a handful of taxis.

Ramasi Mute, a Mozambican barber who came to the area almost 15 years ago, said the Marikana massacre had sealed the township’s fate and small businesses like his had not been the same since.

“Before 2012, business was good. We would make good money, without racking up debt. But now we are forced to service our clients on debt. That is something that started during the 2012 strike,” Mute said, adding that many of his clients are unable to pay the R15 upfront that he charges for his barber services.

Mute noted that the economic conditions of some of the workers seemed to have improved as many more of them owned cars than before the massacre.

“A lot of them now own le nna kea sebetsa [Setswana for ‘I work too’, which is township slang for a VW Polo]. Before, they didn’t have cars.”

He added that on the other hand, many people were in dire straits.

A few kilometres from the taxi rank, and a stone’s throw from the infamous koppie where police opened fire on the mine workers, lies another informal settlement called Ikaneng. Because of its proximity to the killing fields, this settlement was most affected by the tragedy.

Among the colourful businesses lining the main road to the koppie is one displaying well-crafted works made of steel. It belongs to another Mozambican, Alberto Matshinhe, who has witnessed the rise and fall of the economy in his neighbourhood.

An elderly man who has lived in South Africa since 1989, Matshinhe and his welding business seem to be doing well.

After reluctantly agreeing to an interview, Matshinhe said he relocated to the area in 1999, after living in Mabopane, in Tshwane.

“I came here because my brother works at Sibanye in Marikana. I was running a spaza shop, selling various produce, including lots of fruit and vegetables. But during the strike, the stock in my shop was spoilt as my wares were not being bought. I ran that business from 1999 and the Marikana strike killed it.”

After he was forced to close shop, he resorted to starting a welding business. Although labour-intensive, he had the requisite skills.

Matshinhe employs two young men to assist him in his workshop, located in an unfenced yard along the main gravel road leading up to the koppie.

There isn’t much business but it’s better than nothing.

“When there is an event at the koppie, we have to close because the buses come to park here,” he added, pointing to an area close to his doorstep, where the steel burglar doors he made stand.

Asked if he thought the community had recovered from the strike, Matshinhe echoed the sentiments of other residents.

“No, and it probably never will."

We live in a world where facts and fiction get blurred
In times of uncertainty you need journalism you can trust. For 14 free days, you can have access to a world of in-depth analyses, investigative journalism, top opinions and a range of features. Journalism strengthens democracy. Invest in the future today. Thereafter you will be billed R75 per month. You can cancel anytime and if you cancel within 14 days you won't be billed.
Subscribe to News24
Related Links
Mathunjwa wants traditional authority to take mines
The Marikana Massacre: As it happened in 2012
Shock report: Faulty radios meant no control of cops at Marikana
Next on City Press
Yes to universal healthcare but no to NHI model

Listen to our latest podcasts.
Voting Booth
A new report by the Electoral Integrity Project, which looks at the quality of electoral integrity worldwide, has identified South Africa as having the second-highest level of integrity in its elections in Africa. Do you agree with the report?
Please select an option Oops! Something went wrong, please try again later.
No
42% - 43 votes
Yes
27% - 28 votes
We should be first
31% - 32 votes
Previous Results