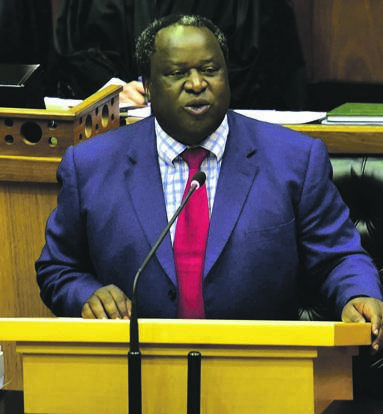 Finance Minister Tito Mboweni has taken a swipe at former public administration ministers, Faith Muthambi and Richard Baloyi, for having put a strain on the fiscus by signing off wage agreements without mandates during their time as ministers.

Mboweni, addressing the media before delivering his medium term budget policy statement in Cape Town on Wednesday, said the part of the reason government’s huge wage bill had become unmanageable was because of decisions taken by the two former ministers.

“I know I was told not to say this but Richard Baloyi and Faith Muthambi put us in this mess. They signed agreements without mandates and one of them has been made an ambassador. You must call a spade a spade and not a big spoon,” he said.

Muthambi is still a member of Parliament.

The medium term budget policy statement has outlined a number of measures to trim expenditure over the next two years, including at least saving R50 billion from goods, services and transfers while more savings will be sought in other areas including in executive remuneration.

“In addition, non-interest spending in the outer year of the framework is constrained in line with consumer price inflation. That said, if we want to achieve our target, we will need to find additional measures in excess of R150 billion over the next three years, or about R50 billion a year,“ he said.

At least 29 000 public servants earn more than R1 million a year, more than double the number in 2006/7, a problem Mboweni said was exacerbated unmandated wage agreements signed under the previous administration.

Politicians’ perks will also be revisited, salaries frozen and possibly even cut and the guidelines to curb the ministerial perks have already been approved by the president, Mboweni said.

Among the perks members of Cabinet will have to do without are:

- For the foreseeable future, cabinet, premiers and MECs’ salaries will be frozen at current levels, with the likelihood of an adjustment downwards;

- A new cellphone dispensation will cap the amount claimable from the state;

- All domestic travel will be on economy class tickets;

Mboweni’s previously announced measures such as offering early retirement without penalties, reduction of bonuses and the freezing of parliamentarians’ salaries have yet to bear the desired savings.

We live in a world where facts and fiction get blurred
In times of uncertainty you need journalism you can trust. For 14 free days, you can have access to a world of in-depth analyses, investigative journalism, top opinions and a range of features. Journalism strengthens democracy. Invest in the future today. Thereafter you will be billed R75 per month. You can cancel anytime and if you cancel within 14 days you won't be billed.
Subscribe to News24
Related Links
Unemployment, Eskom, should be focus of budget speech
Mboweni’s plan: 7 considerations that will actually help small businesses
SA’s economic paralysis is a leadership crisis
Next on City Press
Russia says Nord Stream 'sabotage' likely to be state-sponsored act