The bank is looking at priorities and, given the urgent need, the specific-purpose loan will ensure that the public utility puts more power into productive use

The New Development Bank (NDB) will be keeping an eye on the restructuring plans at Eskom, but will not be waiting for the process to unfold before approving the power utility’s two loan applications to the value of $780 million (approximately R11 billion).

So said the NDB president, Kundapur Vaman Kamath, who pointed out during a telephonic interview that approving Eskom’s loan application was a priority as the government, and Eskom in particular, were under strain.

“Our own assessment is that the restructuring could take time and the need is urgent – so we will proceed with the loan now so that the need is met,” he said.

“We are looking at the priorities. These seem to be in the area of infrastructure and, within that area, power seems to be the first thing that the country needs. We have read that Eskom is likely to be restructured and we believe it is what the country needs,” he said, adding that the bank would approve Eskom’s loan as a priority and with urgency.

Kamath said South Africa had an impressive uptake on the bank’s loans: more than $1.5 billion had been loaned to the country and, by the end of the year, the figure would have been increased to $2.4 billion.

“It’s a specific-purpose loan [for $480 million] to ensure that Eskom puts more power into productive use. The need is urgent and what we are now funding is to make sure the new capacity they [Eskom] set up in the Medupi power project is brought online,” he said.

A NDB spokesperson said that Eskom had applied for a second loan for $300 million to improve its battery storage capacity.

He pointed out that the first year of the bank’s existence, from July 2015, resulted in all loans being directed to green energy projects and thereafter more sectors were considered.

“Our scope of projects has become quite wide in the past three years.”

Kamath said South Africa had an impressive uptake on the bank’s loans: more than $1.5 billion had been loaned to the country and, by the end of the year, the figure would have been increased to $2.4 billion.

This figure included a R3.2 billion loan to the Lesotho Highlands Water Project which, although it was being built in a neighbouring state, was guaranteed by the South African government.

“We have a fairly strong pipeline and we are hopeful that by the end of the year we would have done $2.4 billion in loans to South Africa. We have an appetite to do more,” he said.

Read: Eskom shock: ‘Errors’ could push up electricity prices by 50%

Kamath said Brazil, which has taken up very little money in loans from the bank, had just streamlined its processes to access loans.

“When we started, we found two of our members, China and India, had the most streamlined systems and were able to apply for loans.

“We found the other three countries – Russia, South Africa and Brazil – had different systems.

“Russia got it right last year. South Africa is getting it right now. Brazil is busy and should get it right by the second half of this year.

“It’s not the hesitancy to borrow, but more about how to go about borrowing,” he said. 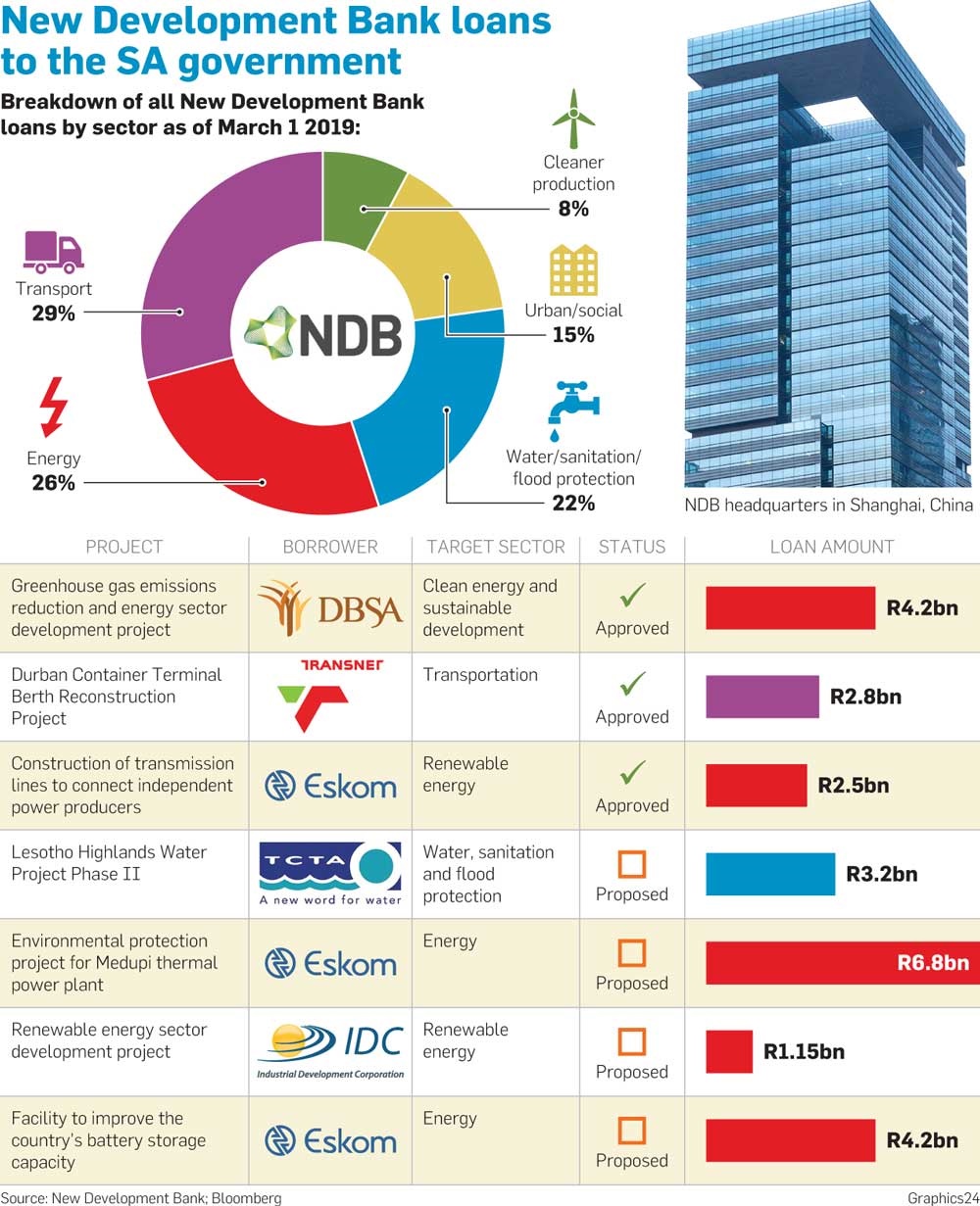 Kamath said the bank would open an office – the Americas regional office in Brazil – later in the year and that should make things much simpler.

In August 2017 the bank had officially opened its Africa regional centre in Johannesburg, Kamath said.

The regional centres worked closely with the government, and public and private sector agencies to identify projects with a strong development impact that could be supported by the NDB.

We live in a world where facts and fiction get blurred
In times of uncertainty you need journalism you can trust. For only R75 per month, you have access to a world of in-depth analyses, investigative journalism, top opinions and a range of features. Journalism strengthens democracy. Invest in the future today.
Subscribe to News24
Related Links
More trouble for Eskom as defaulting municipalities gain new powers to not pay
Eskom’s dodgy deal that stole our power
Eskom close to not paying staff salaries
Next on City Press
Unemployment in SA worsens again, rising to 34.9%

Listen to our latest podcasts.
Voting Booth
Were the knee-jerk travel bans imposed on SA following our detection of the Omicron variant necessary?
Please select an option Oops! Something went wrong, please try again later.
We are being punished
56% - 5 votes
Rather safe than sorry
22% - 2 votes
They have every right
22% - 2 votes
Previous Results
The best of 2020
Can you guess who featured in our most popular articles from 2020?