A field of black, serried rows of rectangles has arisen in the Kalahari, about 10km north of the Sishen iron ore mine. In late November last year, a consortium led by a unit of Spain’s renewable energy giant Acciona and local consortium Aveng plugged 74 megawatts of renewable electricity capacity into South Africa’s power grid.

And after six months, the owners of the field of thin domino-like squares are smiling.

The Sishen solar plant is outperforming all of the Spanish owner’s other plants, pumping its planned megawatts into the grid as expected.

Although the solar plant’s output is 94MW, only 74MW is pumped into the grid after the energy is converted from direct current to alternative current, as required by South Africa’s grid.

A network of red, sandy roads connects the panelled fields and sheep can often be spotted grazing between the rows.

The solar panels at the plant are supported on 470 trackers that are programmed to automatically follow the sun across the sky from east to west every day to optimise the capture of the sun’s rays.

The red dust, a feature of that part of the Kalahari, does not bother the solar panels at all.

“Sishen was a prime location for us,” said Esteban. “In renewables, it is all about location, and this is one of the best.”

The Sishen plant is Acciona’s largest photovoltaic plant in the world. The Spanish company is now the biggest independent renewable energy operator in the world.

It has more than 20 years’ experience in the sector and owns assets in five technologies worldwide: wind power (7 180MW in operation); hydro (888MW); concentrated solar power (314MW); photovoltaic solar (143MW at peak) and biomass (61MW). The company produces more than 21 terawatt-hours – equivalent to the consumption of more than 6 million households.

The Sishen project was approved by the department of energy in the second round of its renewable energy independent power producer procurement programme.

The programme has a target of 3 725MW in renewable technologies over five rounds. The fifth round is yet to be convened.

Acciona is also part of a consortium that is currently completing the 138MW Gouda wind farm in the Western Cape, which was awarded in the second round of the procurement programme.

Esteban said the Sishen plant and the Gouda wind farm were just the start of their expansion into South Africa. He said Acciona’s experience in the country had been pleasant.

“Normally when entering a new country we are quite nervous, but the South African contractor output has been very good,” he said.

Acciona had such a positive experience that they were able to complete their projects under budget and within the specified timeframe.

The Sishen plant was constructed in 16 months, at a cost of about R2 billion. The performance of the plant in the past six months has also astounded the Spaniards. “It is simply amazing,” Esteban said.

Acciona can’t wait to make further inroads into South Africa’s renewable energy market and is currently preparing papers for the next round of the renewables programme.

The company will present new projects in round five and intensify its activity to materialise other renewables initiatives in South Africa, according to Acciona Energy Global CEO Rafael Mateo.

But a stumbling block to properly exploiting the renewable sources of the Northern Cape was the transmission lines, Esteban said.

He said an upgrade of the current grid was long overdue, as the grid could only handle a certain number of plants at the moment. With new projects on the horizon, the transmission lines in the Northern Cape were simply not adequate.

A big part of South Africa’s renewables programme was the investment in local communities that was expected of winning bidders. Mateo said the company had similar experiences working with local communities in Mexico, where Acciona also had a large footprint.

“This was not new for us,” he said. “But I’m proud to say that we went even further than the requirements stipulated in our contract.”

During construction, more than R657 million was procured from or subcontracted to small and micro enterprises. Now that the plant is in operation, the project employs 19 people, 16 of whom work at the plant and the other three employees work at the head office in Cape Town. Six people are from the local community.

The plant’s development company has committed to allocating 2.1% of its annual revenues, around R8 million, to community-development measures.

The Sishen photovoltaic plant:
. Has a planned capacity of 94.3MW
. Is pumping 74MW into the grid every day
. Has 319 600 photovoltaic modules
. Has a generation capacity of 216 gigawatt-hours per year, the highest in Africa
. Generates power equivalent to the consumption of 100 000 SA households
. Covers approximately 250 hectares
. Is expected to get about 2 800 hours of sun a year - SOURCE: SISHEN

We live in a world where facts and fiction get blurred
In times of uncertainty you need journalism you can trust. For only R75 per month, you have access to a world of in-depth analyses, investigative journalism, top opinions and a range of features. Journalism strengthens democracy. Invest in the future today.
Subscribe to News24
Related Links
Sishen saga (almost) over
ConCourt puts end to Sishen dispute
Sishen community trust faces fraud probe
Next on City Press
Budget speech reaction: Some promising noises at the top, but we need implementation 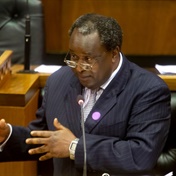 Read more on:
kalahari
Podcasts
Podcast | How to pay off your home and car