A worker wearing a protective suit is seen inside the Shanghai Stock Exchange building, as the country is hit by a new coronavirus outbreak, at the Pudong financial district in Shanghai, China on Friday (February 28 2020). Picture: Aly Song/Reuters

The rand headed for a near four-year low, stocks tumbled and bonds slumped as concerns about a looming credit-rating downgrade to junk compounded fears about the effect of the coronavirus on the country’s economy.

This as news broke that two South Africans working on a Japanese cruise ship had tested positive for the new coronavirus.

The health department, in a statement released on Friday, said it had been made “aware by Japanese authorities through the South African embassy in Tokyo, that there were 12 South African crew members working on board the Diamond Princess Cruise Ship when it was affected by Covid-19.”

“On February 25, we were informed by the Japanese authorities that two of these South Africans tested positive for Covid-19. They are currently being treated in Japan and the latest reports indicate that they are currently asymptomatic,” the ministry said in a statement.

The department said it would be best for the affected to be treated in Japan “until they are fully recovered from the virus and are no longer contagious before they travel again.”

The remaining 10 will be allowed to disembark the Diamond Princess cruise ship – which docked in its own port of Yokohama with 3 700 people on board – after they test negative for coronavirus and are subjected to a 14-day quarantine in Japan. 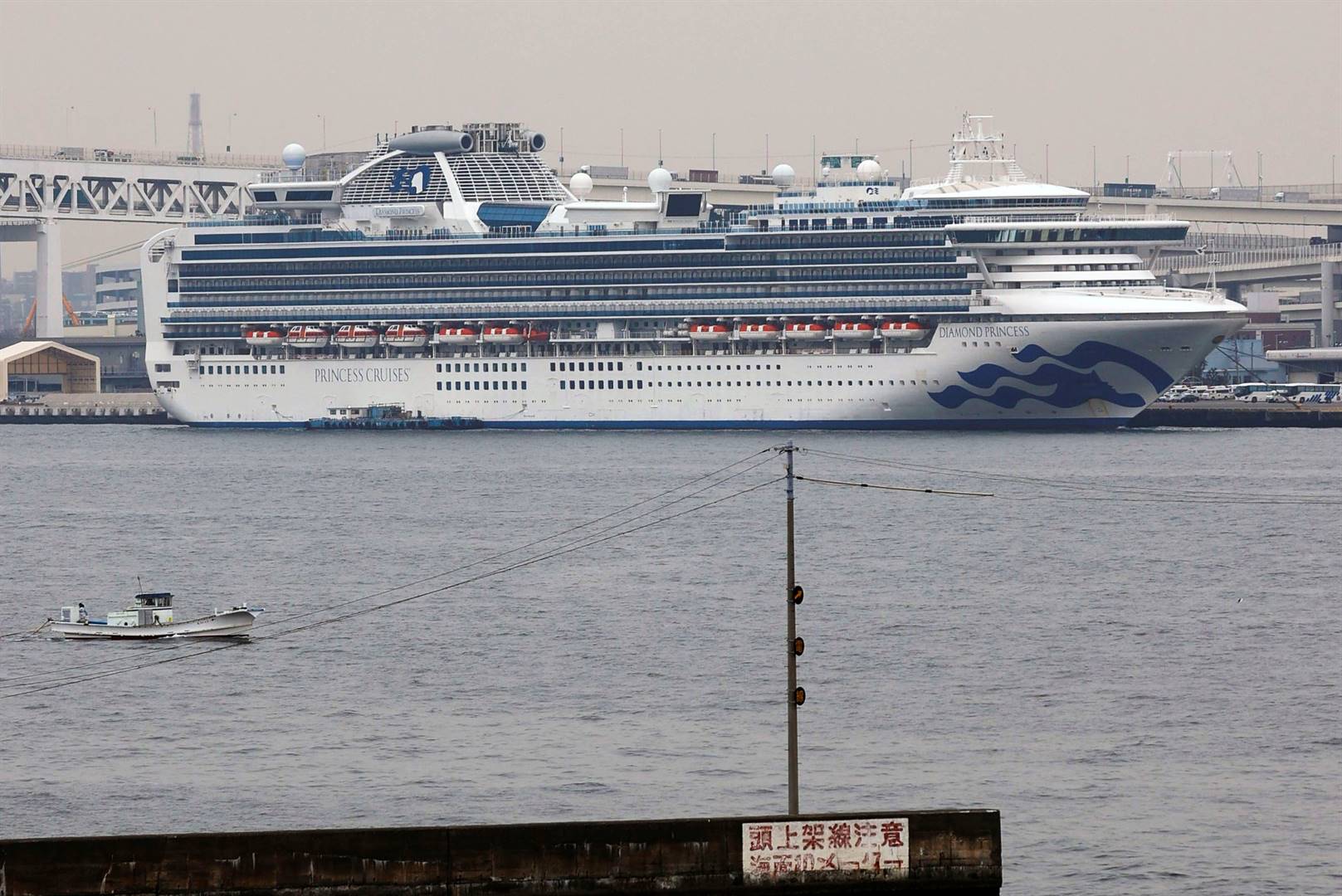 The Diamond Princess cruise ship is anchored at a port in Yokohama. Picture: Kyodo News via AP

The stampede away from risk assets hammered commodities from oil to copper and iron, driving the Bloomberg Commodity Index to a 33-year low amid rising fears demand for raw materials will be crushed as the virus weighs on global growth. China, the epicentre of the disease, is the biggest buyer of South African commodity exports.

“Emerging-market currencies are the conduit for fear” about the effect of the virus, said Nema Ramkhelawan-Bhana, an analyst at Rand Merchant Bank in Johannesburg.

“The rand’s losses are unceasing, with no apparent anchor or mid point.”

Moody’s Investors Service on Thursday described South Africa’s fiscal risks as “elevated”, raising concern the country is heading for a downgrade to junk.

The ratings company, which is reviewing South Africa’s Baa3 assessment next month, said the government would find it hard to achieve spending cuts mooted in the budget, including a reduction in the wage bill that’s opposed by labour unions.

Even with the spending cuts, government debt will continue to climb over the next three years as weak economic growth curbs tax collections, Finance Minister Tito Mboweni said on Wednesday.

Evacuation of South Africans in China

None of the affected individuals has been diagnosed with the virus nor have they exhibited any symptoms thereof.
President Ramaphosa

Meanwhile, President Cyril Ramaphosa on Thursday ordered the repatriation of citizens from the Chinese city of Wuhan.

He said that Cabinet had decided on this course of action following several requests from the families of South Africans in the city.

“It is estimated that there are 199 South Africans citizens in Wuhan as per the latest consolidated list from the department of international relations and cooperation. At this stage, 132 of them have expressed the desire to be repatriated,” his office said.

“None of the affected individuals has been diagnosed with the virus nor have they exhibited any symptoms thereof. Upon arrival in South Africa, they will be placed in quarantine for 21 days as an additional precautionary measure.”

The statement added that the departments of health and defence would deploy healthcare personnel and supporting staff to provide assistance during the repatriation and quarantine processes.

However, Bloomberg reported that health experts had voiced concerns over the possible spread of the novel coronavirus in African nations that may be ill-equipped to handle such a crisis.

The West African nation of Nigeria confirmed its first case. The only other country on the continent to report a confirmed case is Algeria.

The case involved an Italian citizen who works in Nigeria and returned to Lagos on February 25, Nigeria’s health ministry said in a statement.

“The coronavirus patient to clinically stable with no serious symptoms, and is being managed at the Infectious Disease Hospital in Yaba, Lagos,” the ministry said.

Nigerian officials are reported to be working to identify all the patient’s contacts since he entered the country to ensure the outbreak was “controlled and contained quickly.”

The coronavirus — Covid-19, as this new strain is called — is thought to have originated in a market selling wildlife in Wuhan late last year. It has infected about 80 000 people and killed more than 2 700, mostly in China.

We live in a world where facts and fiction get blurred
In times of uncertainty you need journalism you can trust. For 14 free days, you can have access to a world of in-depth analyses, investigative journalism, top opinions and a range of features. Journalism strengthens democracy. Invest in the future today. Thereafter you will be billed R75 per month. You can cancel anytime and if you cancel within 14 days you won't be billed.
Subscribe to News24
Related Links
Chinese ambassador calls for unity in the fight against the coronavirus
Returning Chinese cause panic in Lesotho
SA seems unfazed as coronavirus spreads
Next on City Press
Analysis: Britain's new vision leaves onlookers with nightmares