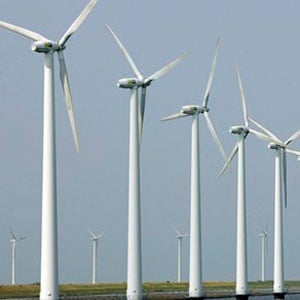 South Africa is Africa’s clean energy frontrunner. Since 2011, it has invested R249 billion in wind and solar technology.

This emerged at a talk by Michael Liebreich, chair of the advisory board at Bloomberg New Energy Finance, a leading provider of information on clean energy to investors, energy companies and governments. He addressed a packed auditorium during African Utility Week at the Cape Town International Convention Centre.

Around the world, R5.1 trillion has been invested in renewable energy – including wind and solar technology – following the crash of oil and gas prices. 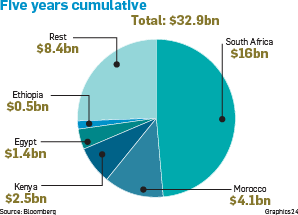 He started the talk by quoting business mogul Bill Gates, who said in November last year that “we need an energy miracle”. Gates committed $2 billion (R31 billion) of his own fortune to research and development into clean energy.

During discussions on global energy trends, Liebreich stressed that clean energy investment was on the rise, and that wind and solar energy would continue to become cheaper to introduce.

He admitted that changing to clean energy was like rebuilding the engine of an aeroplane in mid-flight. “In Africa, it’s even more difficult. Here, you’re attempting to rebuild the engine when you’re taking off. That’s a great challenge.”

He said African countries had clean energy investment potential, but creditworthiness of utilities remained a challenge.

“In terms of investment, a lot of work is yet to be done by African governments on the creditworthiness of utilities,” he said. Liebreich lauded the launch of South Africa-born US entrepreneur Elon Musk’s latest electric car, the Tesla Model 3. He called it a clean energy “miracle”, a “game-changer and the most successful technology launch of all time”.

University of Cape Town professor and energy expert Anton Eberhard took to the podium after Liebreich and said renewable energy could not be ignored.

“Renewable energy is breaking through in a way traditional power utilities cannot ignore any longer. Due to their variability, renewables are not suitable for base load generation, but they are becoming cheaper and we’ll have to maximise their contribution to the grid.”

We live in a world where facts and fiction get blurred
In times of uncertainty you need journalism you can trust. For only R75 per month, you have access to a world of in-depth analyses, investigative journalism, top opinions and a range of features. Journalism strengthens democracy. Invest in the future today.
Subscribe to News24
Related Links
Renewable energy production will keep lights on in Eastern Cape
More power to the people of SA
The state of renewable energy in SA
Next on City Press
Business chambers to fight ‘illegal’ municipal power tariffs