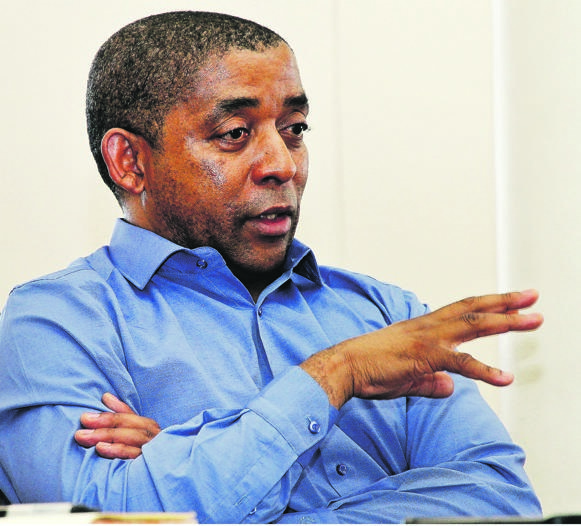 PRAGMATIC CEO Vuyani Jarana says suppliers need to be assured SAA is going to be there for the long haul so that they can build better trade relationships. Picture: Rosetta Msimango

Firm’s portfolio needs to be restructured to meet the demands of the market. The strategic equity partner idea could bring certainty about the airline’s future

SAA CEO Vuyani Jarana wants bold action from the government, demonstrating its clear intentions for the national carrier, so that a conducive environment is created for the turnaround plan to succeed.

Jarana said in an interview that so far, “although the government had been supportive by moving in and giving us some R5 billion, I think it has been more erratic than a clear delivery”.

The government should present “a bold view that says we have called it and we have said we are going to make the airline work” but, instead, what he heard was “almost like whispers in the corridors”.

“This is not our asset. It is a state asset and we are just the stewards trying to make it work for the state. To the extent that we are seen to be good stewards, we need the government’s backing and support.”

The state-owned SAA has incurred huge losses in recent years. The last time it made a profit was in 2011.

It is regularly cited by ratings’ agencies as a drain on the government purse because it has been surviving on state guarantees to remain operational.

In recent talks Jarana had with the SAA board the issue of speeding up funding was discussed.

“It does not help to get money late. You need to have certainty about the future because this is a game of confidence.”

He said suppliers needed to be assured that SAA was going to be there for the long haul so as to negotiate better trade relationships.

“By not being clear about future commitments in advance, the turnaround plan is affected,” he said.

The national carrier needed “certainty about funding, which is as important as getting the money”, he said.

“If I am not sure I am going to get it and it comes as a surprise, then it does not help because by that time I have lost ground.”

As part of rescuing SAA from financial morass, the government had toyed with the idea of bringing in a private strategic equity partner but Jarana said “we are not there yet”.

“We need to restructure SAA’s portfolio to be able to meet the demands of the market.

“The strategic equity partner [idea] is important because it could bring certainty about the airline’s future.”

It would also bring in people with new visions and ideas.

He said bringing in the private sector in a “mixed model” of ownership had proved to be a success in entities such as Telkom.

The discussion was finding currency among all stakeholders and there was progress, he said.

Treasury had pushed for the strategic equity partnership to go ahead, but the state of SAA at the time would have made it difficult to attract investors.

“Our feeling was that we would be selling a dream. So we said give us time just so that we can put markers on the ground.”

Jarana said there was “broad consensus” on the idea of a strategic equity partner, only the timing was an issue.

A strategic equity partner did not mean privatisation but rather “a mixed model of ownership”, he said, adding that his biggest headache was liquidity and funding.

“You end up spending more time arguing about funding and liquidity than anything else. It keeps you busy and we want to be kept busy turning around the airline and spending less time on funding.”

The cost of turning SAA around was put at R21.5 billion, which included R9.2 billion of old debt and R12.5 billion of new working capital.

After just a year since he took over the reins, Jarana said he was “bullish” about the chances of rescuing the ailing national carrier and turning its finances around in three years as promised.

He said he would restructure SAA “so that it is fit for the future”.

About 122 pilots identified as excess to SAA had been placed with other airlines in international markets, resulting in big savings, he said.

The redesign was expected to be concluded by March.

Outdated labour agreements were under review, particularly those that SAA could no longer afford.

“People need to accept that we are going to change some things and these are harder because they are about people’s hard-earned gains.

“But those gains are hollow if the airline does not exist, so we need to ensure that we work together to sustain the gains in a new format that talks to a modern airline in a highly competitive environment.”

Jarana said SAA was looking at cutting overheads by buying directly from original equipment manufacturers, cutting out the middle man and price mark-ups.

Ideally, SAA should be pushing for consignment stock, he said.

The airline was reviewing existing contracts to see if there were ways to save more costs.

“We are quite confident that we can take out 20%, 25% or even 30% from some of the big contracts because they were badly negotiated.

“We have R400 million already banked this year and we are geared to do a billion next year.”

Jarana said he was looking at the necessary interventions to ensure supply chain processes moved faster without compromising good governance.

“You could lose time before you get benefits. What is important is to be pragmatic.”

It meant that “SAA, the public enterprises department and Treasury should talk with one voice to ensure that we do not lose ground, working within the right governance framework and with the pragmatism that SAA needs today”.

Do you think SAA should be allowed to continue its costly turnaround plan or should the ailing state-owned enterprise look for a private equity partner to boost competition?

SMS us on 35697 using the keyword SAA and tell us what you think. Please include your name and province. SMSes cost R1.50. By participating, you agree to receive occasional marketing material

We live in a world where facts and fiction get blurred
In times of uncertainty you need journalism you can trust. For only R75 per month, you have access to a world of in-depth analyses, investigative journalism, top opinions and a range of features. Journalism strengthens democracy. Invest in the future today.
Subscribe to News24
Related Links
Boycott South African Airways. Here’s why
SA Express: Pouring billions into a black hole
SAA to sell some of its stake to the private sector
Next on City Press
Eskom: Government must alleviate pain of rising electricity costs

Listen to our latest podcasts.
Voting Booth
Tourism Minister Lindiwe Sisulu’s comments on the Constitution and the judiciary has been termed an “extraordinary attack” that is “dangerous and regressive”. What are your thoughts?
Please select an option Oops! Something went wrong, please try again later.
She’s within her rights
11% - 50 votes
It’s all politics
25% - 114 votes
It was irresponsible
65% - 301 votes
Previous Results