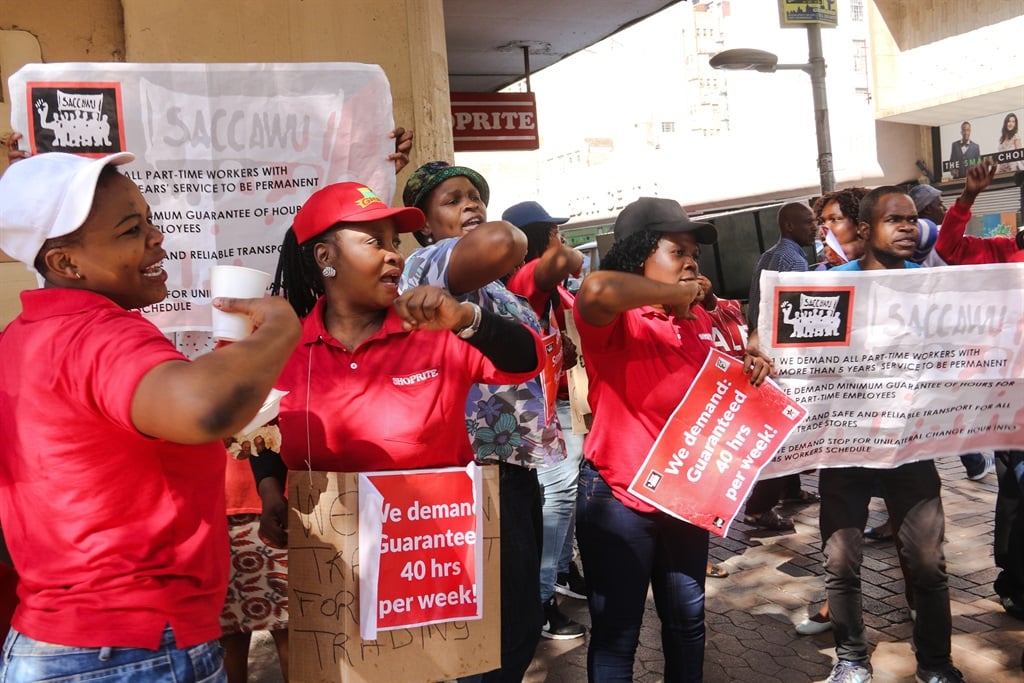 After a two-day picket, Shoprite workers say they will resort to a strike should the need arise.

The employees have been attempting to enter negotiations with the retailer’s management but say the company is not being receptive to their demands.

The workers are demanding full-time employment for employees who have worked at the retailer for more than five years and want transport to be provided for those who complete shifts in the evening.

“We seek assistance and support from the community to come and help us solve this problem of exploitation [from] Shoprite.”

Malatji said people who have been working there for decades have still not been offered permanent employment, which has had a “demoralising” effect.

“Now we are making an appeal to the community, to the citizens of South Africa, Zimbabwe, Nigeria, we are all here. Shoprite is all over. Let’s unite and fight against this retail giant,” he said.

Malatji said they are pleading with people to boycott Shoprite during the negotiation period until a resolution has been reached with management.

He said while they picket, Shoprite has made use of outsourced workers rather than engage with them.

“I would appeal to [management] to join hands and meet us halfway. We are not criminals, we are not hooligans. We are the employees of this company. What we want is simple – we want good working conditions,” he said.

After a mass strike last year, Malatji said: “Shoprite promised to speedily resolve the issues but now they are playing hide and seek.”

“All we ask for is 40 hours; we’re not asking for more,” said an outsourced supervisor at the Shoprite branch on Eloff Street.

She said the company also doesn’t compensate the employees for overtime when they have to attend to customers after work hours.

“We work hard for the company but 32 hours only gets you enough money for transport and one family pack so you can eat at home,” she said.

Another employee who has been a casual worker at Shoprite for 16 years is gravely affected by the lack of secure transport after her late shifts.

“I catch a taxi at Bree taxi rank but you find there aren’t many taxis and I end up arriving home at 11pm. I stay at Shoprite only because I need a job and my children need to eat.”

She said her work schedule has disrupted her family life and often causes tensions in her household.

“Sometimes I find my children already sleeping, I can’t even help them with homework.

“We just ask that Shoprite considers our struggles, considers that we have homes and children that we need to support,” she added.

The National Union of Metalworkers of South Africa (Numsa) has spoken out in support of the Shoprite employees.

“Numsa condemns the management of Shoprite for placing workers’ lives in danger by refusing to provide free, safe transportation for workers. The retailer has been allowed to abuse and exploit workers for far too long,” the union said in a statement.

Shoprite maintains that the picket represents a portion of employees and confirmed that its stores will operate as normal over the Easter weekend.

In a statement, the retailer said “it remains a priority to resolve the matters that have been discussed with the union over a period of time through the appropriate channels in the interest of both employees and customers”.

We live in a world where facts and fiction get blurred
In times of uncertainty you need journalism you can trust. For 14 free days, you can have access to a world of in-depth analyses, investigative journalism, top opinions and a range of features. Journalism strengthens democracy. Invest in the future today. Thereafter you will be billed R75 per month. You can cancel anytime and if you cancel within 14 days you won't be billed.
Subscribe to News24
Related Links
Shoprite workers down tools ahead of festive season
Shortage of medical supplies, clinic services affected as North West strike drags on
Saftu threatens mass strike if outsourcing is not addressed immediately
Next on City Press
Russia says Nord Stream 'sabotage' likely to be state-sponsored act