Covid-19 and its impact on the economy has also accelerated gender pay inequality. Picture: iStock

Renewed calls for reform on pay inequality in South Africa and across the world have been pushed to the fore by the Covid-19 coronavirus pandemic. There is now talk of “the great reset”, emphasising executive pay, gender pay gaps and racial income inequality.

In April, the Prudential Authority announced regulatory relief measures and guidelines to the banking sector in response to Covid-19. The authority acknowledged that the impact of the pandemic would most likely have a lasting and detrimental effect on the economy.

At the beginning of the Covid-19 pandemic, President Cyril Ramaphosa asked CEOs and Cabinet ministers to forgo a portion of their salaries, which they donated to the Solidarity Fund to mitigate the impact of the virus on employees and companies.

It is against this backdrop that financial services firm PwC this week released its 12th Executive Directors: Practices and remuneration trends report. It focuses on executive pay, pay inequality and pay disparity between men and women.

READ: Make it a criminal offence for companies to pay women less than men

According to the report, many companies have indicated their commitment to fair, transparent and responsible remuneration in their annual reports since the release of the King IV Report on Corporate Governance in November 2016. However, despite understanding the importance of narrowing the income gap, income inequality continues.

Stats SA’s Inequality Trends in SA report, which was released in November, found that women earned on average 30% less than men in the same jobs

Leila Ebrahimi, associate director for PwC SA, notes that the risks associated with income disparity and unfair pay within organisations still threaten the sustainability of the value executives have laboured to create.

She adds that proposed amendments to the Companies Act this year would bring the long-anticipated mandatory disclosure of the pay gap in companies.

“Further to this, with companies forced to implement tactical cost-containment measures, executive pay has come under the spotlight. Companies are focusing on new approaches to deal with executive remuneration. Many are looking at their pay packages with a critical eye, especially regarding increases and incentives.

“The pandemic has seen many companies doing the right thing – announcing pay cuts, the cancellation of bonuses, support for charities and putting a freeze on incentives,” she says.

READ: Gender equality is an achievable reality, not improbable ideology

The report questions just how much is enough when it comes to the CEO’s pay. It makes a comparative analysis of executive pay between CEOs locally and in sub-Saharan Africa. The publication focuses primarily on the JSE and seven African stock exchanges for the period between May 1 last year and February 29 this year.

Horak says the findings show that South African CEOs are paid higher than their counterparts in other African countries.

The median pay gap is moderate for CEOs at 15%. This gap markedly increases at the upper quartile in companies, with a pay gap of 37%

Covid-19 and its impact on the economy has also accelerated gender pay inequality.

Stats SA’s Inequality Trends in SA report, which was released in November, found that women earned on average 30% less than men in the same jobs.

Over the years, salaries have been the main source of household income in South Africa, accounting for more than 70% of overall income. Additionally, labour market income is overwhelmingly the largest contributor to income inequality when compared with other income sources, according to Stats SA.

The median pay gap is moderate for CEOs at 15%. This gap markedly increases at the upper quartile in companies, with a pay gap of 37%, says the report. 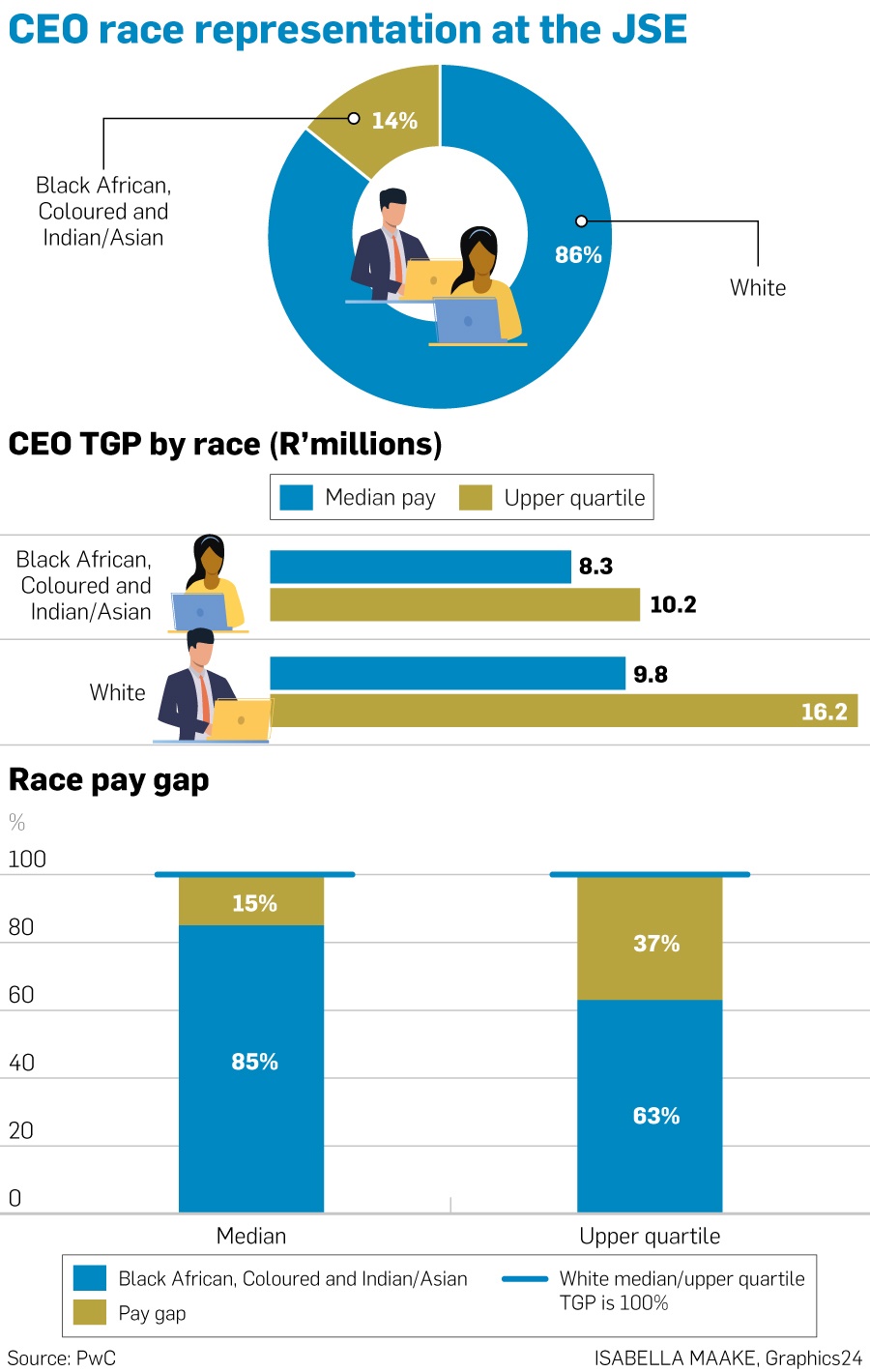 We live in a world where facts and fiction get blurred
In times of uncertainty you need journalism you can trust. For only R75 per month, you have access to a world of in-depth analyses, investigative journalism, top opinions and a range of features. Journalism strengthens democracy. Invest in the future today.
Subscribe to News24
Related Links
Women in South Africa earn 25% less than men
Gender equality is an achievable reality, not improbable ideology
The great alcohol, gender-based violence debate
Next on City Press
Consumers feel the pinch as inflation hits expected 5% mark