Act now : The seeds of a debt crisis have been planted Finance Minister Tito Mboweni doesn’t pull any punches and he was no different in his supplementary budget on Wednesday.

He told the country: “The South African economy is now expected to contract by 7.2% in 2020. This is the largest contraction in nearly 90 years. Inflation will probably register 3% in 2020, in line with the outcome of this morning [Wednesday].

“Commodity price increases and a weaker oil price have softened the blow, but as a small open economy reliant on exports, we have been hit hard by both the collapse in global demand and the restrictions to economic activity.”

The South African economy is now expected to contract by 7.2% in 2020. This is the largest contraction in nearly 90 years. Inflation will probably register 3% in 2020, in line with the outcome of this morning [Wednesday]
Finance Minister Tito Mboweni

As if that weren’t enough, he announced that “government will narrow the deficit and stabilise the debt at 87.4% of GDP in 2023/24. Cabinet has also adopted a target of a primary surplus by 2023/24.”

In short, the country has been forced to borrow to keep the nation going and respond to the imperatives imposed by the Covid-19 coronavirus pandemic.

Many opinionists were heard saying: “Here we go again.”

In an article in the Daily Maverick on Wednesday, Dick Forslund, a senior economist at the Alternative Information and Development Centre, said: “Finance Minister Tito Mboweni is creating panic before he tables the supplementary budget.

He is speaking of an imminent ‘sovereign debt crisis’.

“By doing so, he is pretending that the R1.8 trillion to R2 trillion state pension and unemployment insurance megafunds don’t exist – half of them currently placed on the shaky stock market. He believes nothing can be done to halt the $10 billion (R172 billion) to $25 billion in illicit capital outflows from South Africa every year.”

What Forslund, like many others, missed is that the minister was expressing a concern that is already felt by many on the continent.

I guess he missed the memo raising concerns about an impending debt crisis in Africa as debt levels grow.

Forslund and others may be less concerned that, as of 2017, 19 African countries have exceeded the 60% debt-to-GDP threshold set by the African Monetary Cooperation Programme for developing economies, while 24 countries have surpassed the 55% debt-to-GDP ratio suggested by the International Monetary Fund (IMF).

Surpassing this threshold means that these countries are highly vulnerable to economic changes and their governments have a reduced ability to provide support to the economy in the event of a recession (World Bank, 2019).

Finance Minister Tito Mboweni is creating panic before he tables the supplementary budget. He is speaking of an imminent ‘sovereign debt crisis’
Dick Forslund

More worrisome is whether the looming debt crisis will be different from the “first debt crisis”, which was incubated in the 1980s, hit in the 1990s and was (partly) resolved in the 2000s.

The situation is again profoundly uphill for a growing number of African countries – last year, their debt repayments as a percentage of revenue were higher than in 2001 – before the last round of debt relief.

We may remember the heavily indebted poor countries (HIPC) initiative – a group of 39 developing countries with high levels of poverty and debt overhang that were eligible for special assistance from the World Bank and the IMF.

For the first time, these countries had their debt written off, with rich Western countries picking up the bill. They were expected to build up their economies with the space gained from debt relief, benefiting from increased access to finance, especially in the private sector.

That was the case between 2008 and 2009. For some countries, borrowing has been the easy path to finance development objectives, instead of raising tax collection, which is politically complicated. The positive cycle of money inflows kept growing between 2016 and 2017, as did the liabilities.

But now it has stopped, and debt repayments are once again threatening to tip over into a debt crisis. This is what the minister is warning against. I believe Mboweni is prudent to warn that, while debt is a global issue, Africa’s past debt crises were devastating, creating the need to cautiously monitor this recent debt build-up.

I guess I would be speaking for him when I suggest that there are parallels between the current rising debt on the continent and the HIPC period that offered solutions to prevent another crisis.

Lest we forget, the events that led to HIPC and the Multilateral Debt Relief Initiative started in the 1960s from a public spending spree by recently independent countries to stimulate their economies through rapid investment in industry and infrastructure projects.

Commodity booms and heavy use of external debt supported this spending as policy leaders relied on future export earnings and economic growth to improve the capacity to service the debt. Notably, those countries did not reduce expenditure during negative commodity shocks and, instead, took on more loans.

South Africa is faced with two gates – a broad gate to bankruptcy and a narrow gate to prosperity. And if the country did not act now, it would soon find itself on the path to bankruptcy, Mboweni warned this week.

By doing so, he is pretending that the R1.8 trillion to R2 trillion state pension and unemployment insurance megafunds don’t exist – half of them currently placed on the shaky stock market. He believes nothing can be done to halt the $10 billion (R172 billion) to $25 billion in illicit capital outflows from South Africa every year
Dick Forslund

At the time, three key factors drove the subsequent debt crisis – the global recession in the 1980s, the rise in interest rates in developed countries, and a decline in real net capital inflows, which was largely due to the real negative interest rate in many countries.

The big question is: Are we there yet? Not really. But as of April last year, according to the IMF, half of African low-income countries (these exclude South Africa) are either in debt distress or at high risk of being so. Transparency gaps suggest stocks are significantly higher than accounted for, so the problem is worse than officially noted.

Debt repayments are now so high that they are squeezing out social investments, undermining the fight against poverty and inequality. With commodity prices very low, interest rates growing and exchange rates falling, less money on worse conditions is now arriving in Africa: the net flow is still positive, but declining.

Even countries at only moderate risk of debt distress are heavily cutting social spending. Kenya’s debt repayments as a proportion of its revenue tripled in two years; while, in Uganda’s 2019/20 budget, interest payments will be the second-largest expenditure, with spending on the key sectors of health, education and agriculture cut by 12%.

The truth is that, yes, we are facing a serious crisis. Mboweni was correct to warn that “we are still some way from [the gate to bankruptcy]. But if we do not act now, we will shortly get there.”

Mboweni’s caution is based on the fact that the downturn brought on by Covid-19 will add to South Africa’s debt burden, which is now projected to be close to R4 trillion, or 81.8% of GDP, by the end of this financial year.

This is compared with an estimate of R3.56 trillion, or 65.6% of GDP, projected in February.

Sadly, now the automatic reaction is not to call for massive debt cancellation, as we did 20 years ago. However, while that was a necessary call, and some countries do need a total write-off – for example, Somalia – the priority now should be ensuring long-term financing on conditions that don’t undermine sustainable social development and economic growth.

This may mean growing the tax base and tax collection, plus ensuring flows that don’t put an extra burden on already vulnerable economies.

For that purpose, concessional flows are badly needed, especially aid.

Another suggestion is for lenders to focus on making more responsible lending decisions, following due process in authorising loans and possibly stipulating limits, as a debt crisis poses risks to borrowers and lenders alike.

This needs the development of new lending codes or a revision of existing ones to adjust to nontraditional actors. These codes should be enshrined in law so that participating countries adhere to them.

Lastly, there is a need to streamline the lending process to reduce the number and scope of conditions to respect national sovereignty, and reduce the burden associated with accessing loans.

The World Bank could also increase the lending programme to middle-income countries that still face development challenges such as inequality, rapid urbanisation and a reluctant private sector.

South Africa is faced with two gates – a broad gate to bankruptcy and a narrow gate to prosperity. And if the country did not act now, it would soon find itself on the path to bankruptcy, Mboweni warned this week
Chris Maxon

Better engagement with these countries will enable them to consolidate their development gains and make substantial economic and social progress.

The alternative is a waterfall of defaults that will then lead to a new HIPC, with Africa’s people suffering the most while creditors take heavy losses.

We are running out of time.

While others suffer a myopia in their outlook, I believe the minister is correct to warn that the seeds of a serious debt crisis have been planted. If no one is moved to take action, with most recommendations falling on the long-term prevention side, letting time pass will only aggravate the problem.

Maxon is a public servant and a social commentator 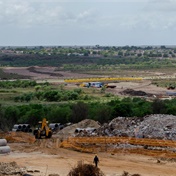 Choose a newsletter
Voting Booth
South African truck drivers have threatened to not return to work and instead allow foreign nationals to be at the forefront of the trucking industry should employers continue with their preferential hiring tendencies/ if things don’t change.
Please select an option Oops! Something went wrong, please try again later.
Agree. Put SA first
44% - 24 votes
Foreigners have rights
18% - 10 votes
It smacks of Xenophobia
38% - 21 votes
Previous Results
Podcasts
Podcast | Mistakes to avoid with your own business