With SA’s fiscus in crisis, exacerbated by the aid package to Eskom, Treasury needs R120bn – and is desperately trying to plug the gap.

South Africa’s finances are in serious trouble, and the best way to plug the gaping hole in the fiscus may be for all state employees to take a 10% cut in salaries and wages.

This is the stern warning of National Treasury’s director-general, Dondo Mogajane.

He told City Press last week that the government had a R120 billion gap to plug as a result of having to accommodate a R59 billion Eskom bailout as well as an expected significant shortfall in tax revenue for the fiscal year ending March 2020.

Although revenue collection amounted to R175.8 billion in the first two months of the tax year – up by 6.8%, compared with the same period last year – this increase rate was not nearly enough.

The required increase rate to achieve the tax collection target of R1 422 trillion, announced in February’s budget speech, is 10.4%.

If the current 6.8% increase rate is sustained for the rest of the fiscal year, the SA Revenue Service (Sars) will miss its target by R46 billion.

“National Treasury’s box is empty,” Mogajane told City Press on the sidelines of an event hosted by the SA Insurance Association in Johannesburg last week.

“Growth is not coming through and tax revenues are not there. We are in trouble. The government needs to reduce spending.”

In his address to those attending the event, Mogajane said the public controversy swirling around new Sars commissioner Edward Kieswetter was adding to the country’s fiscal woes.

Not only was Kieswetter under tremendous pressure to get the tax agency back on track, but he was also being subjected to “a number of South Africans questioning the process used to appoint him”.

“It is making it almost impossible for him to focus on tax collection,” Mogajane said. 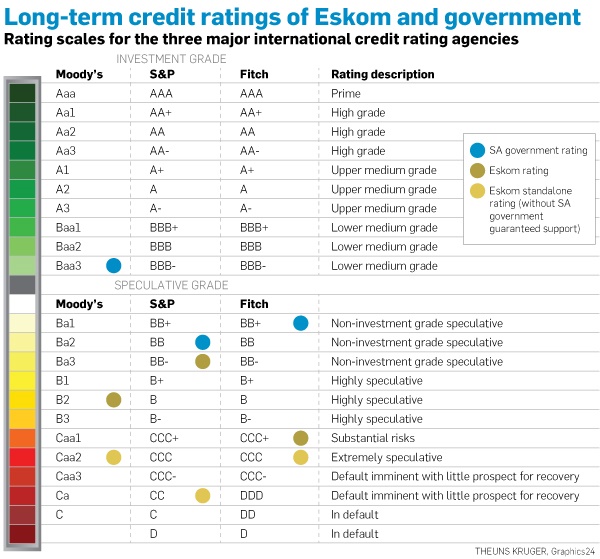 The R59 billion bailout for Eskom announced by Finance Minister Tito Mboweni last week comes on top of the R69 billion he unveiled during his budget speech in February.

This brings the total bailout granted to Eskom this year to R128 billion.

In his state of the nation address delivered last month, President Cyril Ramaphosa said Eskom would receive R230 billion from the government over the next 10 years, in tranches.

Only R26 billion was meant to be released in this fiscal year, with R33 billion following in the 2020/21 fiscal year.

But Eskom’s dire situation – coupled with the fact that it is central to South Africa’s economic functioning and cannot be allowed to collapse – has forced the state to hugely overshoot its financial support package.

This, despite Mboweni stating firmly in his February budget speech that “pouring money directly into Eskom in its current form is like pouring water into a sieve”.

Questions arose last week about what conditions were attached to the latest bailout.

Mogajane said these conditions would be revealed when Mboweni announced the new Eskom chief restructuring officer (CRO), adding: “We are looking at a number of candidates for the position of Eskom CRO.”

Mboweni said that the unbundling of Eskom into three units would proceed as a matter of urgency.

Eskom is set to release its financial statements for the year ended March on Tuesday, after having delayed the release twice.

It could report a record loss of R25 billion.

Last week’s bailout will enable the power utility to move from being bankrupt to being assessed as a going concern, and also enable its results to be signed off by auditors, allowing for them to be released.

WAGE CUTS MUST BE EXPLORED

Mogajane told City Press that government could plug the huge fiscal gap in two ways: by entering into negotiations with public sector trade unions to cut wages, and by reallocating existing budgeted expenditure.

“If we are going to be serious – without people losing their jobs – let us reduce the salaries and stop the bonuses. Let us go back to labour and plead and renegotiate wages. One option I am considering is our taking a 10% cut in our salaries,” he said.

However, this proposal is unlikely to find favour with the unions.

In response, Mugwena Maluleke, general secretary of the SA Democratic Teachers’ Union, said: “Salaries are benefits and are subject to negotiations.”

He added that such a move would “be met with workers’ might”.

Tahir Maepa, deputy general manager of the Public Servants’ Association (PSA), said that while the union was willing to assist government to get out of “this self-inflicted tragedy”, it would not let workers “be the burden bearers of wrong and reckless political and economic decisions”.

“Any talk of cutting salaries and benefits will be met with hellfire,” he said. “What we should be doing is to arrest and recover lost revenue and hold those responsible for this accountable.”

Richard Mamabolo, spokesperson for the Police and Prisons Civil Rights Union, echoed this sentiment, saying it would be wrong to make public servants the ones “who are penalised at the expense of those looters who fail to make state-owned enterprises functional, while getting huge bonuses at every turn”.

Nedbank economist Isaac Matshego said that the government should reallocate budgeted expenditure in order to minimise the effect rendered by its latest bailout to Eskom on the country’s credit rating.

Mogajane said taking on more debt through issuing state bonds and borrowing from multilateral organisations was a distinct probability.

“As a result of the R59 billion Eskom bailout, government debt is obviously going to increase. Our debt is going to go way beyond what it is.”

He said government needed to be open to borrowing from multilateral financial institutions. “We should not be afraid to go to the Brics Bank [the New Development Bank], the African Development Bank and the World Bank and say: ‘Let us diversify our debt portfolio.’”

The last resort government would use to plug the gap would be to hike taxes next year, said Mogajane.

“We may be very limited on the tax option side because tax hikes will hurt the economy more.”

Economists are forecasting that the government’s budget deficit could climb from 4.5% to 6% or higher.

Mogajane agreed, saying the increase in the state’s budget deficit could be about 6% as a result of its bailout of Eskom and other factors.

ESKOM SHOULD BE A ‘CASH COW’

Ratings agencies and economists reacted negatively to news of the latest bailout.

Fitch Ratings on Friday moved the outlook for its rating of the South African government from ‘stable’ to ‘negative’, which means it could downgrade the rating deeper into ‘junk’ status in future.

Moody’s said the bailout would “be credit negative for South Africa because it would be an additional drain on fiscal resources”.

Moody’s is the last credit rating agency to have South Africa on investment grade – S&P Global and Fitch rate the country at “junk” status.

While noting Moody’s reaction, Mogajane said: “We don’t have a choice.”

He expressed confidence that the agency would give the country a reprieve until after the medium-term budget policy statement in October, before making a decision on the country’s rating.

Anton Eberhard, a professor at the University of Cape Town’s Graduate School of Business, reacted to the latest Eskom bailout by saying: “It makes me sick to my stomach ... Eskom should be a cash cow, not a hungry dog.”

Read more on:
national treasuryeskomeconomy
WINNING WOMEN
for subscribers
Winning Women | Poetry is about telling stories to the world