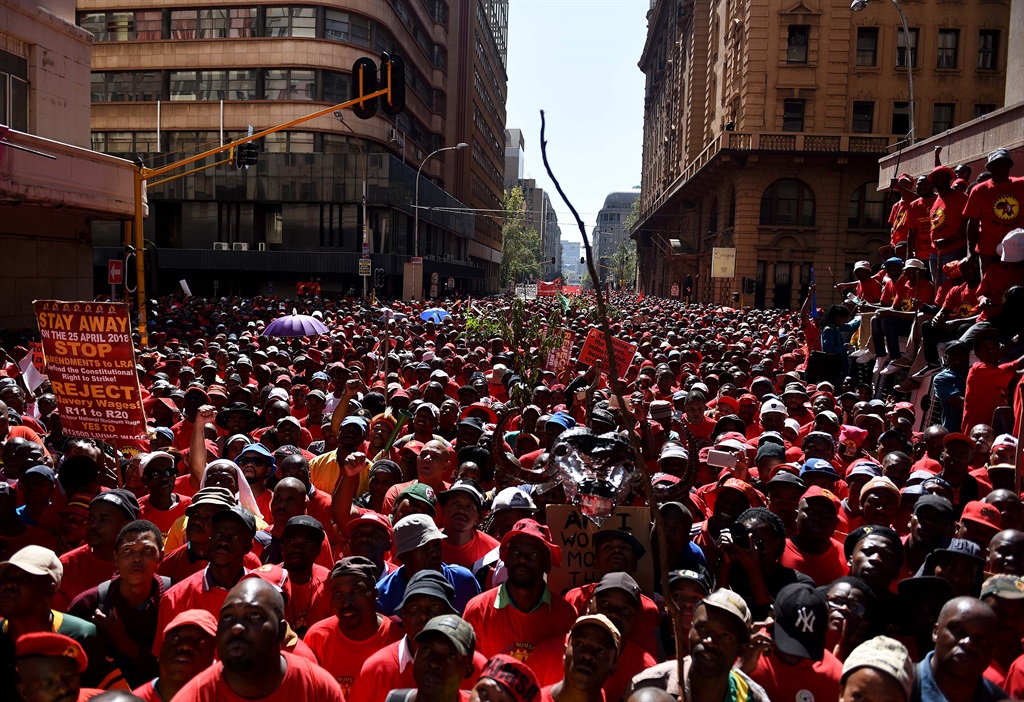 Unions have come out strongly against the process involved in making changes to various labour laws, including the national minimum wage bill.

Among their issues is that some unions were not invited to make submissions regarding the proposed changes, and also that the consultation process was improper and inadequate.

“Other working class organisations – including the South African Federation of Trade Unions (Saftu) – have been excluded from making submissions to the National Council of Provinces.

The secretary of the special committee advised us that Tuesday was the last day of submissions and that no other submissions will be accepted for consideration.”

Saftu and Numsa believed that the government could do much better than the proposed national minimum wage of R20, R18, R15 and R11 an hour.

Moreover with the impact of the VAT increase, fuel hikes and overall cost of living having exacerbated the suffering of ordinary workers.

“The state wants to silence opposition to these laws,” said Hlubi-Majola.

“We too were not notified about the submissions by the National Council of Provinces. We merely found out through the media as a media organisation had published an article where the Congress of South African Trade Unions was making submissions and only then did we go make the submission, only to find that Tuesday was the last day of submissions and no other submissions will be accepted for consideration. This is unacceptable!” said Hlubi-Majola.

Tens of thousands of workers loudly and resoundingly rejected the proposed changes in several demonstrations which were held in March and April, though they have been ignored.

Two weeks ago the National Council of Provinces’ Select Committee on Economic and Business Development called on all South Africans to make use of the opportunity to influence discussions on the National Minimum Wage Bill and related legislation.

At the time, the chairperson of the select committee, Mandla Rayi, said the committee always welcomed the opportunity to engage with South Africans in legislation-making.

“The National Minimum Wage Bill will have a long-lasting impact on the lives of the poor. It is a caution that the fifth administration is putting in place to seek to protect those vulnerable workers whose suffering is not remunerated fairly in the workplace,” Rayi said.

The committee accepted that, as with any other piece of legislation, there will be proponents and opponents, but the need to uplift South Africans from poverty is everyone’s responsibility.

Rayi said the committee would ensure that a diversity of views was heard on all four pieces of legislation that will enable the introduction of the national minimum wage.

“This is the participatory nature of our democracy and the committee is excited to once again take this process to the people,” he said.

The committee was contacted for comment on Wednesday and promised to get back to City Press, but by the time of publication no comment was received.

“Numsa condemns the council of provinces for this position. We were not properly informed in time that these hearings were taking place and we found out at the last minute through the media. This confirms what we have always believed which is that the consultation process has been improper and inadequate ... It is clear that this process has always had a pre-determined outcome and that the ‘consultation’ was nothing more than a rubber stamping exercise designed to justify the unjustifiable,” said Hlubi-Majola.

Saftu has resolved to mobilise the working class to reject these new laws.

“Despite the National Council of Provinces not giving us an opportunity to express our disagreement with these laws, we shall continue to campaign against these laws to be replaced by a living wage that can extend and protect the workers. We shall ensure that these legislations are scrapped, because it will be virtually impossible for workers to legally strike should the employers and the workers fail to come to an understanding at the decision table,” said Saftu spokesperson Patrick Craven.

“We will not celebrate the proposed poverty national minimum wage. No one can raise their family on such low wages,” said Hlubi-Majola.

“Numsa supports Saftu’s call for protest action and we will be involved in intensifying mass action all over the country against this unrelenting attack on our hard won rights as labour.”

We live in a world where facts and fiction get blurred
In times of uncertainty you need journalism you can trust. For only R75 per month, you have access to a world of in-depth analyses, investigative journalism, top opinions and a range of features. Journalism strengthens democracy. Invest in the future today.
Subscribe to News24
Related Links
Labour law amendments met with mixed reactions
Trust is key to SA’s poor labour-employer relations
Ramaphosa is the Trump of SA – Numsa
Next on City Press
Using micro-transport to address some of SA’s transport challenges Read more on:
saftulabour lawsnumsa
Podcasts
Podcast | How to pay off your home and car