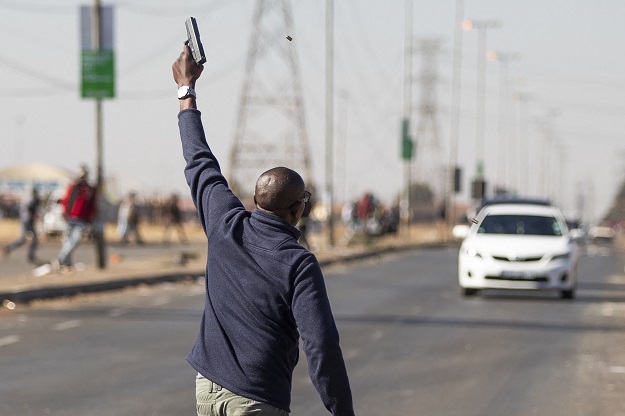 A man fires a hand gun in the air to disperse a mob of alleged looters outside of the Chris Hani Mall in Vosloorus. Photo: Guillem Sartorio/AFP
GUILLEM SARTORIO / AFP

Last weekend I met someone who regrets the fact that the recent unrest, looting and general destruction was so short-lived.

He would have wanted it to last longer. He benefited immensely from it. No, he is not a looter. Well, now that I think about it, I could call him a looter of a special kind.

But that’s not how you start a story. So, let’s tell this story properly.

Before the advent of Covid-19 – oh, what a long time ago that was! – going out to a restaurant or to a pub for a drink was almost as natural as breathing.

READ: Close Up | Let us not allow ourselves to be used as canon fodder

Suddenly, before venturing out, we had to think about masks and hand sanitiser. Then, as more of our loved ones succumbed to the pandemic, the very thought of going out – even stepping out to get milk and bread – became a serious affair.

Restaurants and bars became a no-no for many of us. Gone were those spontaneous braais that many of us used to throw. If you wanted to meet someone – a friend, colleague or even a relative – at your house or theirs, again you had to think very hard about it first.

Against this backdrop, the arrival of this previous long weekend that incorporated Women’s Day was not greeted with the same excitement as it would have been in those long-ago days before the pandemic.

When a friend invited me over, I was reluctant. To finally get me to come, he had to remind me that I am a journalist who would take an interest in the person to he wanted to introduce me to. Because this friend of mine is not known for hyperbole, I had to relent to the invite.

For whatever reason, somebody started talking about guns: whether or not it was a good thing to own a gun. And, if one did own one, whether it was good to carry it on their person whenever they went out.

I am glad I did. There we were with my friend and a group of his friends at this outdoor venue. Even though the tables and chairs were properly spaced out – in keeping with Covid-19 protocols – and even though the spot was outdoors and the group was really small (only six people), I was still not comfortable.

I kept my mask on, lifting it every now and then to take a sip of my whisky. How ridiculous and comical it now sounds.

It would have been rude of me to say to my friend: “Well, here I am, introduce me to the person you said you wanted to introduce me to.” So, I sat back and went with the flow. We spoke about football, about the weather, about politics.

For whatever reason, somebody started talking about guns: whether or not it was a good thing to own a gun. And, if one did own one, whether it was good to carry it on their person whenever they went out.

Somebody ventured the thought that if you carried the gun wherever you went, you could open yourself to attacks by people wanting to rob you of your gun. Also, if you carried a gun, were you likely to pull it when, say, you got caught up in an argument or a road rage incident?

Somebody told a harrowing story of how a family on the East Rand was burgled, and the intruders proceeded to assault the mother and her female children while her husband watched.

Somebody argued that the man could have saved his family the ordeal had he been a gun owner. On and on the exchange went.

Then one guy in the group revealed that he was a gun salesman. When my friend gave me a knowing look, I immediately understood that this is the man he wanted me to meet.

Some were buying new guns, others buying hundreds of rounds of ammunition. They were people of all races. The eldest was a white man of 78.

Obviously, the gun seller had a lot of stories to tell about the beauties of owning a gun. But one story that stuck with me related to the recent riots and the attendant looting.

He said in the four days during which the looting raged in Johannesburg, he made R800 000 in gun and ammunition sales.

That revelation shut us up immediately. We leaned forward to listen to his story. He said that on the day the looting started, security at his shop’s premises was upgraded in anticipation of the disorder.

Then a wave of people arrived. But it immediately became apparent that these people were at the shop in good faith. So, after being searched, they were let inside in small groups.

Bearing gun licences, they were here to buy. Some were buying new guns, others buying hundreds of rounds of ammunition. They were people of all races. The eldest was a white man of 78. He told the salesman that he lived alone in a flat and felt unsafe – hence the need for a gun.

READ: Close-Up | Rampad, Bushiri and decuplets: A nation of miracles

Other buyers were representatives of security companies.

“In just four days, I personally pushed sales to the value R800 000. Other colleagues had their own figures as well.”

That is why the man thinks the unrest was such a blessing, such a boon, and jocularly asked: “When are they starting again?”

Makes you think, doesn’t it?

We live in a world where facts and fiction get blurred
In times of uncertainty you need journalism you can trust. For only R75 per month, you have access to a world of in-depth analyses, investigative journalism, top opinions and a range of features. Journalism strengthens democracy. Invest in the future today.
Subscribe to News24
Next on City Press
Close-Up | Dressing Team SA for Olympics no easy win in absence of shared nationhood